General Stephen Draper -
-6.8k
Path of Exile Shaping Before you start shaping your Path of Exile Atlas, we suggest you read our introduction to the Atlas. Once you have...
Featured image via CNN.

Visa denials were just the tip of the iceberg. In the wake of one of America’s most controversial elections, President Trump signed an executive order that temporarily halts people from seven countries from entering the United States [Full text of the executive order is available here]. It’s plunged the USA into a state of chaos, with people being turned away at the airport and protests springing up across the nation. What does a travel ban like this mean for Dota, a global esport that features players from a wide range of backgrounds?

Aliwi “w33” Omar and Kuro “KuroKy” Saleh Takhasomi are both dual citizens in one of the seven blacklisted countries. W33 was born in Syria but raised in Romania–as of right now, it seems that he’s still living in the Digital Chaos teamhouse in Arizona. Kuro is a dual Iranian and German citizen. Unfortunately, dual citizenship doesn’t help them here.

Right now, it seems like w33 wouldn’t be able to leave the USA to participate in another tournament, as he wouldn’t be able to get back in again. Kuroky can’t come here to play in the first place. I thought about tweeting @DigitalChaos and asking them what arrangements they had made for w33 and Resolut1on (a Russian native) in regard to work visas/green cards, but they probably don’t want to disclose any information to the public about their immigration status right now.

Even after the ban expires, the rise in xenophobic sentiment in America will be hard to ignore. Regardless of your political views, it’s hard to argue that the executive order make the USA seem like anything other than an unwelcoming place to foreign esports professionals.

I don’t purport to speak for anyone, but I wonder how someone like SumaiL feels about the state of politics in the US. He’s a Muslim immigrant, living the “American Dream”–coming to the United States with his family, little money, but finding unexpected success and fortune through hard work and dedication.

It’s time to have a discussion about whether it makes sense, in light of the immigration uproar to move The International 2017 to a less tumultuous location.

I get it, Valve. Holding a large tournament in the same city as your central offices makes sense. Instead of paying for travel and hotel accommodations, staff can stay at home and commute to the venue. It’s certainly less disruptive for them too. I live 1.5 hours from Seattle now–I love the fact that The International is held there yearly.

That being said, the current political climate in the United States isn’t exactly the friendliest for international visitors. Dota fans from one one of the seven countries named in the executive order may not feel safe trying to book a visit to the US, even if the ban is later rescinded. The atmosphere is America is tense, bringing out strong feelings from both sides of the political aisle. I’d definitely have second thoughts about travelling here for TI7 from any country–it’s too unpredictable right now. Granted, TI7 is several months away, but international visitors have to start making travel plans far in advance.

Valve may want to consider moving TI7 to Vancouver, BC, Canada. It’s relatively close to Seattle (as far as ‘close’ goes in North America). Canada, while difficult to immigrate into, has issued a statement welcoming refugees. International players and fans may find it a more amendable location to visit later this year.

Something to keep in mind: Digital Chaos released both subs (USH and SirActionSlacks) from their roster. If w33 can’t leave America to play overseas, they might be ringing up Slacks to stand in at tournaments.

Previous articleThe Best Dota 2 Valentines Day Cards on the Internet
Next articleDota 2: How to Win the Dark Moon Event 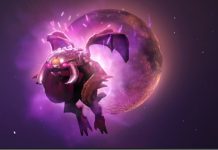