Path of Exile Stephen Draper -
-7k
PoE Juice is an Art — One That Pays Well! In Path of Exile, properly juicing up your maps...
(Screenshot by Esports Edition.)

If you are a new player learning how to play top lane, it is important to understand the unique duties of this position. This League of Legends top lane guide goes over the basics of top lane strategy, including roles, Summoner spells and useful tips for staying alive, applying pressure and reading your lane opponent.

There are two ends of the spectrum when it comes to the pool of viable champions in top lane: carries and tanks. Carries are pure damage dealers like Jayce and Yasuo, and tanks like Maokai or Ornn generally build towards maximum tank to complement their crowd control (CC) abilities. Champions that fall somewhere in between like Darius or Yorick — the fighters — usually start with one or two damage items and transition into tank items as the game progresses. Knowing your role is a crucial first step towards performing the duties of that role well. Let’s get into the League of Legends top lane guide even more.

First thing’s first for the League of Legends top lane guide: pure tanks deal moderate amounts of damage in the early to mid game, while remaining supremely tanks at all stages of the game. Even if they don’t deal tons of damage, tanks can carry a game by having successful team fights or making plays around the map. Between the early and middle game (levels 6 to 13), tanks usually have enough damage to target ADCs or squishy mid laners in team fights, but their late game damage is not high enough to let them continue focusing on carries exclusively. Late game Maokai, for instance, has to be a little more judicious when casting Twisted Advance-W into the other team’s backline during late game engagements than he does in the mid game.

However, what tanks lack in damage they make up for in reliable crowd control. Knock ups, stuns and taunts are premium abilities in team fights, and landing a 1.5-second CC on an enemy carry can singlehandedly turn the tides of a fight. By building tank and picking up cool down reduction items, tanks can cast more spells during team fights, thus contributing more crowd control and extra damage.

Buying lots of ability power or attack damage is bad for tanks because the AP/AD scaling on their abilities are quite low. You also mortgage your late game tank for a small spike in damage. Sunfire Cape, Abyssal Mask, Iceborn Gauntlet and Titanic Hydra (on Shen) are all acceptable tank items because they increase your damage and tank.

Fighters deal medium to high damage in most stages of the game but are tricky to pilot in late game team fights because they aren’t as difficult to kill as tanks. Most fighters start their builds off with essential damage items like Black Cleaver (Renekton, Darius, Gnar) or Trinity Force (Irelia, Yorick, Nasus). Fighters can keep building damage if they are snowballing, or opt for tank if they are even or want to be conservative. Many fighters are good counter picks against tanks.

Fighters excel when they are able to flank a team fight or use their mobility to get past the other team’s meat shields and disrupt the backline. Additionally, fighters will hit a massive power spike when they finish building their essential damage item. Once they have got this item, a fighter often has no rival on the map, and if they are snowballing, they have a lot of freedom about whether to team fight or split push to take objectives. Since fighters hedge their bets by building a mixture of damage and tank, they are neither tank enough to dive into team fights head on nor threatening enough to disregard strong peels from a Thresh or Janna. As a result, their scaling is often worse than that of the tanks or glass cannon damage carries.

Full damage carries are perhaps the trickiest champions to pilot out of all the top laners but their damage scales impressively, allowing them to split push into the late game. Carries like Jayce or Kennen can bully most lane opponents for the duration of the game, but they have trouble finding optimal team fights. Full damage carries are best suited as split pushers and keeping their lane opponent locked in the 1v1 where they have a certain advantage. Even more so than fighters, the glass cannon carries have to flank a team fight to be effective.

Summoner Spells in the Top Lane 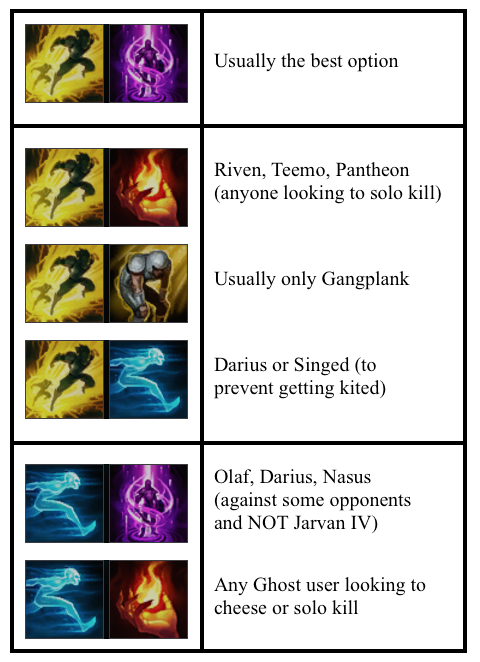 Flash is the best Summoner spell in the game, and you should rarely consider not using it. Use Flash to start a team fight, evade tanks and skill shots, or to blink over wall. There’s not a single wall on Summoners Rift that you cannot Flash over. Some top laners — Singed or Olaf — may use Ghost instead of Flash, but outside of a couple exceptions, you should always use Flash.

As far as your other summoner spell for top lane is concerned, there is slightly more room for experimentation. If you want to follow the pro meta, use flash/teleport every time. A well-timed Teleport can win a game and you will rarely get that kind of impact from any other summoner spell. The biggest thing to consider with teleport is how much farm you are giving up to your lane opponent when you use it. If you can use Teleport to get to bot lane, get a kill and claim the first turret, it is usually worth it. But if you risk giving your lane opponent the first tower or more than a wave of minions, you may want to reconsider using teleport. 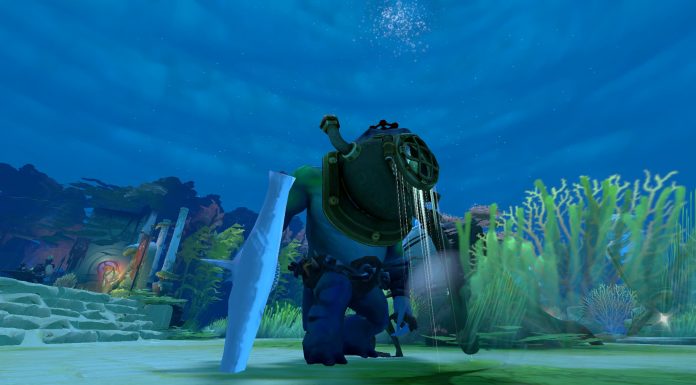 However, there are other viable combinations besides flash/teleport. Ignite, ghost and exhaust are the most popular secondary options, and these summoner spells can sometimes help you win your lane more than a teleport would. On the other hand, losing your global map presence by sacrificing Teleport raises the stakes of your own lane. Knowing you never have teleport, smart enemy junglers will look for opportunities to punish you with tanks. Heal, cleanse, barrier and smite are garbage summoner spells in top lane, and you shouldn’t even consider them unless you have a very specific strategy planned out.

You don’t need to prove how much better you are than your opponent level one. Be patient, and plan out your aggressive plays — don’t go ham just because you think your opponent is bad, otherwise you are setting yourself up to be punished. If you are playing a tank, your time to shine is teleport plays and team fights. Fighters are waiting on item power spikes. Glass cannons are building up momentum with their unrelenting damage and should stay in lane for farm and experience. Top laners can be threatening to under-leveled bot laners or junglers solely off a level advantage.

You might have heard the expression “top lane is an island,” but it is not true. Junglers have a huge impact on the outcome of the laning phase, and since both top laners usually have teleport, both of them can have an impact elsewhere on the map.

Having good map awareness is an important skill for every League of Legends player — if you don’t know the whereabouts of the other team’s jungler and your lane opponent steps forward aggressively, it is either an incoming tank or a bluff. Is it worth it to call their bluff?

If you can put yourself in your opponent’s head, remember that they are probably worried about your team’s jungler as well. If your jungler shows in bot lane, your opponent now has the liberty to play more aggressively and may decide to Flash on you.

League’s matchmaking is wonderful thing because it supplies you with a steady stream of challenging players. In some games, your opponents might play like beginner bots, but in other games, you will get dumpstered by a player who’s simply far better than you. If you are losing your lane, take the opportunity to learn from your opponent.

Pay attention to their positioning around the minion wave, since this is usually the first place a better player gains an advantage. Did they make better trades against you? Did they farm better? Were they craftier? You may not be aware of your own skill ceiling until someone schools you on one of your best champions. Incorporate their strategies into your next game and you’ll slowly become a better player.

Next articleDoes the League of Legends Honor System Work?