General Stephen Draper -
-6.8k
Path of Exile Shaping Before you start shaping your Path of Exile Atlas, we suggest you read our introduction to the Atlas. Once you have...
Weldon Green Interview. Photo Via Riot Games' Youtube Channel

Weldon Green will no longer be coaching North America’s biggest League of Legends team, TSM. At least not full time.

In a recent statement issued by TSM, titled “Thank You Weldon,” the organization announced the departure of coach and sports psychology trainer Weldon Green. The release praised Weldon for the impact he had on the Team SoloMid roster in terms of managing internal relations and turning the players into real competitors.

TSM finished the summer split with a 17-1 record under Weldon, and won the NA LCS finals by beating C9 3-1 shortly after.

In typical TSM press release fashion, the organization was very open about the reasons Weldon will no longer be a full-time coach with the team:

Despite the positives of working with Weldon, we have decided to mutually part ways. We found that working with him in short periods of time proved to be more effective and will instead continue to consult and work with him for bootcamps.

In addition, TSM also felt the need to clarify their stance on the importance of Korean bootcamps:

Team SoloMid as an organization has always valued our bootcamps leading up to worlds in Korea, and we have always been extremely grateful to the top Korean teams that choose to scrim with us. These scrims have traditionally been some of the best practice our team gets in the competitive season, and we always learn a great deal during these bootcamps.

We actively choose to remain on good relationships with our Korean scrim partners because we find that they are extremely beneficial to our team’s development as a whole. The statements that were made do not reflect the organization’s stance and beliefs towards them whatsoever, and we strive to keep these partnerships strong and healthy for the benefit of all.

It’s clear TSM as an organization doesn’t share the same views Weldon vocalized at the end of this past Worlds event. Weldon suggested that Korean teams make it difficult for Western teams to arrange scrims, and when they do allow scrims, they share information about the Western teams to benefit fellow Korean teams.

Although the statement out of TSM suggested that they could join forces with Weldon on a contract basis going forward, they end the release with an open invitation for “skilled sports psychologists” to apply for the vacancy left by Weldon.

The full press release can be read here.

I can finally announce my next project! Stay tuned ;0

Where will Weldon go next? It sounds like we will find out soon. Until then, I’ll be over here fantasizing how C9/CLG Weldon could spice up an old school North American rivalry. 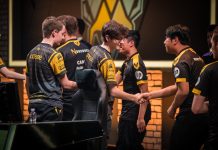