What makes a good play? Is it mechanically remarkable? Strategically innovative? Maybe the best plays are the most exciting plays. Or in a case like Worlds, where teams ebb and flow and the metagame narrows as the tournament runs its course, the best plays are the ones that turn around a losing streak and send opponents back to their home countries. The best plays define a match, or even end it on the spot. Selected them from a total of fifty-one games over eight days of competition, these are the six best plays from the Group Stage of Worlds 2017.

You are probably well aware of the dumpster fire that was TSM during Worlds, but here is one moment where TSM had the courage to make a play. With Baron buff and super minions already pushing down mid lane, TSM uses Tristana to make quick work of the top tower. After losing their tower, Flash Wolves attempts to protect their inhibitor by pushing back against TSM. Pay attention to Hauntzer’s Gnar, who is free-hiting Cho’Gath from the side and building his rage bar. Sensing a re-engage from TSM, SwordArT pops Taric ultimate, but Hauntzer perfectly waits out the invulnerability to land a five man stun just as Cosmic Radiance expires. Although a well-placed Cho’Gath Rupture prevents Doublelift from going off in this fight, the roar of the crowd really makes this moment special in the early stages of Worlds. (This was before TSM crashed and burned, of course).

Similar to Alistar, what makes Rakan’s initiation so powerful is that he can Flash and CC you before you have a chance to respond. That’s what Wolf did against EDG, and he did it from practically off-screen, catching EDG massively off guard. SKT chained a four-man Quickness charm into a three-man Rupture into a four-man Shockwave while Bang’s Twitch was free-firing. Entering this fight, EDG had a 10k gold lead and the game looked like it was in the bag. Moments later, it didn’t even seem like EDG had a chance.

With AN’s Kog’Maw sitting awkwardly on Guinsoo’s Rageblade pieces, iBoy’s Twitch was well-equipped to win a fight with his Runaan’s Hurricane and BF Sword. Item disparities, however, do not stop AHQ from setting up a flank with Sejuani. Just as iBoy unleashes onto AHQ’s bot lane, AHQ Mountain dashes out of the lane bush to smother Twitch. iBoy seemingly predicts the Glacial Prison before Mountain even considers casting it. While EDG was already ahead in this game, this moment made coming back nearly impossible. Notice that in the set-up for this play, EDG pings a “?” on the bush where they think Sejuani could be hiding.

Immortals’ ill-fated attempt to 5v5 tower dive is easily thwarted by Fnatic’s team comp, since every Fnatic pick is good against getting dove. Immortals is forced into a 3v4 “every man for himself” disengage. At no point do Immortals have a chance to turn this fight in their favor, but Xmithie and Cody Sun still have the tools to minimize their losses and attempt an escape. That is, until Cody Sun suicides and insecs enemy Cassiopeia straight at his last remaining teammate. Fnatic decides they can win the game in the resulting push through botlane, and Jesiz posthumously lands the killing blow on the Nexus just as Fnatic gets aced. Previously 0-4, Fnatic earns their first win of the group stage.

At 1-4 and with their backs against the wall, this was a crucial game for Fnatic: if they losT, they’d be going home. If they won, they pray that Immortals loses to Longzhu to force their tiebreaker game. While sOAZ’s three-man Rupture onto Gigabyte Marines hardly showcases any mechanical prowess, this moment was the turning point for Fnatic’s group stage. The camp came through for Soaz, who went huge this game. Archie was practically useless playing a terrible champion like Urgot (immobile bruisers are useless playing from behind), and Jesiz was able to bank his first-blood gold towards the game’s first Ardent Censer, letting Rekkles deal absurd damage sooner than the enemy ADC.

In what may have been a pick and ban oversight, C9 allowed EDG to have the Jarvan IV/Galio combo. What makes this combination so effective is that Jarvan can Cataclysm (R) his target while Galio Hero’s Entrances (R) onto Jarvan. Galio grants Jarvan damage reduction to survive his engage, and Cataclysm locks enemies in place long enough for Hero’s Entrance to knock-up the opponent. Turns out EDG didn’t need the wombo combo to win, but the synergy between these two champions was still integral in their win.

C9 made a great start to this game by making small plays to earn minute advantages, but EDG had bigger plans than buff control. With few exceptions, this was the theme for NA at Worlds: farm, scale up for teamfights, but don’t dare attempt to make game-winning plays. EDG cracked this game wide open with a tower dive onto Sneaky and Smoothie to earn both first blood and first tower. Notice the Janna get disintegrated–she doesn’t even have a chance to use her summoners. Also notice the extremely late TP from Impact, who was probably holding onto his summoner to try to maintain his lane advantage. 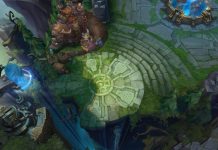