I already hate most fan merch, but how do I separate the truly “bad” from just “stuff I don’t like?” After searching for every type of knick-knack and article of clothing, I discovered that half of all bad League of Legends merch is Teemo merch, and the other half is bad t-shirts. There’s a wide variety of bad LoL-oriented graphic tees out there, and many of them are haphazardly designed and, to be honest, socially inappropriate. As for Teemo merch, there is a surprising quantity of Teemo footwear out there. This is the weirdest and worst League of Legends merchandise you can find on the internet.

Let’s face it. Teemo is League’s mascot. My favorite champion to stomp in solo queue is Teemo, so I take additional satisfaction out of dismantling all Teemo-related merchandise. 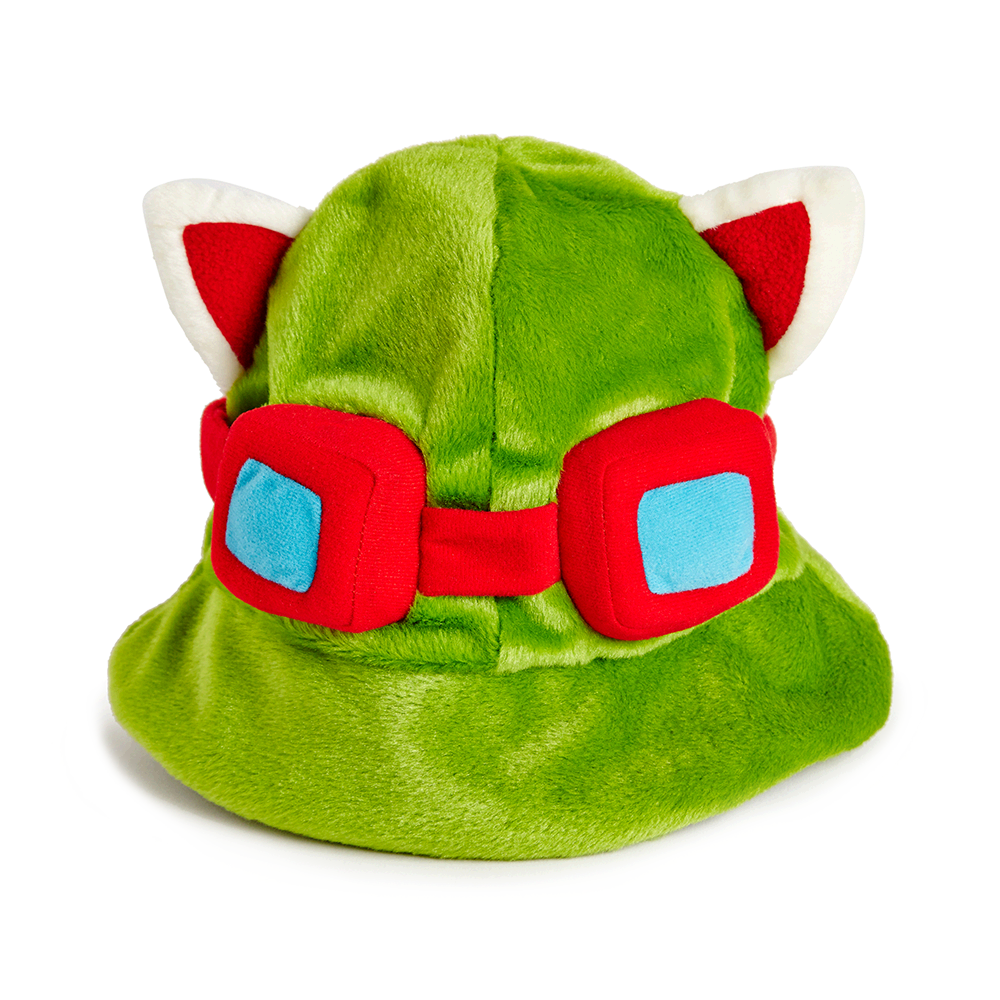 Much like Teemo’s passive, this Riot Official™ hat will make you invisible to females. Everyone has the right to make bad/ironic fashion decisions, but if you choose to wear this hat in public, you are choosing to be ridiculed by strangers. I would either give this hat to a little kid as a gift, or an adult that I hate. 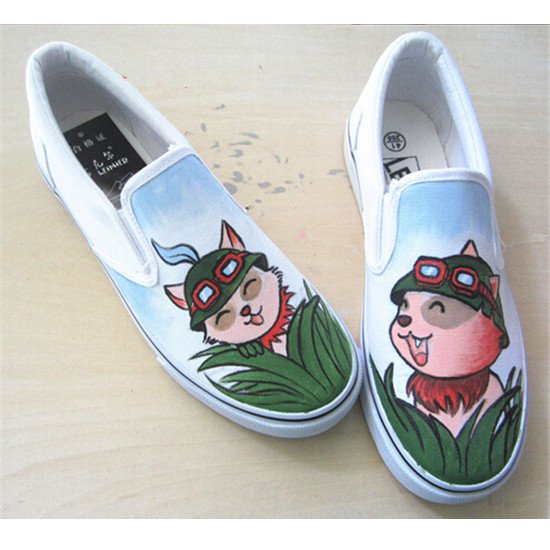 This paint-by-numbers art is inconsistent and sloppy. See the paint that escaped the lines? Left Teemo looks like it was traced from an official graphic, but right Teemo looks improvised, red, and bloated. Why is his mouth open like that? Has anyone ever seen Teemo’s mouth so wide open before? And why does he only have one tooth? This artist’s interpretation of perspective is also a little suspect–with the eye-spot turned towards the viewer, it looks much larger than the other eye. 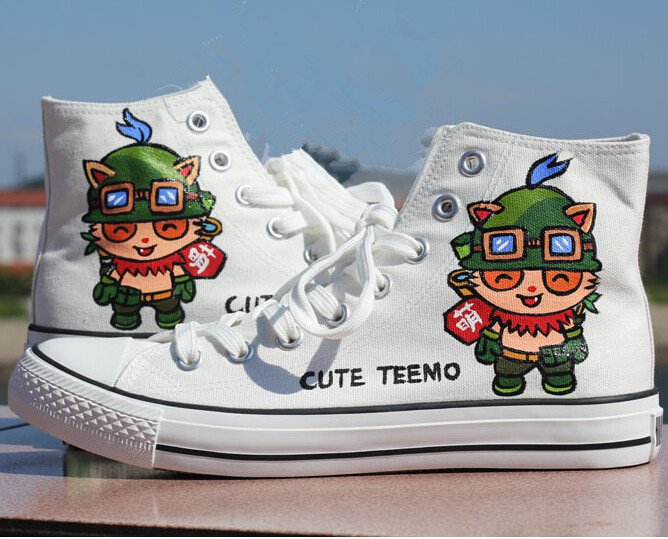 These shoes more tastefully incorporates the Teemo graphic by utilizing the side, rather than the top of the shoe. The art is better. It’s bright, vivid, and the details are more accurate. Compared to the slip-ons, it also looks like a higher quality shoe featuring a canvas upper, metal eyelets, and even a toe cap! But who am I shitting? There’s no way I’d wear these shoes, at least not if I wanted to enjoy the company of another human again. Granted, as a late-20’s man, I’m probably not target audience for this product. And call me a nitpicker, but I don’t like that the stitching interferes with Teemo’s ear. The artwork is a little crowded. This is the nicest product in the entire article, so go out and buy it now. 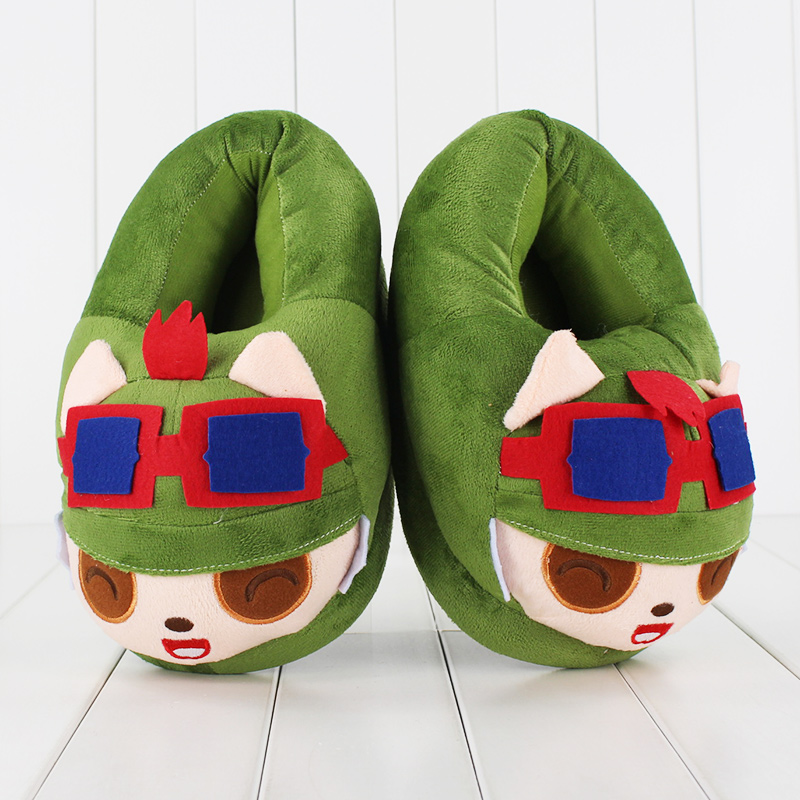 Teemo deconstructed. If Teemo was an emoji, this is the form he would take. I wouldn’t wear these outside of the house under any conditions, but that’s only because I rarely ever leave my house. Thankfully, these slippers were designed to be worn indoors only. 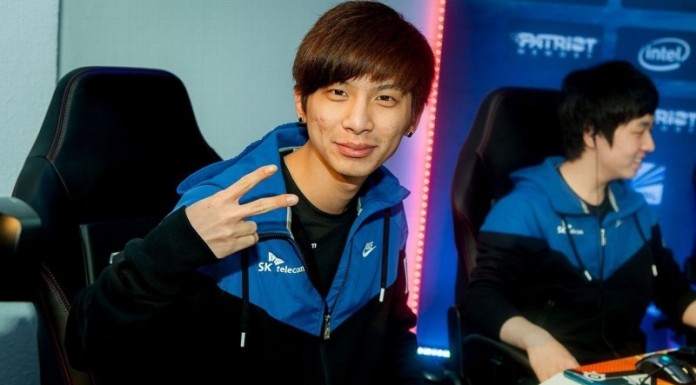 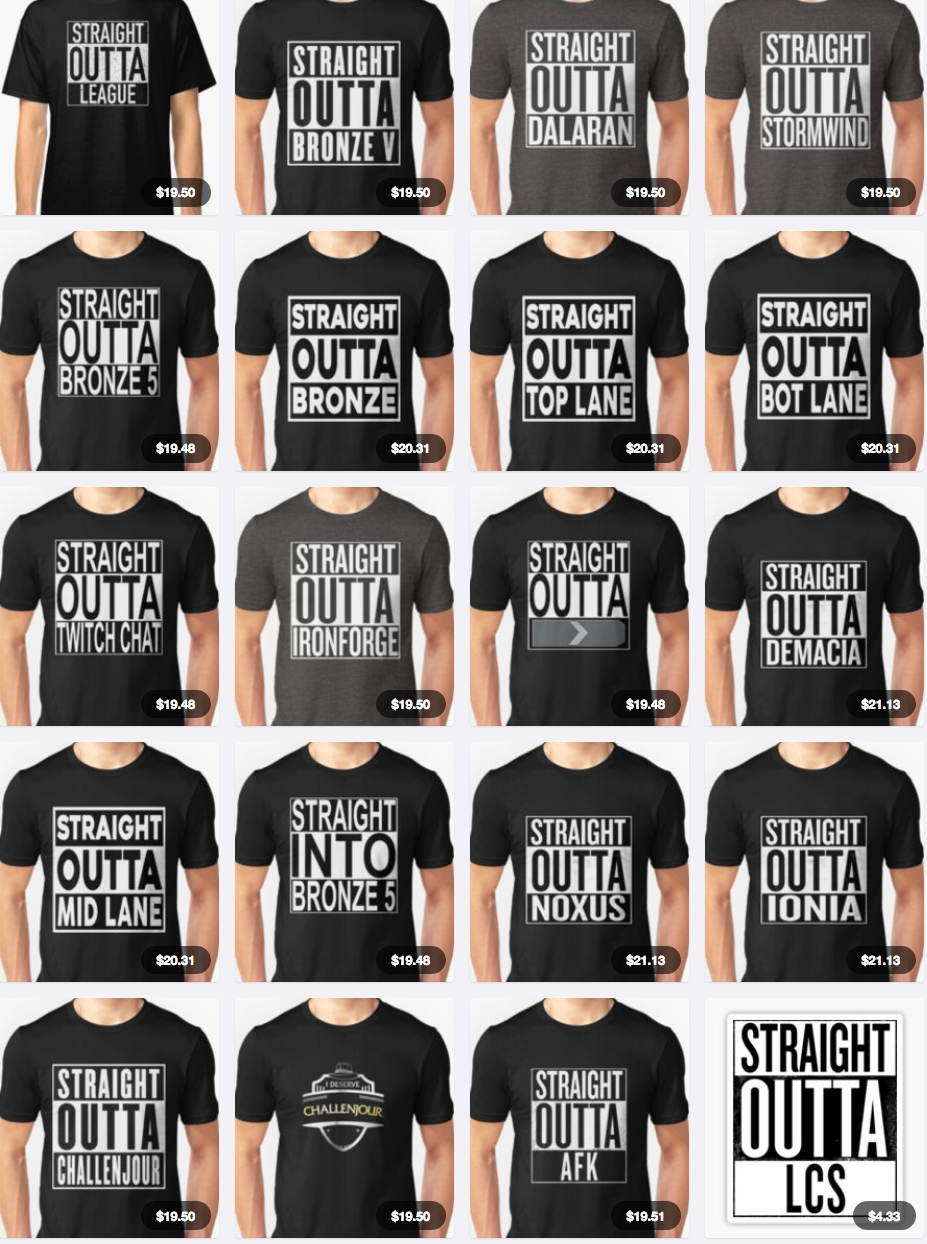 I get it. The NWA movie introduced a whole new generation of white suburban youth to NWA, and now we have to suffer infinite variations of the STRAIGHT OUTTA COMPTON stylization on everything. Straight Outta Challenjour doesn’t even make sense for this “meme” because it’s one too many syllables. Mid laners, top laners, bronze players, and even WoW players are targeted buyers for these products. This is what low-effort consumer micro-targeting looks like. 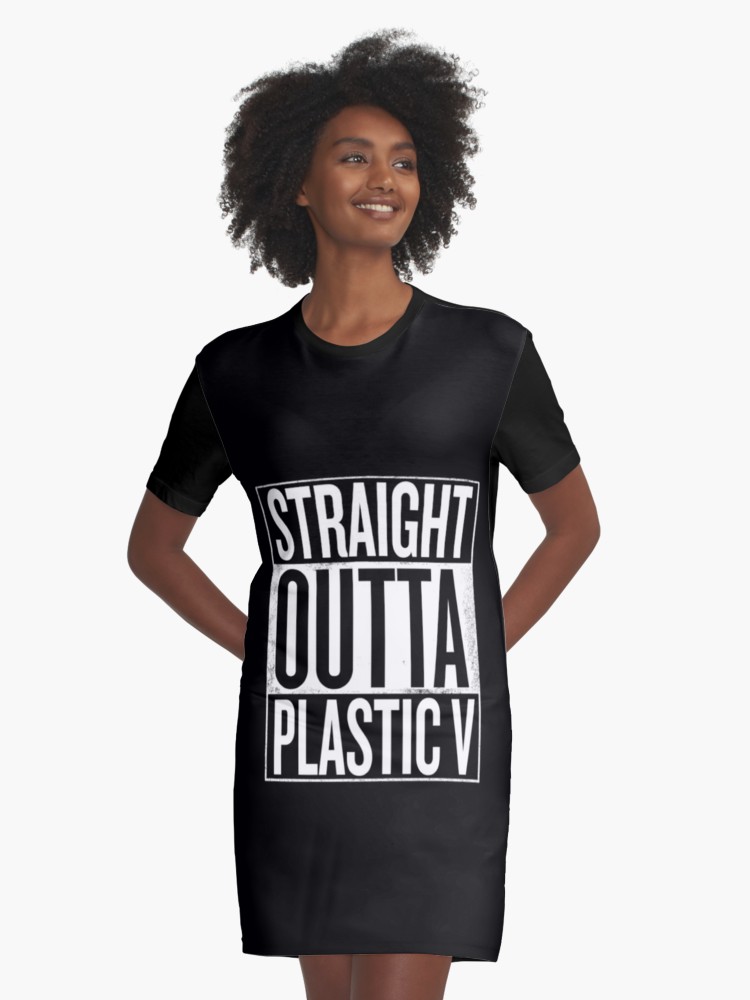 Also available in t-shirt dress form, because why the hell not? 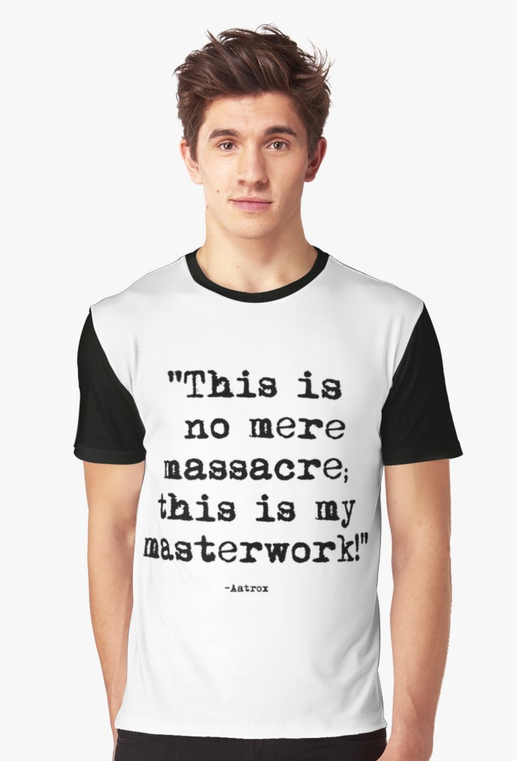 Nothing screams “socially well-adjusted” like sporting violent quotes from video game characters on your chest. I’d leave this shirt at home if I was still in school or traveling through airport security. 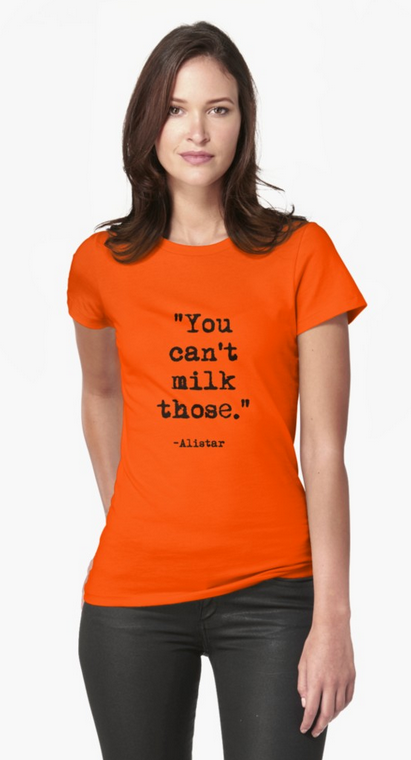 It’s funny when Alistar spams “you can’t milk those” in solo queue, but you can’t just go around quoting video game characters when interacting with strangers in society. I also feel that the way Alistar delivers his line is more more exclamatory than declarative, so the punctuation is wrong. What’s great about RedBubble is that you can order the graphic design of your choosing in a wide variety of men’s and women’s styles and colors, so if you want to make a purchase you’ll regret, the site doesn’t limit you. The designer puts up their work, and you can slap it on almost anything. Which means, thankfully, that there’s a chance this particular design only exists digitally, just like my critique of it. 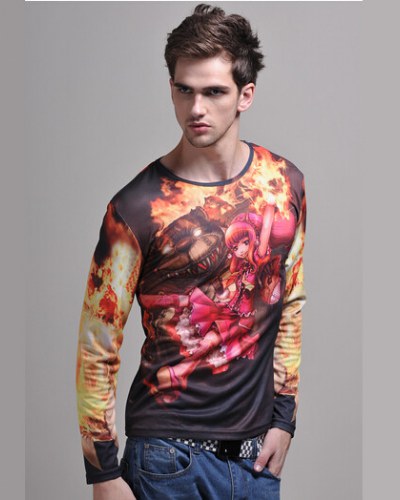 Putting aside our differences on what may or may not be tasteful use of “flame aesthetic,” there’s still one creepy thing about this shirt, and it’s the little girl featured prominently in the artwork. Adult men should, in general, be careful about flaunting images of little girls. Sure, Annie is an iconic League character and this is innocent, but if you notice moms are hiding their daughters from you, it might just be your taste in lolicon.

Another broad category of bad League of Legends merchandise are poorly laid out t-shirts. These are two of the worst I found. 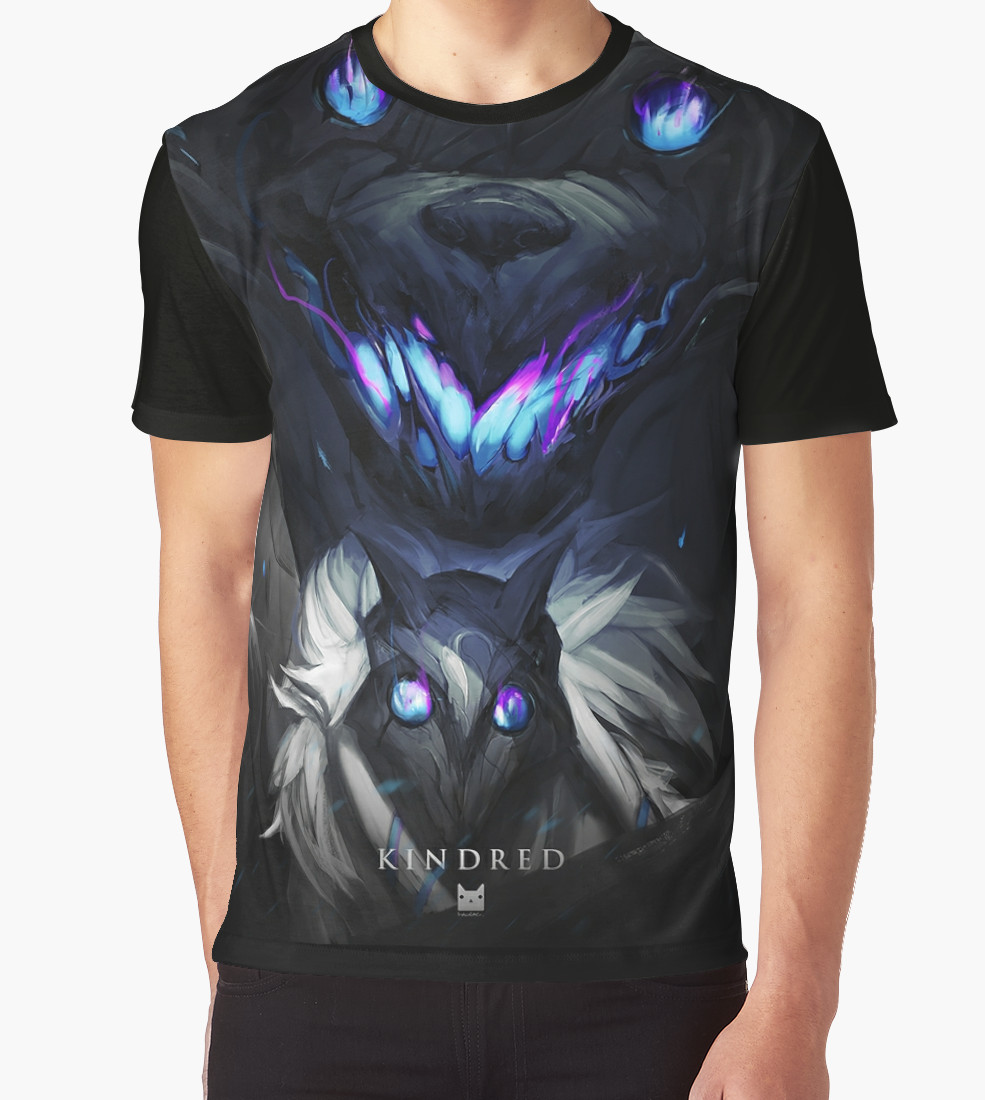 I wanted to like this shirt. The color scheme is great, but the layout of the shirt is haphazard. The eyes around the shoulders gives me an uncanny Polyphemus Moth vibe, but more importantly, the text along the bottom of the shirt is way too low and directs unnecessary focus towards the wearer’s crotch. I’m torn between looking at the glowing blue orbs and the small text right above the model’s crotch. 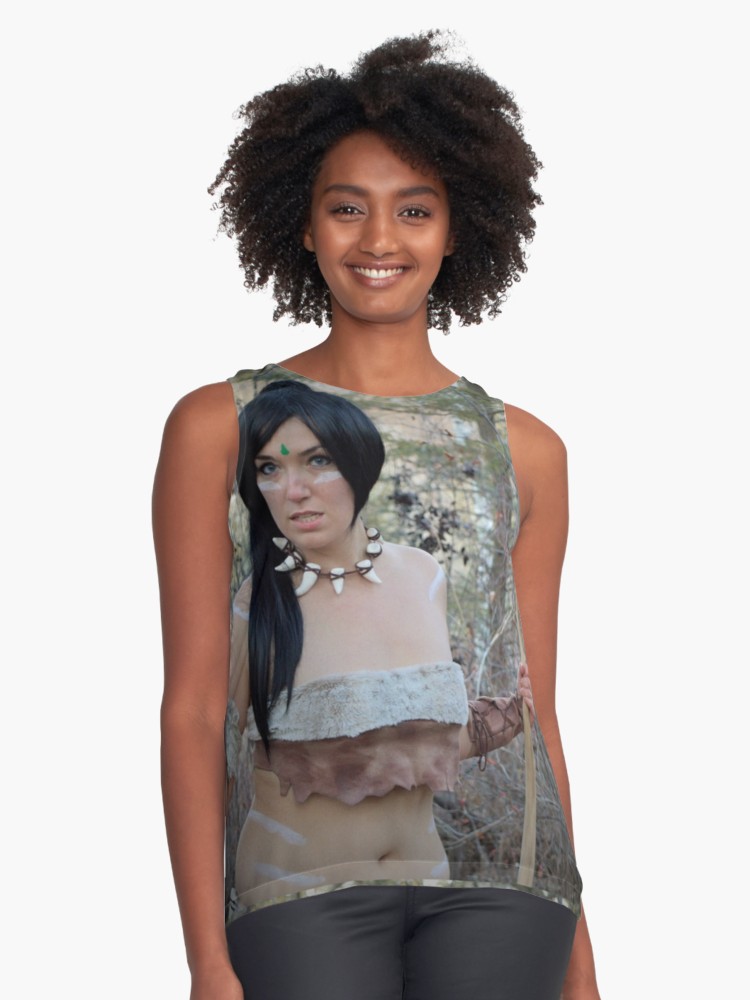 This is truly the worst piece of LoL merch on the internet. First of all, the source image is too ordinary to belong on a shirt. The subject is poorly lit, and the background foliage is too busy, distracting the viewer from the subject of the photograph, the Nidalee. Additionally, the cosplayer is awkwardly offset on the shirt – not quite in the middle, not quite on the side. Rule of thirds be damned! Of course, none of this even begins to explain why a near life-size photograph of a woman in a costume belongs on a shirt, but this could be another case of RedBubble peddling products that should have never existed in the first place. Or maybe the world just isn’t ready for this kind of fashion yet. 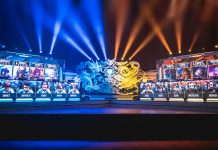