General Stephen Draper -
-6.8k
Path of Exile Shaping Before you start shaping your Path of Exile Atlas, we suggest you read our introduction to the Atlas. Once you have...
Samsung Galaxy vs. SK Telecom T1 at the 2016 World Championship Finals in Los Angeles, California. (Photo via Riot Games on Flickr.)

If you follow esports or competitive gaming, you have probably heard of League of Legends. The 2017 World Championships kicked off last Saturday (9/23), and the event runs for 43 days — that means that now is the perfect time to check out League. If you’re completely baffled by what goes on in this game, consider this article to be a starting place for you.

League of Legends is a five versus five multiplayer online battle arena, or MOBA. The primary objective in League of Legends is to destroy the enemy team’s Nexus. Just like the king in chess, the Nexus is the ultimate objective, and it’s located in each team’s base. During the course of the game, however, teams fight over many other objectives before the Nexus, including dragons, towers, and minions.

Each player only controls one unit: their champion. Champions are the main characters in League, and each champion has four spells including an ultimate ability and a “passive” ability that is always active. The player makes all the decisions for their champion, such as where to stand on the map and how to use their spells most effectively. Like in most sports, League players have a position, or role that they practice. The five positions are: Top, Jungle, Mid, ADC (attack-damage carry), and Support. If you want to learn more about the five roles, check out this short video.

You can’t have League of Legends without the minions. Minions are computer controlled units that spawn every 30 seconds from each team’s respective Nexus. The minions walk down each of three lanes: top, middle, and bottom lane. Each team’s minions will keep walking until they meet and fight the enemy minions somewhere near the middle of each lane. Enemy minions are worth experience and gold, but the players can only collect the gold if they “last hit” the minions. You need gold to buy items, and in order to last hit minions, players must compete against their own (friendly) minions to land the killing blow on enemy minions. The necessity to last hit minions drives much of the early game strategy, so you will see players prioritize “farming” minions over doing almost anything else. This stage of the game is called “the laning phase.”

The transition from the early game laning phase to the middle game is marked by the fall of towers and focus on larger objectives. Towers (or turrets) are very important structures that provide vision and defense from enemy minions and champions. Without vision, teams are more vulnerable to attacks from the jungler, who will emerge from the fog of war to gank defenseless enemies. In the middle and late game, players have to juggle their attention between farming minions and grouping up with their team to fight over the Dragon and Baron Nashor. Defeating these monsters provide buffs (powerups) to help the team  end the game sooner. 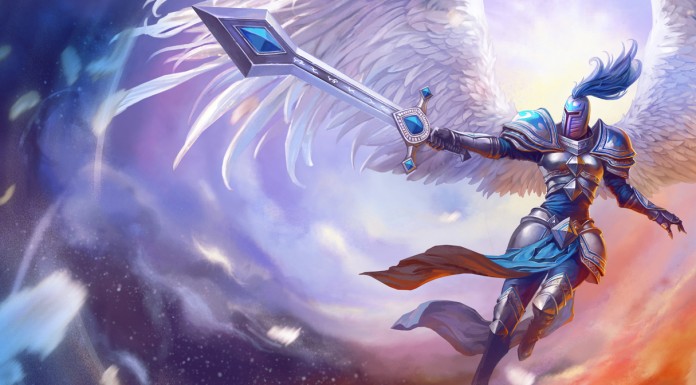 How to Watch & Read the HUD

When you watch a League of Legends game, there can be a lot of information to take in from the HUD, or heads-up display. Let’s take a look at the three main parts of the HUD: the top, sides, and bottom.

The top of the HUD is symmetrical, so try reading it from the center outwards. Taking note of the number of kills and game time helps give an idea of how much action has taken place in a game. Here, we see that 6 kills have taken place in ~20 minutes, which is not an unusual number. You might see a game where there are no kills in 20 minutes, but you could also see a game with 20 kills in 20 minutes. The best way to determine which team is currently winning is to look at the gold values. In the screenshot above, Team Immortals (IMT) has a modest 1.3k gold lead over Team Solo Mid (TSM). Immortal’s 1.3k gold lead gives them a small advantage, but this game is still close for both teams. Note: the players cannot actually see the other team’s gold in-game – this stat is only for the spectators to enjoy. 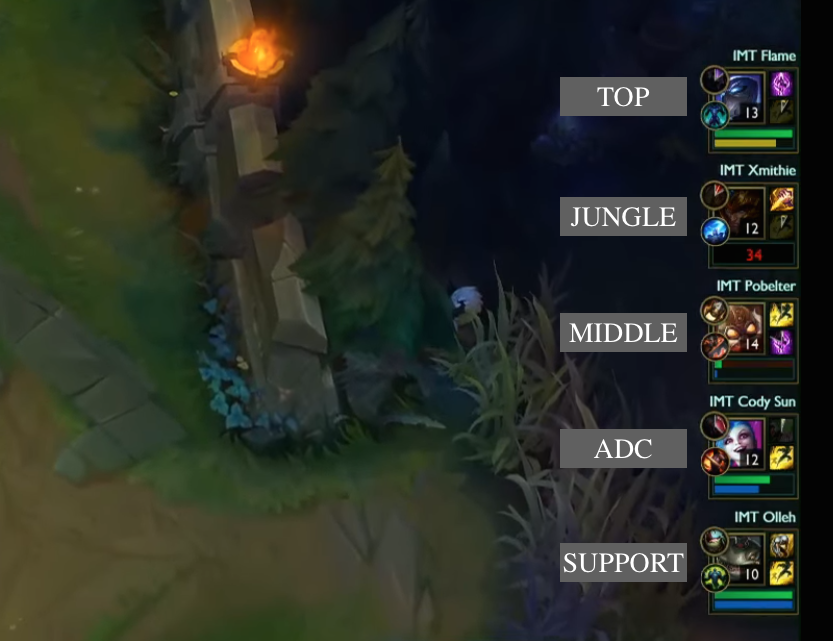 This screenshot is from the right side of the HUD. The positions are always arranged in the same order beginning with Top through Support. Each champion profile shows basic information about that champion, such as their cooldowns (the time remaining until they can cast their spells again), current health (green bar) and mana (blue bar, and, if they’ve died recently, how long they have to wait until their champion respawns. In this case, we see that Xmithie will be staring at a gray screen for 34 more seconds. He is unable to play or control his champion until he respawns.

From left to right:
Current Selection: In this moment, the cameraman has selected Tristana so the spectators can see the cooldowns of all her spells.

Champion Scoreboard: The champion scoreboard shows each champion’s items, number of kills/deaths/assists, and creepscore (minion count). Notice that the jungler and support have the lowest creepscores in the game. The junglers do not typically farm minions because they are busy farming neutral monsters in the jungle, and there are simply fewer possible monsters to kill. Supports only farm minions when it’s convenient for the team to do so. With two positions not taking part in minion farming, that leaves the three remaining positions to collect minion farm from each of three lanes.

Mini-Map: The mini-map shows where all 10 players are on the map, as well as areas of “fog of war,” where neither team has vision on the terrain. Towers and minions give vision to the teams that control them.

You’re Ready to Check out a Stream!

While League is a complicated game, Riot Games’ commentators do a great job hyping up the big moments in a game and making the stream approachable for all audiences. Once you become more familiar with the different champions and their abilities, the game will get easier to follow. Check out the World Championships schedule on the official LoL esports site! 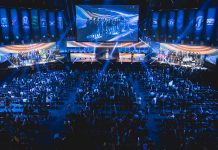