General Stephen Draper -
-6.8k
Path of Exile Shaping Before you start shaping your Path of Exile Atlas, we suggest you read our introduction to the Atlas. Once you have...
from DigitalChaos.gg

I wanted to give this article a corny name like “Digital Chaos: The Little Team that Could” but honestly DC doesn’t deserve to be pandered to. DC features Team Empire veteran Resolut1on at position 1, w33, formerly of Secret, and MiSeRy, a player who has attended every single TI. They certainly aren’t lacking in experience.

DC nearly disbanded in the wake of the March roster shuffles, but they were able to cobble together the current roster and it’s working out pretty well.

In Manila, they may have tied with Complexity for 9th-12th place, but they won over many fans. Amidst the fallout over Evil Geniuses constant roster changes and subsequent poor performances, tier 2 NA teams like DC have had a chance to break out into the spotlight. I mean, 9th-12th place is higher than EG’s 13th-16th.

Resolut1on brings up a number of interesting points in this interview from the Manila Major. One soundbite sticks out in particular: “It’s kind of better when no one believes in you and you don’t feel pressure to do well in the tournament.” That’s a different perspective than the typical ‘sports’ line: “My fans believed in us and that helped us win.”

‘w33voker’ is pretty legendary. MiSeRy got a lot of flak during his time in Secret, but he’s proven to be a flexible player who can fill multiple roles. I’m afraid I don’t know a ton about Saksa and Moo (love the hair though) but they are meshing well with the team and starting to see results.

Digital Chaos managed to take a game off Newbee.

It’s hard not to like the organization, too. Digital Chaos was founded by Shannon “SUNSfan” Scotten, a long time Dota caster/personality and managed by Nikki “Sajedene” Elise. SUNSfan is known for the Captains’ Draft tournament and other fun content.

The players on DC seem pretty happy – it’s one of those smaller “homegrown” organizations that really seems to do right by them.

You can check out Digital Chaos’ website here, and watch them in action again in a couple of weeks – they aren’t attending ESL One Frankfurt. BRB, ordering a DC shirt. 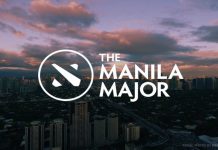