Dota 2 Eugene Torubalko -
-441
What to Expect for the Spring 2021 Dota Plus Update Dota Plus is a premium monthly subscription service in Dota 2. It comes with many...
Via playoverwatch.com

Every now and again you’ll have one of those dream games where somebody in your team just steps up and takes charge. They’re focused, they’re calm, and they know exactly what they’re doing. They’re the sort of player we all wish we were, the player every now and again we manage to emulate, and when they’re on your team everything just seems to go smoothly. For the first time in ages your team mates are coordinating their attacks instead of running around the map aimlessly and you suddenly feel like you’re playing a totally different game – a game in which someone has your back and heroes are able to string their abilities together in a glorious symphony of destructive power. Sometimes you’ll find these players on a tank hero like Zarya, issuing orders as they lead from the front, other times they’ll be pulling the strings from behind the scenes on a Widowmaker, but every time you’ll be left feeling like a god has just walked amongst mere mortals.

Previous articleSurefour and Taimou Hit with Aimbot Allegations
Next articleOverwatch: The End of the Beta Era 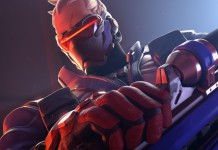