League of Legends Stephen Draper -
-416
Nexus Blitz has been a mode showcased several times now within League of Legends. It’s entirely different from the main game, and in it's...
Via eu.battle.net

Troll your opponents with a team of gorillas or lure them into deadly death traps: with the open beta kicking off in the first week of May, it’s time to take a look at the most entertaining strategies in Overwatch for you to try out. Whether you’re playing with friends and looking for a specialized six-man line-up or you’re in solo queue and want to mix things up a bit, there’s plenty of hilarious ways you can liven up a game. Whilst many of these strategies wouldn’t be appropriate for a high level competitive match, you’d be surprised by how effective they can be – we have seen some professional teams resorting to cheesy strategies in the past and we’re sure to see it happen again.

Who doesn’t enjoy setting up turrets and then sitting back and watching them mow down your opponents as they struggle to mount an offensive push? A great defensive tactic in Point Capture matches especially, if you pick up a Torbjörn and a Bastion on your side you’ll be in a prime position to make the enemy heroes suffer every time they get close. Torbjörn’s fun-sized little machine of death is upgradable and repairable and hits ridiculously hard once it’s leveled up. If you find a secure location for it near a choke point then it can be near impossible to destroy.  Bastion, on the other hand, is an actual walking sentry turret and capable of dishing out immense amounts of damage when he’s in his Ultimate mode, Configuration: Tank, which lets him fire off area-of-effect cannonballs at long range. He does require a bit of protection from his team but with a shield or two and some clever positioning he’ll feel like a mechanical god.

Step one, pick Symmetra. Step two, deck out a room with Sentry Turrets. Steps three, lure the enemy team into the room. Step four, watch the massacre unfold. Okay, it might be harder than it sounds and not everyone is going to be foolish enough to chase you into a death trap but it’s amazing how many players will risk everything to kill off a vulnerable Symmetra. Only the most tankiest of heroes in the game will be able to walk through a room full of the little laser turrets intact yet not without taking some heavy damage, but most will be burnt to a crisp within a few seconds. The best part is that you’ll be able to stand back, firing off the odd shot and trying to contain your sadistic laughter as the enemy heroes are zapped to death. Around important locations on the map this can actually be game winning so don’t underestimate the power of those pesky little laser turrets.

One of the most entertaining strategies you can run is to just all pick the same hero and run at the other team head on with your team of clones. Gorilla warfare with a side of Winstons is definitely one of the best options, since you can jump around with your shields up making monkey noises and smashing things. Despite the game telling you how unbalanced your side is, “Too many of one hero” flashing up on screen, it’s not nearly as bad as you might think and if one player switches over to support if the game is close you might well be able to win. Another hilarious option is for everyone to switch over to D.Va. – everyone loves her pink mechs and they’re so mobile that you’ll be able to dart around the map picking of heroes like a squadron of hungry velociraptors, self-destructing mechs blowing up all over the place.

This is a classic tactic we’ve seen used competitively in the past and whilst it’s not quite the force it once was, if you’re playing with friends then there’s nothing more epic feeling than all grouping up behind the Great Barrier and pushing towards your objective. You might want to play Rise of the Valkyries of max volume as your side heroically strides towards the opposition, ignoring the incoming fire. Reinhardt’s energy shield can absorb huge amounts of damage before it is destroyed, so as your side approaches the objective and the shield begins to weaken, prepare for the moment it breaks when you can leap forwards looking for kills. It might work, it might be a disaster, but it’s guaranteed to be a lot of fun. 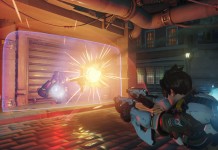