Dota 2 Craig Linscott -
-996
Silencer Here is a Hero that can silence entire stadiums of screaming fans. A fun trend that is going around in the larger LAN tournaments...
Featured image via vg247.com

Observing is often cited as the most pressing aspect of Overwatch in need of improvement. What’s the problem and what can be done to overcome it?

Although the gameplay can be compared to that of a shooter like CS:GO, following each hero’s view doesn’t seem like enough information to paint a compelling story line for the viewer.

Observers have the following tools to their disposal:

Notice how Overwatch uses all three whereas other esports generally just use two.

There are too many unique abilities that are vital to shaping the flow of the game. Missing those key events cause the drawing of that narrative to fail. That’s because you can’t show the viewer every important ult, stun or escape in a digestible way with the tools above.

The challenge at hand is for Overwatch observers to combine what’s available to create the most complete package. The most skilled will set themselves apart by the style in which they change angles in accordance with the action. The best observers will learn the craft like an art instead of an algorithm.

We have to entertain the following questions in order to formulate a satisfying answer:

People (particularly analysts) often talk about Blizzard having to face all of the observer challenge by innovating the tools that are available to developers today. But nobody ever gives examples of what this might look like or how they imagine it to be. And neither can I. So maybe the solution is more demanding than we expect.

Of course we can start with some sort of split screen. That’s a start for sure. But who are we kidding? Do we really think that it would suddenly illuminate everything? By that logic we may as well just split the screen twelve ways and follow each hero individually. We can’t possibly miss anything important by doing that, right?

I definitely disagree. And what comes in tandem with that disagreement is the desire to think of some better way of spectating a virtual game. The solution to the problem hasn’t manifested itself in my mind, but my thoughts are pointing towards VR as a solution.

I think that the spectators are limited by the unreasonably hard task of having to translate 3D interactions to their 2D viewing screen. Sometimes there’s just too much visual feedback to filter the more important visual cues from the trivial ones.

Until that point comes however, Overwatch will prove to be one of the most difficult esports to observe. Luckily, this will emphasize free market aspects that many of us enjoy. 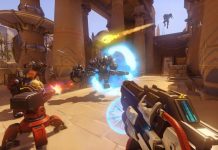