Dota 2 Craig Linscott -
-996
Silencer Here is a Hero that can silence entire stadiums of screaming fans. A fun trend that is going around in the larger LAN tournaments...
via deviantart.net

This article is the third installation of a three part series. Find Part 1 here and part 2 here.

Competitive depth can serve as a measurement for competitiveness in esports. It’s a vague concept, but concrete enough to do analytic work. Unfortunately, it doesn’t always work.

I have to admit that the view is too idealistic. Sometimes a decrease in the competitive depth of a game ends up making it a more competitive esport.

For example, Smash 4 was intentionally simplified to cater to a casual user base. Moves like wavedashing were kept out of the game to remove movement options that took time to learn. But with Smash 4’s ever growing user base and flourishing tournament scene it looks like we’re dealing with an example where simplification ultimately promoted the competitive scene.

You know how lots of esport pros talk about reaching that level where you’re no longer battling yourself or the game, but instead you’re just playing mind games with your opponents? Maybe simplification can make the game more competitive by facilitating, even promoting mind games between players.

So the case can be made that simplification makes games more competitive, which opposes the claim underlying competitive depth.

Implications: What does the counter argument mean

But if competitive depth can’t elucidate ways to induce competitiveness, then we’re just stuck back at square one.

In an article discussing Widowmaker’s most significant nerf, I claim that removing her quick scope reduces the strategic depth of the character, as it drastically simplified her move set. And with a reduction of strategic depth, Blizzard must be catering to the casual player base.

The thing is, that we all felt like it made the game simpler. But if we had to give some irrefutable reason as to why it took away from competitive Overwatch, we would have a terrible time finding an answer. After all, there’s always this gaping hole created by the players’ minds. In that sense, the medium that’s played between these two minds is almost negligible. Because when two minds can battle each other, it doesn’t matter how deep the game is. As soon as two minds start to predict each other, an infinite amount of options are created. And that’s already infinitely complex.

Unfortunately, Smash 4 looks like a good counter example to the analytical strength of competitive depth. But our intuition that difficulty and complexity makes for a more competitive game is still there. So how can we consolidate all of this?

Although it seems true that we can’t tell if one esport is more complex than another, because they are both infinitely complex, the concept still serves to underline a way to analyze a game’s nuanced potential to make a good esport.

Maybe you have a better counter example to relate? 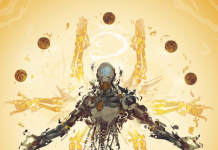