General Stephen Draper -
-6.8k
Path of Exile Shaping Before you start shaping your Path of Exile Atlas, we suggest you read our introduction to the Atlas. Once you have...
(Featured image via Getty Images.)

With the world of esports continually growing and expanding, Valve has stepped up their game and introduced new ways for players and fans to experience Dota 2. In July 2017, they released the Dota 2 VR Hub. This new addition allows you to watch games with up to 15 people, as well as live matches, streams, and replays.

How can you access this totally immersive Dota 2 experience? All you need is a Steam VR capable headset, tracked controllers, and a non-potato computer.

I wasn’t sure what to expect with Dota 2 in virtual reality. When you first enter the game, instead of standing on the battlefield or viewing as some kind of soaring top-down observer, you’re actually in a room with the heroes in play, the map, and a stream of the in-game action. It’s more like a “situation room” simulator rather than an actual battlefield simulator. Instead of having to switch between the net worth graphs and last hit information in the UI, this information is presented to you in this “room.”

You have the option to teleport to any place on the battlefield using the controller. Once there, you have two options for watching the game. You can either “grow” to become a titan and look down on the action, or you can watch from a normal hero-sized perspective, and walk around the space. Viewing from this angle can be chaotic, but it’s definitely an immersive way to experience Dota.

Should Valve deem it worthy of development, it might be interesting to see Dota played in VR. It could make a good show-match at an event, or be used for a reveal during The International. I doubt we’d see it reach competitive status though. For example, Super Smash Bros. Melee and Brawl tournaments are still played on CRT televisions like the game was originally intended, in order to reduce input lag. Given that stuff breaks in Dota every time a major patch is released, I can’t imagine Valve has the development staff right now to keep regular Dota running, and patch issues with the VR component.

With Artifact on the horizon, Valve has a chance to really capitalize on virtual reality. It would be novel to have a game board in front of you in VR and be able to see the cards laid out, pick them up, and have other relevant information floating around in the rest of the cyber space. If they can beat Blizzard to the punch with VR for a card game, it would help cement Artifact’s place in a market that is heavily dominated by Hearthstone.

For now, Virtual Reality headsets are affordable to a small percentage of Dota’s fan base. Part of the allure of Dota is that it’s free-to-play, which is why it’s popular with teenagers in Peru, as well as other places around the world. All you need is access to a cyber café, a mid-end pc, or a laptop to enjoy playing it. On the other hand, VR headsets cost hundreds of dollars. I can’t see Dota 2 VR taking off for a while yet, at least not until virtual reality cafés start popping up.

Previous articleWhat’s next for Ohaiyo after Fnatic?
Next articleThe Ugliest Dota 2 Cosmetics Ever Made 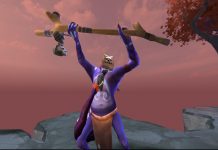