Yorick, Shepard of Souls, remains an underrated solo queue top laner in League of Legends, but if you haven’t tried him in a while, now might be the best time to give this champion a shot. He’s still dependent on his “ghouls,” although they’re called Mist Walkers these days. Everything else about his kit is completely different. If you’re unfamiliar with Yorick, it might be worth it to check out Riot’s official champion spotlight or his LoL Wiki before continuing.

Yorick: How to Escape Bronze and Silver

Yorick is “underrated” because he’s unpopular but has a high win rate. According to OP.GG, Yorick enjoyed a fairly elite 51.28% winrate over the past month, the 11th highest in the game overall. In fact, Yorick is the highest win rate champion in Bronze and the ninth highest in Silver. With these impressive figures in mind, what is it that makes Yorick unpopular? His 2.8% pick rate, which makes him 109th place out of 134 champions.

Yorick’s unpopularity can be his gift and his curse: opponents will play foolishly against him, but your teammates are equally unfamiliar with Yorick’s strengths and power spikes.

•  Yorick is a commanding split pusher with just a Triforce, but he’s versatile enough to siege or teamfight once he becomes tanky.

• He’s got some of the highest base & growth stats in the game. His Last Rights [Q] heal and Mist Walker pets have per-level scaling, ensuring late-game dominance.

• Has a pretty safe lane phase if he doesn’t push lane. His Q provides a lot of sustain.

• He deals respectable mixed damage to tanks with the %HP damage granted by Maiden of the Mists [R].

• He has no mobility, and is weak against mobile champions who can escape his Dark Procession [W]

• Has a tendency to push lane, which can lead to him getting ganked a lot

• Maiden of the Mists [R] has terrible AI, and she will suicide uncontrollably into towers

• Is weak against burst damage. Yorick needs time to deal damage in fights

Mist Walkers are relentless lane pushers, so the key to playing Yorick correctly is to manage your passive so that you only raise your Mist Walkers when you need them. In the case of a neutral wave position (where two fresh minion wave meet each other), you have to be careful about releasing your graves and pushing the lane without vision.

Sometimes I see if I can mark an enemy champion with my Mourning Mist [E] before releasing my graves. If I can land the skillshot, it’s worthwhile to go ahead and release the Mist Walkers so they can attack. Otherwise, you shouldn’t push the lane unnecessarily.

• Always build Trinity Force first. Your Q synergizes perfectly with Triforce. Similar to Nasus, Sheen is an important power spike for Yorick. You don’t need any damage after Triforce – just focus on getting tanky so you can stay in fights for longer.

• Zz’Rot Portal is more useful earlier in the game when there are still towers left to take, so I try to build this item second if I build it at all. Yorick’s Point Runner passive helps him siege and fight near towers.

• When I’m monstrous, I use Deadman’s Plate and Point Runner to zoom around the map, pressuring objectives and tower diving at will. These items provide Yorick with some much needed mobility. More conservative builds eschew Zz’Rot and Deadman’s for Randuin’s Omen and Spirit Visage, which provide more raw tankiness.

Get 10% CDR from your glyphs if you can afford to sacrifice magic resist. I also like to have attack damage marks and quints, which makes Yorick’s Q hit like a truck – as much as 130 damage level one! Attack speed isn’t necessary; you will get a lot of attack speed from your Triforce. As for seals: armor will make your early game healing more effective, but scaling HP seals provide the most benefit and complement your scaling better. Feel free to experiment with your runes. I think there are plenty of other valid options.

As for masteries, you’re better off sticking with Grasp of the Undying. It’s perfect for a juggernaut like Yorick.

Eulogy of the Isle/Maiden of the Mists [R]

Yorick’s Ultimate Pet, Maiden of the Mists, is the whole reason you should lock-in this champion. She’s extremely tanky, and spawns alongside her 2/3/4 Mist Walkers. Maiden can be used to split push a lane all by herself, or you can use her to teamfight or take Baron.

It’s may be alluring to drop Maiden in a side lane and group up with your team while she “split pushes,” but I much prefer to save this spell for a teamfight. Yorick just isn’t scary without his ultimate, and you will lose teamfights while your Maiden off galavanting in a side-lane.

This isn’t the definitive Yorick champion guide, but it’s a good place to get started. Yorick has an odd playstyle, and I can’t possibly describe all of the ways to utilize him effectively in one article. But if you’re looking for a new champion to carry top lane with, consider picking up Yorick. You won’t regret it.

If you want to theorycraft item builds, talk general game theory, or even flame me for picking Yorick, hit me up on Twitter at j_d_schmidt.

Previous articleLeague of Legends: How to Use Smart Pings to Win Games
Next articleCop Joins Team Dignitas as Head Coach 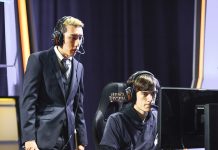