General Stephen Draper -
-6.8k
Path of Exile Shaping Before you start shaping your Path of Exile Atlas, we suggest you read our introduction to the Atlas. Once you have...
Feature image via Riot Games.

The ailing Team Dignitas has made a change to their LCS lineup, recruiting David “Cop” Roberson as their new head coach, the organization announced Friday.

A change of any kind comes as little surprise, as Dignitas rank currently sit towards the bottom of the North American League of Legends Championship Series standings with a 2-6 record. However, their underwhelming start to the season was surprising, especially considering the presence of Korean standouts Kim “Ssumday” Chan-ho and Lee “Chaser” Sang-hyun.

I'll be on stage as Head Coach today for @TeamDignitas – super excited to be back in the LCS! We play @FlyQuestSports at 3 PM pst nice!!!!

The acquisition of Cop, per the press release, was made “with the goal of increasing communication and cohesiveness,” an issue that seems to be common among mixed-language lineups in North America.

Dignitas are betting on Cop’s familiarity with Jang “Keane” Lae-young, with whom he played and coached on Curse Academy, Gravity, and later Apex, as well as Alex “Xpecial” Chu, his lane buddy for in 2014, to help get the team on the same page.

Cop, who had a lengthy career as the AD carry for Team Curse, led Gravity to a playoff appearance in his inaugural split as head coach in 2015. He stayed with the LCS slot and became Echo Fox’s skipper the following year, but was dismissed during their bumpy Summer Split before finishing the season as an analyst for Apex.

Dignitas (2-6) and their new head coach will make their NA LCS debut together tonight as they take on FlyQueist (6-2). 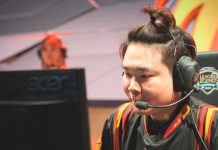