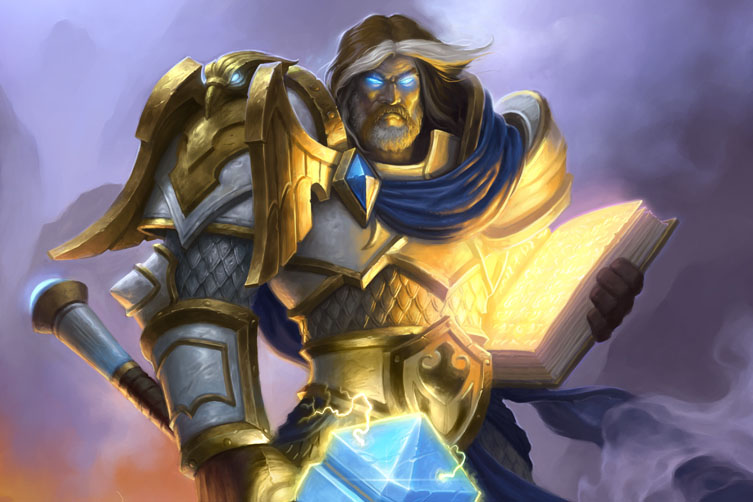 Introduction
This deck emerged with LoE and the release of the core card in this deck, Anyfin Can Happen. The first thing that many people theorycrafted was the fact that with a specific set of seven murlocs, you could deal thirty damage to your opponent the turn you played Anyfin Can Happen. It was quickly realized how unviable this scenario was, and despite the few highlight videos of it, many players dropped the deck. However, those who stuck with it have figured out other ways to do it, picking specific Murlocs to optimize output and realizing that you needed two copies of Anyfin for efficiency. Because of how much potential late game burst Anyfin has created, the entire deck is based around staying alive and putting out the initial pieces before you can create the Exodia of Murlocs, smashing your opponent for massive damage in a single turn. As long as you are able to get to late game, there are very few decks that can stand up to the massive Murloc onslaught, making this deck both fun and viable, even a bit unconventional.

This decklist has a fairly balanced amount of healing and card draw in order to both stay alive and find all the pieces you need to win as fast as possible. The goal here is to be able to drop at least one Anyfin on turn 10, with it summoning three or four murlocs. Of course, if the situation is better you may want to wait, or if it’s worse, you may not be able to drop it for other reasons, but that’s the average goal. 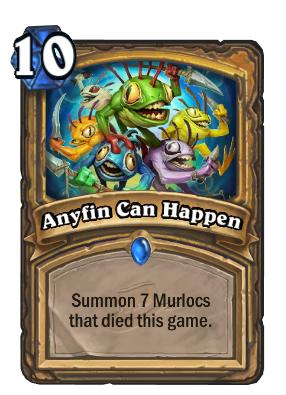 Playstyle
With the release of LoE came a card loaded with potential called Anyfin Can Happen. It is a ten mana card that brings all Murlocs who have died in the game so far back to life on your board. The goal here is to simply survive until you can kill your opponent in one or two big Murloc bursts, doing a potential of well over thirty damage between the two Anyfins, assuming you can get the pieces out beforehand. This deck is very slow before turn ten, however. You’ll want to play greedily when it comes to your removal, save the Pyromancer + Equality until you can’t hold it anymore or until it will get incredible value. You have a lot of healing and card draw, but removal is at a minimum, so be aware of what you have left in your deck. Other than that, simply keep your health up, keep drawing, and keep playing Murlocs. You will often want to simply play Murlocs even if they are just going to die, so that you can get a better Anyfin down the road. Remember, any Murlocs you summon with the first Anyfin will be counted as dying when they go, and you will summon them once again with the second one. Meaning you could potentially get two Old Murk-Eyes, or even four Bluegill Warriors. Keep track of which Murlocs have died and know how much your damage is so that you can calculate your one turn kill down the road.

Good Matchups
You are very favoured against most slow decks. As long as you can get to a point where playing both of your Anyfins, there isn’t a lot that most classes can do about it. One thing you will have to be very aware of in the Priest matchup is that if they Entomb one of your Murlocs, you will NOT get it from Anyfin unless they actually play and kill it. So don’t play any Murloc you cannot afford to lose, unless you have a strategy for killing it that turn. Also be weary of priests playing Anyfin before you can, if they are using Thoughsteal. You also have more than enough healing to deal with the average Freeze Mage, and because of how much this deck is designed to slow down face decks with board clear and healing, you even have a decent chance against them, although it is much trickier. 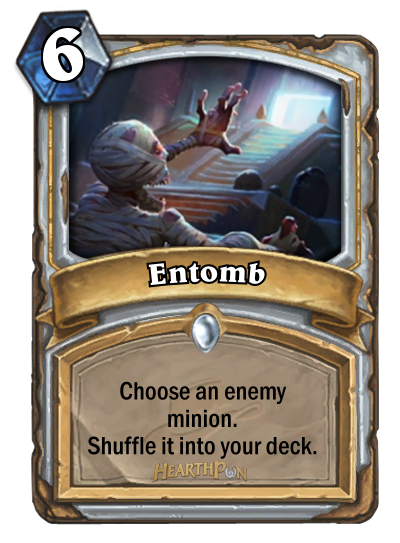 Bad Matchups
While you do have a decent chance against aggressive decks, they are much harder to beat. The worst are zoo decks or Secret Paladin, because they are so board-centric, and while you do have a decent number of board clears, you still cannot afford to wipe the board every turn. If you play a risky Doomsayer and it gets silenced, that’s pretty much game unless you get a miracle. Incredibly aggressive decks such as the new Aggro Shaman deck can also be tricky. You do run a lot of healing and board clear, but they have so much damage that if they curve out perfectly you won’t even have a chance to get to turn eight, far less play your Lay on Hands. In those matchups you’ll simply have to play aggressively yourself and hope they don’t have a perfect curve. As mentioned above, be very careful for priests as well, as Entomb can ruin your entire strategy.

Level of Overall Viability
Of all the unconventional decks, this is probably the most viable one. This list allows a potential win against practically any archetype, although some are of course favoured. There are a decent number of people who have played this deck all the way to Legend, showing just how much potential the deck has. One of the biggest things this deck has going for it is that it doesn’t rely on Emperor Thaurisan or Reno Jackson. The only card you really rely on is Anyfin Can Happen, and you have a lot of card draw and two copies to search for, meaning that by the time you can play it, you’ll have it in most cases. Consistency is important especially in unconventional decks, and that’s something this deck has.

Level of Fun
This deck can be incredibly fun and incredibly frustrating to play. If you are able to get to turn ten and get your combo off, it’s fun and satisfying to suddenly have thirty damage in a single turn. If you find yourself consistently dying before you can get that far, it’s very frustrating. This is one of the decks that you’ll have to look at the current meta before you play, as playing it could be potentially very lucrative, but it could also be frustrating and detrimental. But hey, thirty damage in one turn. That’s always fun and interactive! 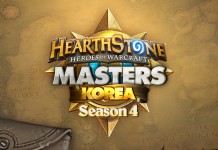