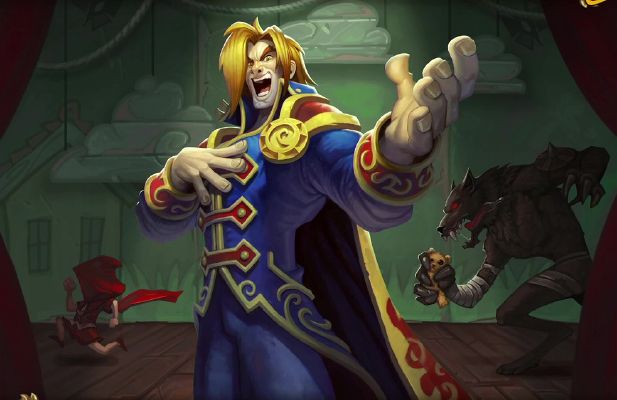 This week the second wing of One Night in Karazhan was released. With it came the second legendary, Barnes. Barnes is a very interesting card. He makes use of the 1/1 version of cards that we’ve seen a few times in the past. However, this time, it’s random. Now, I can’t talk about RNG without reiterating my hatred for it. That being said, Barnes adds a lot to potential deckbuilding. Sure it will still be RNG, but you can make the odds skewed far more in your favour. Let’s take a look at the current decks he fits in, and what new decks could emerge. 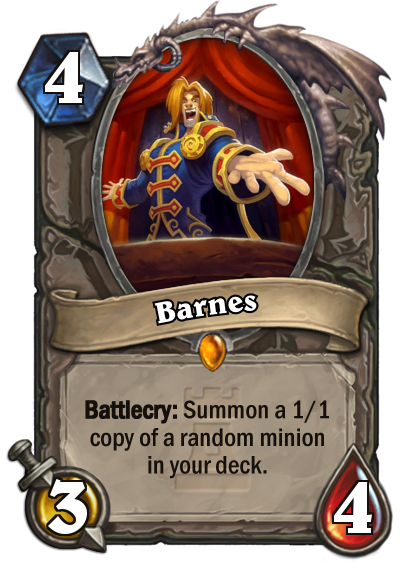 There are two decks that really stand out as obvious homes for Barnes currently. The first one is the newish Deathrattle Paladin deck. There are still some bad targets, such as Aldor Peacekeeper or Keeper of Uldaman. However, the good targets are extremely good, and plentiful. It could pull Cairne, Sylvanas, Ragnaros Lightlord, or Tirion. All of which are tier one pulls. Also, depending on your list, it could pull Corrupted Healbot or Infested Tauren. The best part here is that if it pulls any of the deathrattle cards, that gives a second copy of the card to be reanimated with N’Zoth when you play him. Imagine playing N’Zoth and getting two Cairnes!

The other deck that Barnes fits in well is spell based decks. This seems odd, but typically within spell based decks the few minions they have synergize well. For example, in Token Druid, you can pull Violet Teacher, Fandral, or Bloodmage Thalnos. There are a couple bad pulls as well, but over 50% of the minions are good targets. In Mage decks you can pull Sorcerer’s Apprentice, Flamewaker, or Ragnaros. All of them great targets that synergize without needing their bodies or battlecries.

The above decks are the best competitive decks for Barnes, but there is one that is far better. It’s not competitive, but it’s a lot of fun, and can certainly win on ladder. And it fits Barnes like a glove. That deck would be Astral Communion Druid. Current versions run a lot of cards like Ragnaros, Y’Sera, and Fandral. They also run the absolute best card for Barnes, Y’Shaarj. Someone has already posted their perfect Barnes result, seen here:

The current version of the deck runs a lot of dead pulls for Barnes, but that can easily be tweaked. Turning this into a Deathrattle deck can easily create all great targets for Barnes without losing threats. I’ve created a template deck featured below, but hopefully you’ll be able to make your own variants!

Barnes is a very all-or-nothing card. He can create a lot of useless 1/1s, but he can also create a 1/1 that makes a 10/10. The RNG behind it is grossly unfair, but the deckbuilding is fascination. It is nice to see some cards like Barnes still being printed that force players to seriously consider deckbuilding. Which is why I highly suggest you make your own Barnes decks and try them out yourself! 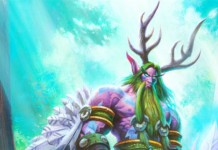