Reviews Stephen Draper -
-280
We were lucky enough to receive a Roccat Kova gaming mouse last month to review. I’ve used the mouse extensively, and have...
Featured image via Blizzard.

Beast Druid is an archetype that Blizzard has been pushing for quite a while. The last two expansions have added a lot of beast synergy within the Druid class. Now, with the new One Night in Karazhan cards, the archetype finally looks viable. For those of you who enjoy synergistic decks, this is the latest and greatest. With the Mech deck rotating out, this is the replacement, where minions help each other get stronger. It’s not a combo deck like Murloc Paladin, but rather a minion based combat deck. Overall it’s fairly straightforward, and despite some cards not being released yet, is a solid list. 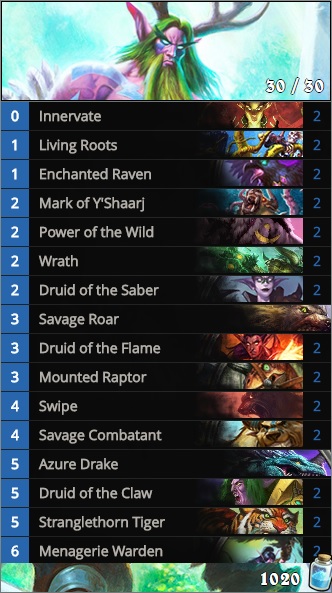 So Menagerie Warden will be released in a few weeks. I strongly suggest not playing this deck without it, as it is the card that makes the deck so strong. Other than that, there certainly is some leeway in this deck. Obviously the list isn’t refined, as it is currently unplayable. The big thing this deck is missing is cycle. In later versions I wouldn’t be surprised if there is a second Azure Drake, a Nourish or something similar. If you want to try out Druid of the Fang, feel free to do so! 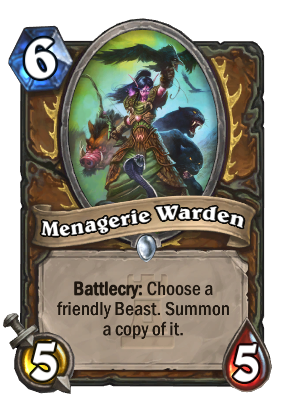 This deck is fairly simple. It’s a minion based midrange deck, meaning your best play is typically the best minion on curve. The most important card in this deck is Menagerie Warden. You’ll be wanting to plan out your turn six as often as possible to drop this card.

Stealth is your best friend here. Stranglethorn Tiger is the absolute optimal turn five play. Not only is it a strong turn five play in its own right, it leads directly into Menagerie Warden. And your opponent will be unable to answer it, due to the stealth element. Druid of the Saber does the same job, although obviously much worse.

The single Savage Roar is in the deck as a win condition apart from simply dominating the board. It’s a great way to pull a bunch of damage out of nowhere, and can easily end a game that was only half over.

This section will discuss the hypothetical matchups this deck will have. As the deck is not out, these have not been tested, and are author opinion only.

This deck goes fairly even with aggro. It has all of the tools to win the battle, it just comes down to drawing them. Your favourite cards in this matchup are Enchanted Raven, Innervate, and Living Roots. As long as you are able to stave off their early game you are in good shape.

This deck is midrange! This very much comes down to who can get good value off of their combo cards. If you can pull off a nice Menagerie Warden, you should be solid. Try to end the game earlier than later, as many midrange decks run stronger late game than your. If you can curve out with Innervate, all the better.

This deck has difficulties against control. You’ll want to heavily press your early game advantage in order to win. Against Warrior, flood the board with things that have more than one health as early as possible. Against other classes, try and line up your threats one after another. Simple bum-rushing can do wonders! Make use of your stealth, control decks have difficulty with it. Get good Menagerie Warden value.

Previous articleBarnes Has a Lot of Potential!
Next articleHearthstone Creativity Is Misplaced 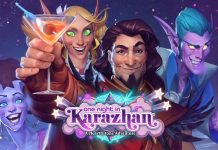