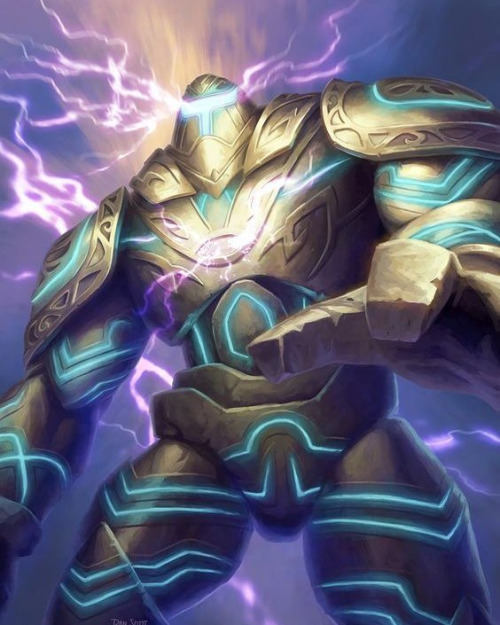 Barnes wasn’t the only fantastic new card introduced this week. The second wing of One Night in Karazhan also brought Arcane Giant. Arcane Giant is the new spell based giant, his cost is reduced for spells played. The mechanic isn’t new, but the strength behind the card certainly is. Because of how strong Arcane Giant is, he has spawned entirely new decks. He also fits in well with several other existing decks, adapting to and improving the decks overall. Let’s delve into what decks he has had a hand in altering. 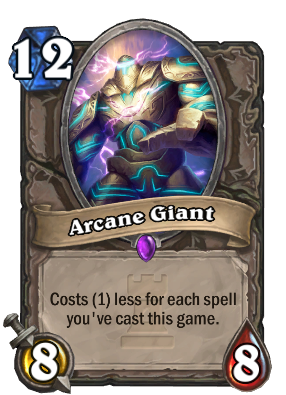 Obviously Arcane Giant does well in decks that already run a lot of spells. Ones that can churn out spells quickly benefit most. The easiest fit for him is in Yogg Druid. The deck already runs mostly spells, and does quite well at playing them quickly. Cards like Innervate are especially good, as you effectively reduce the cost of Arcane Giant by three by playing it. The fact that the deck naturally ramps is also quite useful for early Giants. It also strengthens the deck quite a bit. Yogg Druid’s weakness is against board clears, while Arcane Giant is highly resistant to those. Overall it’s a very nice fit.

Another deck where Arcane Giant fits quite well is Miracle Rogue. Miracle Rogue is all about getting out a Gadgetzan Auctioneer and proceeding to play their entire deck. If they are able to get to this point, playing twelve spells is easy for them. Following up their spell spree, two Arcane Giants into Conceal is quite effective. It remains to be seen whether it is more or less effective than Miracle Rogue’s other win conditions.

The most notable new deck to arise from Arcane Giant is Reynad’s new Warrior deck. It is very similar to the old Echo Mage, or even the Molten Giant Warrior decks from long ago. The idea behind the deck is cycling using spells before creating many duplicate Arcane Giants. Using Blood Warriors and Faceless Manipulator, creating a dozen Arcane Giants is fairly easy. Because Warriors inherently have such good board clear, it’s fairly easy to last so long while you prepare.

The deck fares quite well against most opponents, as there are very few decks that can handle ten 8/8s. The only difficult matchups are hyper-aggressive decks such as Aggro Shaman. Unfortunately this deck is very time-reliant, unlike the old Echo Mage decks. Unlike them, you never want your life total to be low, other than for Battle Rage. This means heavy cycling is necessary in order to go off as fast as you can against aggressive opponents. Making use of Inner Rage and Charge, as well as Faceless Manipulator, can easily end a game on the spot. Try it for yourself!

Arcane Giant’s release has been a rousing success so far. He’s promoted quite a bit of deckbuilding, while also boosting some existing decks. He isn’t vastly overpowered, and is quite difficult to use properly. Arcane Giant may actually be my favourite card of the set. Difficult to use, fun to play, and highly rewarding!

Previous articleCompetitive Hearthstone Is Turning into a Joke
Next articleBarnes Has a Lot of Potential! 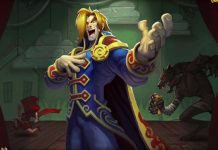