Today I spent about 120 Chaos Orbs in Path of Exile, gearing out my new character. That’s not a lot, as far as high-end gear goes, but it’ll do for now. The entire process took me several hours, and involved a decent amount of trading. And trading in Path of Exile is not easy. Not only do you have to understand every item, you also have to find someone selling exactly what you want. That might not sound any harder or more complicated than the arbitrary marketplaces of most online games, but it is.

There’s no Auction House in Path of Exile, which is understandable considering Diablo 3’s failure. This missing feature wouldn’t matter that much, but the lack of an organized and logical trading system can leave newcomers to the game disheartened and confused. To show you just how difficult trading can be in Path of Exile, I’ll walk you through a typical trade.

A Typical Low Cost Trade in Path of Exile

We’re going to be buying something cheap. If you’re new to the game, these purchases will constitute the vast majority of the transactions you’ll make, at least for now. As I said, Path of Exile doesn’t have an in-game system to help you find the goods you’re looking for. However, Grinding Gear Games do allow Path of Exile’s API to be accessed by external sites. In many ways, these third-parties have become the de facto overseers of the game’s digital economy.

In order to make a trade, the seller must have purchased a Premium Stash Tab–these are the only ones that allow you to publicly list items. The seller will then need to put the item they want to sell in the correct tab, make that tab public, and decide on a list price.

Here’s where you come in.

First, go to www.poe.trade, and type in the name of the item you’re looking for. This can be easy if you’re looking for a unique item with a specific name. It can also be really difficult, especially if you’re looking for a generic ring with certain stats. You input all of the fields manually, and there’s a fair bit of fiddling that inevitably needs to be done when you’re tweaking the search filters. Finally, you reach a page with marketplace listings, see item you want, and decide that it’s being sold at a reasonable price. You click the ‘PM’ button, and the site copies a line of text to your clipboard. Then you go back into game and paste the text as a message to the seller.

This is where the fun starts to kick into maximum overdrive. If the seller decides to trade with you, he invites you to his party. Then your fellow Path of Exile player will, hopefully, go back to his hideout, find the item in their stash, and trade it to you. This can take quite a while sometimes, and players who are busy might decide that you’ve interrupted them at an inconvenient time and you’ll be left to start the process all over again. (This is, of course, assuming that they are still online, and at their keyboard.)

I’ve received hundreds of “that player is not online” or “that player is AFK” messages while trying to trade in Path of Exile. The players who don’t respond are the worst. For low-cost item trading, I often have to try and contact four or five people just to get a response. My personal record is twenty six messages in a row before someone replied.

After you’ve messaged a billion players, finally one responds. You get invited to their party and you go to their hideout. You make sure you have the right amount of currency, because you can’t split stacks once you’ve started trading. (I’m serious.) Once you make sure you’re being offered the right item, you complete the trade, and move on with your lives. When everything works perfectly, trading items in Path of Exile can take a couple of minutes. When it doesn’t, however, it can easily take upwards of half an hour to complete even the smallest transaction.

The Benefits of Path of Exile’s Trading System

What I’ve described above highlights the negatives of the current trading system in Path of Exile. It takes too long, and dealing with nonresponsive traders is a mindblowingly aggravating experience. Tracking down the perfect item only to discover an AFK player feels like the game is kicking you in the balls.

That being said, there are a few upsides to the trading system, at least in comparison to the typical Auction House model found in other online games. The first benefit is that Path of Exile isn’t subject to the same level of bot abuse as you find in other games, and there’s no more obvious example than Diablo 3. Blizzard made the mistake of shipping the game with a built-in Auction House that incorporated real money transactions. You could buy in-game money with real money, and the potential for economic abuse via botting accounts en masse was simply far too high for it not to be a miserable failure. And it was. Thankfully, Path of Exile has avoided traveling a similar path.

There is something to be said for how the needlessly complicated trading system makes the game more enjoyable. Because trading isn’t easy, players don’t trade things that aren’t worth much.

If you find something you can vendor for one Orb of Alteration or sell to another player for two, you’ll just vendor it. The hassle isn’t worth the profit. But if you could easily list it and have it sell fairly quickly, it would suddenly become worthwhile. The market would presumably be flooded with low value items that players previously wouldn’t have put in the effort to sell.

This would mean that leveling up would become almost completely trivial, even on your first character. You can buy some decent gear for almost no money. It’s the hassle–and the associated markup related to that hassle–that stops you from doing so. If every player could buy a good new weapon every few levels, the game would be too easy.

If you’re going to use the current trading system, there are a few things you should know:

Path of Exile’s trading system does need improvement. Some of the issues are fairly trivial, like the fact that people are often AFK. And sure, it’s obnoxious when a seller keeps a listing up despite not being interested in actually trading the item. But these are inconveniences, and addressing the ongoing issue of price fixing should certainly be a priority for Grinding Gear Games moving forward.

There are, I want to stress, benefits to Path of Exile’s current trading system. It makes the game harder, and it prevents bots from running rampant.  The trading system slows down the game and forces you to make difficult choices about you want to spend your in-game time, and it’s up to you to decide whether or not that’s a good thing.

Personally, I’ve grown rather fond of it over time. Trading needs some love from the development team, but it does have a certain antiquated charm to it. Since trading isn’t going anywhere anytime soon, we might as well learn to love it.

Did you miss the beginning of our Path of Exile coverage? Get caught up by reading an introduction to one of our favorite games of 2017 here.

Previous articlePath of Exile: The Weirdest Builds
Next articleInternational Tabletop Day: A Celebration of Community 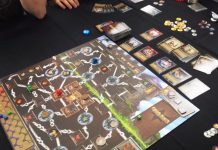