League of Legends Warren Francisco -
-23
Riot Games, despite being busy after giving us a boatload of stuff to drool over due to their 10th anniversary celebration, has...

Dota 2 Eugene Torubalko -
-38
If you are new to Dota 2, you may be taken aback by the amount of information, heroes, items, mechanics, strategies, etcetera in the...

We know how weird that sounds. AFK builds? What are they, bots? No, but in Path of Exile, you can set yourself up to become virtually invincible with the right items/stats/skills. Some of these builds also deal damage back to the person hitting them. As a result, you can clear content while not touching a single button – this is why they’re called AFK builds.

How efficient are AFK builds at clearing content? Not very. There are few areas in Path of Exile that you’d want to AFK in anyway, since the mobs near you would die, and then you’d have nothing left to hit you. And even if mobs were constantly coming at you, these AFK builds are much weaker than any normal build. This is what keeps builds balanced. You can’t just walk away from your computer and gain five levels. But they do push the limits of what’s considered possible and viable in Path of Exile, and theorycrafting AFK builds is definitely entertaining.

This is a build I highlighted last league as one of my favorites. It made use of ignites to deal damage by having a thousand spells go off every time your character gets hit by anything. You would have a bunch of low level spells on low level Cast When Damage Taken (CWDT) setups. When you got hit, all of these low level spells would go off. Through various methods, you would have a high ignite chance on these spells, so they would ignite the enemy pretty much every time. This would cause a reaction with your amulet, saying that you take 100 fire damage every time you ignite an enemy. This chains into your CWDT setup, shooting more spells and causing more ignites. And so on and so forth.

Eventually you’d take enough damage to set off your high level CWDT setup and spells, dealing even more damage. (You can check out this guide for details about how to get the build running. The video below was made during 2.6, but the guide has been updated for 3.0 and still works.)

You could also wear Abberath’s Hooves so that your opponents wouldn’t need to hit you to start the process. You walking over them would cause the first ignite, starting the chain. If that wasn’t enough, you could activate your Doedre’s Elixir, causing damage to yourself and shooting off even your high level CWDT setups.

How does this AFK build stay alive? Well, it makes use of Razor of the Seventh Sun to mitigate all the damage you deal to yourself. Razor heals you for 1% of your max life every time you ignite an enemy, which offsets the 100 fire damage (after reductions, this number shrinks to under 25). In fact, it actually heals you.

You’re also a Berserker, which means every time you take 15% of your max life in a single hit, you leech 100% of the damage you deal back as life. Ignites are enough to keep you alive against small enemies, Cloaked in Savagery is enough for big enemies. All of this paired with Vaal Pact of course, and a life pool that sits around 10,000.

Unfortunately, one important aspect of the build was neutered in 3.0, which is that ignites don’t stack up anymore. You can no longer use Emberwake to enable incredible damage numbers. Note that the build still works perfectly, your damage is just much lower. To offset this, the creator put in a Magma Orb setup in the belly, allowing for a ton of extra damage, and even more ignites to set off your CWDT setup. Of course, when you’re using this you’re not truly AFK, but you can still AFK just fine, your damage will just be much lower.

Remember when I said there’s no real need or desire to AFK in any area? Well, there is one. Golems can take out Shaper easily while you’re dead. That’s right, as long as you can get to the final Shaper area and have the right setup, you can happily die, sit back, and let your golems do all the work. The reason behind this is that you can stack up enough defenses and regeneration for your golems that there isn’t anything in the game that can kill them fast enough.

(The full build guide can be found here.)

Unfortunately, this build isn’t quite as interesting as the others. You can choose to go either Necromancer or Elementalist, both have their upsides, but most people prefer Necromancer now. You wear one or two Clayshapers for additional golems, and get points on the tree for more golems. And then you just stack a billion Primordial Jewels on your skill tree. The Anima Stone lets you have two more golems, Primordial Might makes them more aggressive which improves the AI considerably. After that, you stack as many Primordial Harmonys as you can find jewel slots. Each one significantly increases the damage output of your golems, and gives them +2% life regen per second.

Once you’ve finished your build and your tree and have 8+ Primordial Harmonys, you’ll have golems regenerating 25-30% of their life per second, and each of them have life pools that are over 20,000. Even when they’re standing in the middle of the hardest content in the game, there is very little that your golems can’t deal with. If you die, just let your golems mop up everything before going back in!

First off, this build doesn’t actually kill your enemies. I’m including it because it has the potential to AFK in front of the hardest enemy in Path of Exile, letting you get up, stretch, and, after you come back to the computer, kill him in a single button click. This build is designed to do one thing and one thing only: clear Hall of Grandmasters (HOGM). For anyone who doesn’t know how HOGM works, real players have submitted their characters and become a part of the enemies there. You fight through 50 other real players and claim great loot.

Why is this hard? Because of DanziGG. He’s a player who submitted a character to HOGM with the most expensive gear in the game, and that character’s build was designed to one-shot players through massive critical hits.

How do we beat DanziGG? First, we buy a Xirgil’s Crank, because every time you block there’s a chance your energy shield begins to recharge. Then, we buy a whole bunch of Reckless Defence jewels for the tree (enough to cap your block chance for both attacks and spells at 75%). After this, we stack energy shield and decrease the time before our energy shield starts regenerating to the lowest possible value. And then, we stand in a bunch of mobs and walk away.

Every time you block – which will be 75% of the time – there’s a 20% chance for your energy shield to start regenerating. Since we’re Occultists, if our energy shield begins to regenerate, the process can’t be stopped for four seconds. This gives you four seconds to block another spell and restart the regeneration process. It can be a bit iffy for the very first activation, but once you’ve started regenerating, the odds make it nearly impossible for you to stop, especially against the enemies in HOGM, who attack very quickly.

And that’s it. You block most of what comes at you, and the things that come through only help you. You can stand in the middle of swarms no problem, and in HOGM, we bring in a Scorching Ray setup to actually kill the players after we’re done laughing at them. 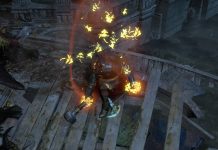