League of Legends Stephen Draper -
-416
Nexus Blitz has been a mode showcased several times now within League of Legends. It’s entirely different from the main game, and in it's...
SB Nation

In honor of Independence Day this week, here’s a feature on one of the USA’s most well known players: Clinton “Fear” Loomis.

Affectionately called “Old Man Fear,” at 28 Loomis is indeed one of the older Dota 2 pros, especially in the Western scene. Most of his home life backstory is discussed in the free documentary Free to Play, so I won’t go into great detail about it. Basically he’s an American boy from Oregon, admittedly I have never been to Medford, OR and I have no idea what it’s like to live there. Since Free to Play was filmed, Fear has a TI win under his belt along with a slew of other championships.

He’s been around since Dota 1, circa 2006-2007. That’s ten years in esports – and probably about six years of putting in a lot of hard work to a sport with a very small following. It’s really only since 2012 or so that Dota 2 and in some ways, esports in general, have crossed over into the mainstream. Many years of gaming have taken their toll, though: in 2014 Fear announced that he had developed a repetitive strain injury. He sat out during TI4 and coached the team instead, letting NA player Mason take his spot. Fear returned to active status shortly after but ran into more issues with his injury. After winning TI5, Fear swapped roles to support in an attempt to give his injury a rest. Just recently EG announced that Fear was moving back to position 1. I’m looking forward to seeing him on carry again at TI6.

Setting an example for new pros

In an article in April, I discussed Fear’s smart career moves. He’ll have an extended eSports career available if he wants it once he decides to retire.

Interviews with Fear are always enjoyable to watch.

I appreciate Fear not only for his Dota but also for his professionalism and presence in interviews and at events. While he’s extremely skilled, some of his success as a player can probably be attributed to the fact that he’s a good team player and likeable. Fear has largely steered clear of major drama-bombs. He’s always courteous on screen and his teammates seem happy to play with him. I think his conduct is an excellent example for new professional players. Fear doesn’t flame his teammates publicly, doesn’t air out dirty laundry on social media, and contributes to the scene by agreeing to interviews and sitting in on panels.

He and I are about the same age, too. It’s interesting to see someone who walked down a completely different path. It’s really gratifying to see Fear’s journey from a kid playing Dota on a super old setup to a multi-million dollar earner playing on the biggest stages in esports. He put in the time and the hard work, and he made it to the highest tier of competition.

Feels a little like the “American Dream” doesn’t it? 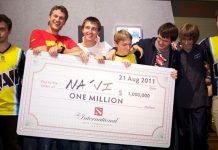