General Stephen Draper -
-6.8k
Path of Exile Shaping Before you start shaping your Path of Exile Atlas, we suggest you read our introduction to the Atlas. Once you have...
Annie "AnneDroid" LeClair. (Photo courtesy of Moonduck Studios.)

Annie “AnneeDroid” LeClair’s rise from an amateur caster who set up a makeshift studio to cast games in her college dorm to a commentator at The International 2016 is an inspiring tale of dedication, perseverance, and talent. Annie took the time to talk with me about her views on the Dota 2 community, how she found her place in it, and what the future holds for the game.

Annie started out as a Dota player, but decided to start casting games in her spare time. For two years, she would spend five to six hours a day broadcasting from her dorm room after and in-between classes. She tells me that in the early stages of her casting, she knew if she could find the hours to dedicate to growing her talent, she’d get a big break. Eventually these hours of practice caught up with her, and she made the difficult choice “to be more involved with Dota than college.” Getting where she is now hasn’t been an easy ride, and Dota 2’s talent pool is full of well-deserving casters. Annie’s goal has always been finding a way to stand out from the crowd.

“It’s the right combination of talent, luck and ambition. You have to be casting enough hours to get your voice out there, and you have to be good enough so when that moment comes, you will shine,” she tells me. That moment for her was came in the form of an email from David “GoDz” Parker who made a last minute request for her to cast for 15 hours the next day. It was an opportunity that Annie says came to her from a combination of “persistence and luck.”

First Dota event + my most recent. From casting in my basement to casting a LAN Grand Finals. So happy to see how far I've come in a year! pic.twitter.com/L18nZQ0Wvr

When we spoke about her career and what her plans are for the future, Annie’s passion for her work is self-evident. She compares her job to being a narrator who’s “telling the story of the game.” Annie loves finding the small details in game of Dota, and it’s this meticulous attention to detail that’s shaped her casting style. “No matter who’s winning or losing, there’s always a story to be told.” Annie isn’t just calling out the plays in real time, she’s finding the right pieces of information to share with the viewer to make the story come alive.

Being part of the Community

In the years leading up to her appearance at TI6, Annie had been nervous as she stepped into a more public role. As she had started getting more and more gigs, she admits that she expected to be treated with hostility as a newcomer. Others might see her as an outsider or, perhaps, as a threat. But much to her delight, she was met with kindness, especially from Jorien “Sheever” van der Heijden who was a constant source of support and helped her hone her craft. What she wants for the community as a whole is simple: “Become more supportive of one another.” This is true in your pubs, but it’s also true for esports professionals. To support others when opportunities are granted to them over yourself is difficult, especially in a community filled with aspiring casters and analysts. Annie’s willingness to set aside petty workplace grudges in pursuit of a more welcoming environment for everyone is a rare quality.

I think one of the things that impressed me the most when talking to Annie is how grounded she is. We talked about the moments when we’ve been starstruck by seeing players or personalities in person. These moments are, Annie tells me, fleeting, and it’s become clear to her that it’s difficult not to bond over a shared passion for something as time-consuming and complex as Dota.

In this sense, the entire community is just a group of nerds who adore Dota 2. It’s easy to understand how Annie rose to the position she is now. She’s smart, understands the flow of the game at a high level, and has a tireless work ethic. She’s also far too humble to ever describe herself like that.

After we had talked about the Moonduck house and the need for a newcomer stream at TI7, Annie paused. Dota 2 has given her the chance to chase her dreams, she tells me. It’s a rare gift, and Annie cherishes every moment of it.

Valve’s recent changes to Dota 2’s tournament structure is very telling about what the future of the game holds. By forcing tournaments who want the support of Valve to have teams from all regions attend majors and minors, Annie notes that there will be more opportunities for casters. While the growth of the community is important, the growth of personalities and media support teams is equally important. This last year proved that with the limited major tournaments, the same pool of people were invited to the big events. Annie admits that she was worried. Casters at her level who are “hungry for content,” as she puts it, didn’t have a chance to prove themselves to viewers and audiences. She hopes that the new changes will mean that there are more opportunities for new talent to emerge.

Previous articleDota 2: How Team Liquid Won TI7
Next articleWatching Dota 2 for the First Time: What You Need to Know 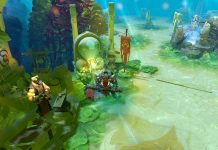 Watching Dota 2 for the First Time: What You Need to Know