General Stephen Draper -
-6.8k
Path of Exile Shaping Before you start shaping your Path of Exile Atlas, we suggest you read our introduction to the Atlas. Once you have...
Image via: playstation.com

Juri, the newest character in Street Fighter V, is expected to be released on July 26th. As Capcom originally launched SFV, they did so with several assurances to the players. One of which was the story mode (which was added to the game last month along with Balrog). Another was the continuing release of new stages and characters. Juri is a part of Capcom’s ongoing effort to keep the game fresh and up to date. Those lucky enough to be at Comic Con in San Diego got a sneak peek and some play time with her already. The rest of us have to wait just a few more days.

Juri was first seen in Super Street Fighter IV as a South Korean Taekwondo expert. Employed by the main antagonist in SSF4, she was a heel in the story and seems to be continuing her stint on the “dark side” of the character list. According to the official blurb from Capcom:

“Juri is a sadistic fighter who enjoys violence and loves tormenting her prey, with a tendency to get involved in anything she deems as fun or dangerous. Fueled by hatred of Shadaloo and M.Bison for the murder of her parents, Juri joined S.I.N. to seek revenge and doesn’t care who she has to annihilate to achieve her goals.”

Justin Wong, one of the top SFV players and fighting game legend, has said that Juri is a “Guilty Gear type character.” His reasoning being her dive kicks and advances. We’ll have to wait until the release to see if she is similar to her form from SSF4, but the trailer looks like that will be the case.

In Super Street Fighter IV, Juri was known for her wide range of kicks. Makes perfect sense, she is a Taekwondo expert after all. Spacing and range are important when playing Juri (as it is with nearly everyone). One fun thing about player Juri in SSF4 was her fireballs. The fireballs were short range projectiles and could be charged, then thrown later. The reveal trailer shows no projectiles, but I feel like Capcom leaving out the fireballs would be a huge mistake.

So Juri is coming, what else is in store for the update? Well, as the Taekwondo badass is being released as a playable character, both her Story and Premium Battle costumes will also be available. Juri will also have her mini story released which will be free DLC to all SFV players. 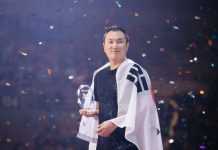