Reviews Elizabeth DiCesare -
-314
ROCCAT Vulcan 120 AIMO Are you in the market for a new gaming keyboard? If so, I recommend checking out the ROCCAT Vulcan 120...
It's High Noon...

Blizzard’s Geoff Goodman, Principal Designer on the Overwatch team announced that McCree will likely be seeing some changes (nerfs) in the near future:

I’ve been watching McCree carefully since we’ve released. McCree’s flashbang plays an important role in being a strong option against very fast/agile teams (tracers/genjis/etc). It is also a nice tool to prevent close range devastating abilities and ultimates such as Reaper’s Death Blossom.

That said, its probably a bit too good at dealing damage to higher health targets such as Tanks and barriers. I don’t have any concrete changes yet, but I’m going to be testing some things internally to see how he plays.

Despite Overwatch only being officially released a couple of weeks ago, the community has been quick to jump the gun on calling for McCree nerfs. Is his strength a result of under-developed strategy, or is he actually a little too over-tuned currently?

In a mano e mano battle, McCree beats all – for the most part. His Flashbang + Fan the Hammer combo are enough to obliterate nearly anyone on the cast in a second; those who survive are fanned again after a quick Combat Roll. This part of his kit was actually meant to exist, as a means of shutting down mobile assassins like Tracer, Genji, and Reaper. The problem isn’t that he’s shutting them down too hard. Rather, it’s that this combo is actually capable of shredding tanks as well.

At maximum damage, Fan the Hammer will deal 420 (70*6) damage on hit. Only Roadhog, D.Va: Mech, Reinhardt, and Winston have more health than this. That being said, as tanks they will already be taking some punishment and would more often than not be left dead after being fanned out to dry.

McCree also has some pretty decent range due to the accuracy of his primary click – he’s no sniper, but he can definitely hit down the Pharah that’s flying through the air about to rain down justice on your team.

Lastly, his trump card, Deadeye, can really wreak havoc on the enemy team. Although in casual play you’ll see this ability pick up some insane collateral kills simply from flanking and being sneaky-beaky like, it is also a tool with some incredible synergies demonstrated in professional play. The point-and-click nature of the ability also means that players with the sickest movement are unable to dodge it.

Cloud 9’s SureFour puts on a dominating display, while AZK captures the McCree of the game.

Currently, the most defaulted meta team composition has 2 tanks, 2 supports, and 2 carries. While this may be a problem in itself, a bigger issues lies in the fact that double McCree is seen more often than not. He really has no gigantic weaknesses that can’t be avoided. His ability to also bring opponents’ skill down to his own level makes him an incredible pick for pro play (League of Legends fans – think Pantheon, but useful).

Although teams have experimented with various compositions and strategies, McCree tends to be the most picked hero across the board in both North America and Europe.

The synergies with McCree really come to light in competitive play. With Lucio being one of the only real two support options (basically at least one in every game), a speed boost combined with Deadeye make for a fast moving McCree that can still drop the point-and-click 1-shot ultimate. Reinhardt and Zarya also create some great opportunities for McCree to get Deadeye off, since they can effortlessly shield incoming damage.

Because in reality, there are no hard counters to this guy. For one though, he loses any duel with a skilled Widowmaker. The talented snipers in professional play like Taimou, Reaver, and Grego are able to shutdown McCree before he can enter dangerous range on maps like King’s Row, Hollywood, and Dorado. Even within those maps, there are various smaller chokes that McCree can abuse to gain his advantages, not to mention the fact that he can generally avoid sniper’s vision.

Genji and Zarya have conditional counters to McCree’s Flashbang Fan combo. Genji can technically deflect the flashbang, though you need to either have pretty insane reactions, or just make a hard read; this ultimately turns into a mind-game in a lot of duels, which is healthy for the game’s design. Zarya’s two shields prevent the stun and damage from going off. With her recent insertion to competitive strategy (albeit infantile), she may become the factor that brings McCree down to a manageable level.

I have to hand it to the haters – he’s at least a little broken. After watching countless professional matches, seeing him played by some of my skilled colleagues, and logging 11 hours on him myself, I can soundly say that he’s probably the most overpowered hero in Overwatch as it stands currently. His skill floor is fairly low – the barrier to entry is learning how to stun someone and kill a stationary object. The ceiling could be much higher than I can tell, but he seems to level out the playing field too much in competitive play.

His actual gameplay style is pretty healthy though. He should be a check and balance for overbearing assassins, while creating some fun interactive situations and an ultimate that can be incredibly rewarding or totally shutdown.

In all likelihood from reading Goodman’s comments, McCree’s Fan the Hammer damage will be reduced. Another alternative solution could be giving it a cooldown, similar to how Lucio’s secondary fire works. I’m a fan of either of these solutions. While it might take my favorite character out of “S-tier” status, I believe a change will improve the long-term health of the game greatly.

Previous articleOverwatch: Big from the Start
Next articleTop Tips for New Overwatch Players 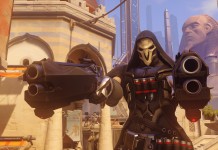