Last week, we talked about the basic functions and abilities of support champions in League of Legends: initiation, disengage, healing, shielding, pick-offs, general protection, tankiness, damage, and crowd control. To give that list some context, I’d like to talk about the best supports in patch 7.14, and dive a bit deeper into how these supports can fulfill your team’s various needs.

Let’s take a look at OP.GG’s champion analytics data, which gives us the pick and win-rates for support champions in Platinum games and higher:

From this screenshot, you’ll see that there are currently 15 champions with a positive win-rate. With buffs to Taric and Alistar in 7.14, both champion’s win-rates have both risen by about 2% in the past week. Another notable rise in win-rate came to Janna, who has dethroned Thresh as the top support, with her win-rate also rising about 2% in the past week. This pool of champions is a good starting point for figuring out which champions can be expected to deliver above average performances in a given game.

Which Supports Should You Pick And Why?

Now, let’s pretend you’re in champion select, and these champions are in your theoretical champion pool. As a support player, you should be balancing the needs of your team’s composition with the desire to have a good lane matchup. Early in a draft, I find versatile champions like Thresh to be optimal picks, whereas later in the draft, picks like Trundle or Leona can really shine. The more narrowly useful your pick is, the more exploitable it is as the draft continues. This is true for all roles.

With the exception of <1% pick rate champions, I’ve classified each 50%+ win-rate champion according to their strengths and strongest utilities:

Janna is very focused on disengaging and protecting her team, and she’s not a great play maker or initiator. Extremely disruptive against melee champions and bruisers especially. An excellent choice for auto-filled supports.

Thresh brings infinite playmaking with his Q, W, and E, plus The Box (R) is a great disengage spell. Because of his versatility, he can be picked blindly and early in the draft. His biggest weakness is his low-damage and lack of armor early game (need to collect souls for armor). He is also the type of champion that can overdo it with playmaking attempts.

Taric brings a lot of defensive tools: a heal, shields, an AoE stun, and teamwide invulnerability. Because it’s a skillshot, his stun is the most important spell to use correctly. At best, you can stun multiple targets. If a match starts going late, the 2.5s of invulnerability granted by his ultimate can easily win you the game.

Alistar’s ability to split-second engage with a Flash-Q combo is unrivaled, but he also has great peeling tools if he wants to play out a fight more slowly and concentrate on protecting his carries. He’s more versatile than Leona, whose engagement options are a bit more straightforward.

Soraka is undeniably the best healer in the game. She’s a great pick when your team is already capable as a 4-man squad – the heals will just empower them further. Her CC abilities (Q, E) are best suited for kiting and disengaging, which is what you should be doing with this champion. Keep in mind that you’re not very good at initiating teamfights.

Like Thresh, Sona is fairly versatile, yet her skillset is the polar-opposite of Thresh. She is squishy, brings damage, healing and shielding, and grants teammates movement speed. Her squishiness can be her undoing, as anyone who tried to ward Baron at 40:00 can probably attest.

Blitz can win the lane (or even the game) off a single hook, which lends himself well to snowballing. He offers three types of CC: displacement, knock-up, and silence (especially rare). His burst damage is fairly relevant in early-mid game, too.

Bard’s kit lends itself well to roaming and playmaking. Because Magical Journey and Tempered Fate can be used offensively or defensively, he is a great pick for players looking to win creatively.

Leona is the engage support. Because she is so single-minded, she can be a little exploitable and even prone to feeding on trigger-happy Summoners. Still, if your team needs engage more than anything else, she is a great choice.

Brand is the best choice for players looking to dish out damage from the support role. His playstyle benefits a vision-focused player – someone who can get vision around neutral objectives and establish a “zone of control.” Blindly enter the zone and facetank a ton of damage.  Sear (Q) also works as a disengage spell in a pinch.

You don’t want to pick Trundle against high damage or high mobility comps. However, he really shines against tanks and immobile champions. Subjugate can be used to cripple a tanky frontliner, and Chomp is a useful debuff against AD champions. Frozen pillar is supremely annoying at all stages of the game, although it was nerfed in 7.14 to no longer give vision.

Which Supports Should You Ban?

Last week, I suggested that if you’re going to ban a support, ban Thresh or Blitzcrank (whichever champion you feel you are weaker to). They’re both high pick-rate and high win-rate champions. They’re still good bans, but I’ll add one underrated ban in the same vein to that list: Janna. I feel heretical for suggesting that you ban the 103rd most banned champion in the game, but if you play bruisers or divers, Janna is supremely effective at preventing you from doing your job. Janna is more understated than flashy, but she can invalidate entire playstyles. If your team wants to dive carries, why not ban the biggest cockblocker of all time?

Previous articleThat Time I Played Against the Best Top Laner in China
Next articleLeague of Legends: What Makes a Good Support Champion? 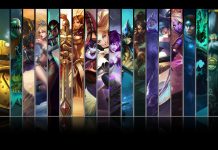