General Stephen Draper -
-6.8k
Path of Exile Shaping Before you start shaping your Path of Exile Atlas, we suggest you read our introduction to the Atlas. Once you have...
(Featured image via Crow_Se7en.)

After interviewing Chris “Phoenix” Robinson of DeafGamersTV, Thomas “Crow_Se7en” Moy reached out to Esports Edition to give us his perspective on being a deaf gamer. He is an aspiring professional Overwatch player and vlogger. Thomas has a great sense of humor and unique experiences playing on his university’s Overwatch team – read on to learn more about him! This interview has been edited for length and clarity.

You’ve started recording videos and your channel is growing – where would you like to see your channel and yourself in a year?

I want people to understand that I can do it. When I watch Markiplier, PewDiePie, JackSepticEye, and other YouTubers, sometimes their videos didn’t have closed captions, or the closed captions weren’t perfect. Have you ever seen the YouTuber who plays video games and uses American Sign Language at the same time? That’s why I want to do this for deaf people.

There are many deaf people with great talents like Daniel Durant (actor), Sean Forbes (hip-hop artist), Rikki Poynter (YouTuber), CJ Jones (actor), etc. I would like to mention my friend, Kenny Sadowski. He’s my best friend, former roommate, and classmate at college. He’s also the best deaf DJ. His songs are awesome. He’s appeared several of my videos, and we played Garry’s Mod together.

You used to play on an Overwatch team in college and you all developed a system to communicate quickly through text chat – were your teammates receptive to the process/working with you to facilitate communication?

Oh yeah, they were completely understanding. We worked together and made the plans before scrimmage started. They asked me if I could play Ana, and I said, “Sure, I can play Ana.” I wasn’t bad with Ana but I kept practicing with her until I got better. The player told me to keep my eyes on Genji. He pressed the “Z” button repeatedly to tell me that he was ready to use Genji’s ult. I was ready to nano-boost Genji, and everything was great. If Genji’s ult is not ready, I can still nano-boost Reinhardt anytime. I learned that I had to use my ult often, and not waste our time.

Were there any moments where your communication system with the team failed?

Yes. I played with Lucio and I didn’t know when should I use Lucio’s ult. When I saw my teammates had low health, I decided to use Lucio’s ult. I was supposed to hold the ult until Zarya used her ult. It was too late and we lost the scrimmage.

Would you want to join a competitive Overwatch team again?

Yeah, I would want to practice with them if I was still a college student. I graduated from college in Spring 2017. Now, I watch Overwatch League and I’m still learning from professional players. I’m still practicing with Zenyatta; I want to play like JJoNak from New York Excelsior.

Can you imagine if I was the only deaf player in Overwatch League? Would it change Overwatch League and the esports community? I know there is only one way that I can do it, but I wish I knew how, and where I could start.

There are some debates about whether or not esports tournaments should include all players, or have separate leagues, such as female-only tournaments. Do you think it would be beneficial to have deaf/hard-of-hearing tournaments or leagues?

When you play Overwatch pubs, are other players insistent on using voice comms? Have you found that people are generally understanding if you don’t want to use voice comms?

Well, I know that there are a lot of salty, toxic players. When players ask me to join the voice chat and I said no, they decided to throw the match. They don’t really understand when people don’t want to use voice chat. I could have reached master rank if players cooperated. I reached diamond rank once, then I got players who threw the matches. I lost a lot of SR points.

If you could have Blizzard implement a suggestion to make Overwatch gameplay more accessible for deaf/HOH players (provided you think there’s room for improvement), what would it be?

It would be really nice if they add ASR (Automatic Speech Recognition). It’s like speech to text. When hearing players talk with the mic, the text messages appear in the text box. Microsoft tested speech to text accessibility features in Halo Wars 2. I created a post in the forums about speech to text and closed captions.

How could Overwatch tournaments be broadcasted in a way that deaf/HOH fans could enjoy them? Does anyone add CC to the tournament VODs so the commentary is accessible?

Twitch should add CC to tournament VODS. I really like watching Overwatch League, but I can’t understand what they say. Broadcasts should use CC for live news and sports.

Check out Thomas’ YouTube channel for more great videos about his gaming experiences as well as clips and vlogs of his favorite games!

Previous articleFortnite Mobile: Is It a Worthy Addition?
Next articlePath of Exile: Ascendancy Buffs 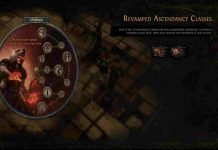