If you’ve made it to the end game of Path of Exile, you’ve probably heard of Vault farming. If not, Vault farming is the most consistent way to make money through mapping. This is because Vault drops two divination cards that reward Exalted Orbs. In this league Vault is incredibly strong, because it was relocated on the Atlas. Now, you can apply seven sextants to it easily. It was also bumped up two tiers, so it gives more experience, although that probably won’t matter here.

If you’ve gotten this far, you might have heard of Windripper farming. It’s no secret that the best way to optimize your Vault profits is with Item Quantity (IQ) gear. Adding more IQ means more drops, plain and simple. Increased Rarity doesn’t do a ton for us because we don’t care that much about Unique items. We’re farming for pure currency drops and divination cards, neither of which are affected by rarity. So IQ all the way!

This is where Windripper comes in. Windripper is a bow that grants 15% IQ from frozen enemies. Since we freeze nearly every enemy with Herald of Ice and our critical hit probability, this is basically a 15% increase in IQ across the board. With IQ farming being the best way to get gold, this is just one more IQ item that pushes our farming to the next level.

The core of your build remains the same, regardless of which route you decide to take. For the weapon, you’ll obviously want a Windripper. Windripper isn’t an incredibly strong bow, as far as meta bows go. But, as we’ve discussed, using it allows you to have a much higher profit through the IQ on it. As for an amulet, you’re going to be using a Bisco’s Collar. It’s hard to get away from using Bisco’s at the best of times, so in an IQ build it’s unavoidable.

For your helmet, you’ll need one with the “2 Secondary Tornado Shot Projectiles” enchantment. Preferably on a Devoto’s Devotion, since it gives you the movement speed you’ll desperately want. If that’s too expensive for you, a Starkonja can work as well. In this league I personally believe that Stygian Vise, plus a strong Abyss jewel, is better than Headhunter, so get one of those as well. For your quiver you have the choice between using a strong rare quiver (potentially a +2 arrows Shaped quiver), or a Rigwald’s Quills. Personally, I don’t seen the need for Rigwalds, as I have no issue killing mobs. I prefer using a strong rare quiver for more single target damage. For your boots, use corrupted Darkray Vectors to add +1 to maximum frenzy charges.

Lastly, use two Ventor’s Gambles to fill out all your extra resistances, as well as increased quantity. Increased rarity on the Ventors doesn’t really matter, it’s fine if it’s reduced, as long as the other stats are good. Quantity will obviously be your most desired stat, but you still have to hit 75% of all resists. For Jewels, use the new Abyss jewels with increased flat elemental damage to both attacks and bow attacks. Make sure that every jewel has a critical strike multiplier on it, as that will be your biggest boost. Feel free to fill them out with life and resists as needed. Make sure you get a Lioneye’s Fall to turn the claw damage into bow damage.

If you don’t mind occasionally dying, and just want the most loot possible, this is the build for you. Use Queen of the Forest as your body, as well as the items listed above. This will give you quite a few resists, a bit of life, and with our build, a ton of speed. With Queen you’ll want to run Grace as well. Between that and a Jade flask you’ll be insanely fast.

For your gloves, take Sadima’s Touch. The extra quantity is unmatched. You could argue that Goldwyrms are better than Darkray Vectors for your boots. However, Darkrays add so much speed and damage that it’s difficult to justify losing them.

You should use a Jade flask for more evasion and speed from Queen of the Forest. Other than that, just use the traditional Dying Sun, Diamond Flask, Quicksilver, and Health Flask. In this build prioritize damage on jewels, as life doesn’t matter as much. You can also wear an Inspired Learning for extra speed occasionally.

This variant does similar amounts of damage, but is much safer. You trade some IQ and a lot of movement speed in favour of life and armor. It’s still a very fast farming build, just not as fast as others. Instead of Queen of the Forest, use Kaom’s Heart. You’ll obviously need to have your Windripper six-linked for this, and you’ll need quite a bit of strength. You’ll have to take at least one of the 30 strength nodes on the tree, as well as putting it on one or two jewels. But, if you can pull it off, putting on Kaoms will give you over 1,000 life extra.

For gloves, wear a pair of well-rolled Gripped Gloves. You’ll need to fill out the resists that were lost by taking off the Queen here. My pair is 74 life, 41% fire resist, and 48% cold resist, with a master mod of 12% attack speed. These give quite a bit more damage, as well as another 200 life, and fill out the resists you lost by putting on Kaoms. For your jewels, take out Inspired Learning and find a jewel with life (and probably the strength you were missing), as well as critical strike multiplier. More damage means more life, and more consistency.

For your flasks, use the same as the other variant, but switch out Jade for Granite, which will result in big Abyss mob hits. This leaves you with Granite, Dying Sun, Diamond, and Quicksilver. This variant should have you at over 5,000 life, with significant defenses, so not much should scratch you!

For your damage setup you’ll want to use: Tornado Shot, Greater Multiple Projectiles, Elemental Damage with Attacks, Ice Bite, Added Cold, and Damage on Full Life. Your Herald of Ice setup should be: Herald of Ice, Onslaught, Curse on Hit, and Assassin’s Mark. Your other aura should be either Grace or Hatred, depending on your setup. You will also want a Cast on Damage Taken plus Immortal Call setup.

Your other gems can all be unlinked. The necessary ones are Blink Arrow and Summon Ice Golem. Personally, I use Vaal Haste, Summon Vaal Skeletons (for the boss distraction), and Portal in my remaining slots. If you’re using a Queen then you can also set up a second Cast on Damage Taken with Temporal Chains and Ice Spear, plus Greater Multiple Projectiles. This just adds a bit of defense through slowing your enemies. 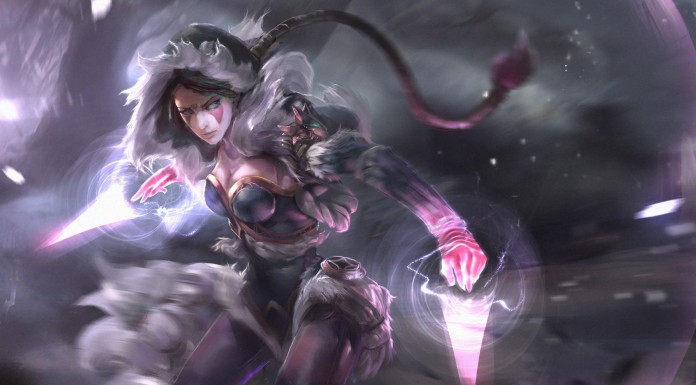 First of all, for bandits, help Alira for the resistances and critical strike multiplier.

As for leveling, level using elemental skills. Use Storm Cloud into The Tempest for your weapons. This will carry you until you can put on Windripper. Use typical leveling uniques for the rest of your slots, such as Tabula Rasa, Goldrim, Lochtonials, Wanderlusts, Karui Ward, and Darkness Enthroned. These will carry you through nearly all of the leveling phases. You can also potentially swap boots and gloves for rares with resist in later acts.

Use Split Arrow to start, with a few low level abyss bow jewels that add flat elemental damage. This will trivialize leveling. Once you can get Barrage, you’ll want to set it up in your Tabula, with your clearing skill in a four-link. For clearing use either Lightning Arrow, or jump right into Tornado Shot.

Once you get to level 70, swap everything for your endgame gear, and jump right into mapping. You should be incredibly strong for your level, even with the IQ gear. If you’re looking to farm Vault, you’ll probably want to be around level 85 before you start. The boss is a doozy, but with your Vaal skills and proper Tornado Shot aim, you should melt them quickly.