Handedness is a preference for using one hand over the other for fine motor tasks, such as throwing a ball or writing. As much as 90% of the population is right-handed and only about 10% are left-handed. Because of this disparity, we live in a right-handed world.

Most tools in our society are optimized for right-handed use. Left-handers become well-aware of this fact in school, where they grow up using right-handed desks, right-handed scissors, and right-handed pencil sharpeners. Three-ring binders and spiral notebooks are also encumbering for lefties, who must use an uncomfortable grip to write on the page.

Still, lefties are a resilient bunch, and they overcome their circumstances by adapting, and are often forced by circumstance to rely on their non-dominant hand for everyday tasks like using a mouse.

In gaming, sports, and esports, handedness ranges from being completely insignificant to being an important factor. It can play a strategic role in sports like baseball, or it can simply effect what kind of gear consumers are able to get their hands on.

In baseball—where lefties make up 25% of active players—handedness is a huge aspect of the sport, and for lefties, it usually gives them an advantage. The left-handed batter box places lefty hitters a couple steps closer to first base, making it a little easier for them to run out singles. In fact, 8 of the top 10 all-time batting averages belong to lefty hitters.

Another advantage lefty pitchers have against hitters is that hitters are more accustomed to facing righties. The novelty of facing an unusual left-handed pitching stance may be enough to keep a hitter off-balance at one of the hardest tasks in any sport: hitting a baseball.

The “novel stance” hypothesis may also be a factor in boxing, and help explain why lefties comprise as much as 25% of the sport. If most boxers are used to fighting against right-handed boxers (orthodox stance), they will be less prepared against left-handed boxers who fight in southpaw stance. Being unprepared against a boxer is no joke when the price to pay is getting knocked out.

The disproportionately high number of lefties seen in baseball and boxing (relative to the general population) may be explained by the advantage lefties have in these sports. If lefties have an advantage baseball and boxing, we will naturally see more successful lefties in these sports. But does the opposite hold true when we see fewer lefties than average in a sport? Let’s take golf, for instance, where only 5 to 7 percent of the North American market is left-handed. Do righties have an in-game advantage over lefties? According to a leading golf instructor David Leadbetter, “there’s no physical reason why a left-hander can’t be as good as a right-hander.”

I think golf’s barrier to entry–the cost and scarcity of left-handed clubs–explains why we see so few lefty golfers. While left-handed clubs are widely available today, you couldn’t always get the same equipment in left-handed varieties.

Lefties can have a tough time getting their hands on good sports gear and high-quality gaming products. Imagine you are left-handed and are interested in picking up golf. One day, your golfer friends invite you to tag along and golf with them, even offering to let you use their old set of clubs. One big problem: it’s a righty set. Your options are to switch-hit or find a different set of clubs. As a lefty, you simply won’t encounter many other lefties whose gear you can borrow.

However, a newbie right-handed golfer (or baseball player, hockey player, or guitarist) will have more options and a wider selection of gear to choose from. For lefties starting out a new hobby, it may be easier to succumb to the conformity of handedness if you already have access to right-handed gear.

Let’s pivot to esports and gaming. While there are ambidextrous and left-handed mice out there, it’s still disappointing that some options are right-hand only. Also, good luck borrowing a left-handed mouse at a LAN party when your own breaks. You’ll probably have to settle for whatever’s left in the bargain bin at your local Staples instead.

Sadly, I don’t think there is an easy fix for the issue of left-handed gaming peripheral availability. Right-handed gamers simply represent the lion’s share of the market, so companies will always cater to them first. If it’s too costly or takes too much time to accommodate lefties, companies won’t do it just to gain access to a mere one-tenth of the population. Hopefully, technology will make it cheaper for companies to design and produce products for right and left handed users, thus allowing them to tap into the entire market to the benefit of lefties.

Unexpected Effects of Handedness in Gaming

The default key-bindings in every game are selected with right-handed players in mind, and they’re often taken for granted. For example, no matter what you change your League of Legends binds to, a champion’s four abilities will always be referred to as Q, W, E, and R in common MOBA parlance. Although it’s the default, this is a terrible set-up for lefties, causing a closed-in posture and forcing your hands into an awkward position.

Of course, players are free to change their keybinds to fit their needs and preferences, but there’s at least one trade-off to straying from the right-handed defaults in League of Legends: changing your bindings to something more lefty friendly may inhibit your ability to control-click, an important shortcut for leveling up abilities. Mark that one down as a disadvantage for lefties.

One game you might never expect to see the effects of handedness in is Magic: The Gathering. Righties typically situate their deck on the right side of the table and draw cards using their dominant (right) hand. They hold their cards in their left hand and use their thumb to fan their cards out until their cards-in-hand look like this:

See the difference? Righties can identify their cards by name more easily. Lefties can read the mana costs in the upper right, but they can make a mistake of grabbing and casting the wrong card if they aren’t careful. This lefty holds two different white cards with the same mana cost. Another (out of game) advantage right handed Magic players have is that if they are accustomed to fingering through a stack of cards in the orthodox manner, they will be able to more quickly pick a card out of a stack by name than a lefty who flips through the cards in the opposite direction and can’t read the card names as easily.

This unusual consequence of handedness may seem random, but make no mistake, it’s definitely an intentional feature of the card design. Wizards of the Coast once toyed with the idea of even further benefiting right-handed players by putting mana costs and card names on the left side of the card.

The effects of handedness range from well-studied like in baseball, to merely pondered and practically irrelevant like in Magic: the Gathering.  However, if you are an athletic left-hander, your odds of success are probably higher in baseball than in any other sport. “Right privilege” might be a play on words, but it’s real, especially in schools. If you are a right-handed student and want to be considerate to lefties, one little thing you can do is avoid sitting in the precious few lefty desks when there are still righty desks available. Just remember that handedness is never the sole determinant for one’s success, whether that’s in a game, sports, or life. 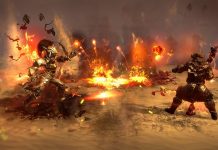 Path of Exile: A Beginner's Guide to the Atlas