Jeff Kaplan. The man. The meme. The legend. If you play Overwatch, you’ll have an intimate relationship with the man behind it all. If you don’t, there’s still a decent chance you’ll have seen some videos of Jeff over the past year.

Jeff Kaplan is the lead designer for Overwatch. His rise to fame can be partially attributed to his iconic ‘Developer Update’ video series. As the name implies, these videos explain the development team’s thought process and reasoning for upcoming changes. These decisions are largely around balancing, but also involve other things such as matchmaking, or even a lack of balancing. Jeff has become a bit of a legend within the Overwatch community for his commitment to communication. Today, we’re going to look at his style versus that of several other large games, and see how they compare.

Jeff Kaplan is the lead designer for Overwatch, and one of the priorities in his videos is explaining the vision for the game as clearly as possible to players. He makes sure to address popular opinion as well, so that he covers not only changes, but also lack of changes on things believed to be overpowered. By doing so, Jeff is able to cut down on a lot of the questions that players have regarding the direction Overwatch is headed in. It doesn’t necessarily cut down on complaining, but the complaining is at least more constructive. Or at least that’s the hope.

Developer insights aren’t something new. Some games certainly choose not to employ them, but others have had them for years. Most of them do it in the way that League of Legends does – they write a blurb about each change in the balance patch notes. Jeff Kaplan is unique in his decision to make a full length video every few weeks. This allows him to say a lot more than a blurb could ever hope to. He can explain his ideas fully without subjecting players to patch notes longer than Romeo and Juliet.

For example, in the most recent Developer Update, Jeff starts out talking about a Mercy change. He says directly “I think it’s important for me to start with: why are we changing Mercy in the first place?” He guides the players through their thought process step by step, making sure to explain the issues, the proposed solutions, and the goal for the meta afterwards. This allows him to bring the players on the same page as him and the other developers, as well as assure the players that if goals aren’t met, more changes will be coming. By sharing their vision, he shows players the end goal, instead of letting them rabble-rouse about an unpleasant or undesired nerf.

By all accounts, a majority of the community love these videos. They may joke about them, and make memes about them, but the sentiment is appreciated. Plus, without these videos, we never would have got: “wrestle with Jeff, prepare for death.”

Now let’s look at a different game entirely, with a different group of developers. This group takes the absolute opposite approach to Kaplan’s method, so much so that you’d assume they lived on opposite sides of the globe. That’s right, we’re talking about Hearthstone. The game made by the same developers as Overwatch.

Hearthstone’s lead developer is a man by the name of Ben Brode. Ben’s involvement with the Hearthstone community is much different than what you see with Overwatch. The Hearthstone development team prefers to treat the community as small children. They don’t tell us what they are doing, they give us blatantly untrue reasons for changes, and they don’t listen to us until we threaten to burn the house down. Typically, we only hear from the design team during two times. Balance changes and expansion launches. During an expansion launch, Hearthstone gets the developers we want. They are on the forums and Twitter every day answering questions. They put out videos, and write songs. It’s a good time for everyone. Then, once they’ve sold us their stuff, they disappear for three months, popping their head out briefly to announce balance changes once every 4-6 months.

At one point, the Hearthstone team said that they were going to have regular Developer Insights, but that lasted one week before business as usual resumed, and we stopped hearing from them for months. The given reasons for changes (or the lack thereof) are often suspect. Things like “we can’t give you more than nine deckslots, the technology isn’t there yet.” We finally got more than nine deck slots. They added a scroll wheel. Give the designers a medal. Last week, Hearthstone’s developers changed Fiery War Axe’s cost because “the cost number is clearly visible in your hand so people won’t forget the nerf.” Sure. Whatever.

The Hearthstone community dreams of having the communication that Jeff Kaplan gives to Overwatch fans. To us, Overwatch is the pinnacle of design teams. They care, they talk to the community as people, and they listen and respond. If we got any of that in Hearthstone, it would be a bloody miracle.

There’s a different side of the ‘good developer’ spectrum. While Jeff Kaplan tries his best to make sure everyone knows exactly what he’s thinking, there’s another developer who keeps his fans happy without a word. I’m talking about IceFrog, the legendary lead developer of Dota. IceFrog is about as anonymous as someone can be on the internet today. He goes out of his way to make sure no one knows who he is, specifically asking people who meet him in person not to say anything. His real name has been revealed in a series of leaked legal documents, but people prefer to leave it as quiet as possible, as per his wishes.

How has a man who balances such a massive game been able to keep his fans happy enough to respect his privacy? Well, IceFrog does a really damn good job. Unlike many other games, he doesn’t have to communicate with the community, because more often than not, he gets things right. He regularly discusses possible changes with professional players. He manages to communicate less than the Hearthstone team, but because he takes his job so seriously, no one is clamoring for Developer Insights in Dota 2. Patch notes are enough to satisfy the masses. The Dota 2 subreddit occasionally complains about overpowered heroes and begs for patches, but IceFrog runs the show, and he’s earned the respect, admiration, and trust of Dota’s diehard fanbase.

While I was writing this story, I asked our editor, J.P. Corner, what he thought. He commented that he prefers the IceFrog approach to what we see from Kaplan. To him, Kaplan’s approach stifles creativity. Kaplan doesn’t just outline problems and potential solutions in his videos, he also outlines the direction he wants the game to go in. When you have the lead developer tell you that “Mei is a long range support,” you typically don’t argue, even if it doesn’t seem right. Following Kaplan’s vision to the letter means players aren’t exploring archetypes and playstyles for themselves, and often default towards the design team’s vision. The Overwatch team’s insistence on “guiding” players is baked into the hero design process–Reinhardt’s shield, for example, serves a simple and obvious function. If you have the shield up, people should stand behind it, and if you don’t have the shield deployed, you’re more than likely using your other abilities.

J.P. prefers the Easter-egg-style approach that IceFrog employs. You know that he has a vision, but it’s up to you to find it. A hero was changed? Cool, what role do they fill now? You have to experiment to find out, instead of having it handed to you. This communal sense of creativity leads to the emergence of things that no one on the development team had likely imagined happening, not even IceFrog. And since they hadn’t displayed their vision to the community, it’s far easier for developers (and players) to roll with a new meta than try and ‘correct’ it. In Dota, the developers craft the game, but players mold it to their liking. In Overwatch, the developers are sculptors, crafters, and kings.

Between Dota 2 and Overwatch, the debate over which developer is “better” comes down to personal preference. Maybe you like the hands on approach of Jeff Kaplan, and maybe you prefer the anonymity of IceFrog. There’s no wrong answer there, because both developers are doing their job to the best of their abilities. Nowadays it seems most games are following the example set by Kaplan, trying to communicate their ideas to the best of their abilities. Not everyone can be as great as IceFrog, so it’s much easier to portray their thoughts than have the players figure them out.

Developers have to do their job to the best of their abilities. Not exactly a revolutionary concept. But at the end of the day, for every Overwatch, for every Dota 2, and every other current game, Hearthstone looks a little bit worse for lacking communication. Developers sitting back and changing nothing for 6 months at a time is a relic from a past when games came on CDs and developers weren’t expected to change them. The Kaplan approach is great. The IceFrog approach is different, but just as good. The Brode approach is something no developer should ever strive for. 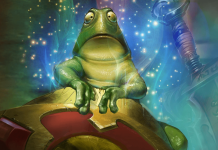