General Stephen Draper -
-6.8k
Path of Exile Shaping Before you start shaping your Path of Exile Atlas, we suggest you read our introduction to the Atlas. Once you have...
(Featured image via HearthPwn.)

For about a year, Hearthstone was commonly referred to as “Shamanstone.” This was because Shaman was simply the best class, in every area. Blizzard had given Shaman enough tools for it to play Aggro, Midrange, and Control more effectively than any other class. Well, now we have Druidstone, with the exact same problems.

Right now, Jade is decimating the ladder. This is largely due to most of the new decks being extremely slow. The new Death Knights are cool, but they’re all incredibly slow. This gives Jade Druid the time it needs to build up to 4/4 Jades and above, at that point steamrolling with over-statted minions. Control really doesn’t stand a chance, particularly new decks that aren’t optimized.

Jade Druid’s weakness has always been aggressive decks. If you kill them before they get to big Jades, they lose. But now Druid has more tools than ever to deal with Aggro. One card in particular has pushed Druid over the edge – Spreading Plague. Creating a board of 5 health taunters is, it turns out, incredibly broken, capable of stopping aggro in its tracks every time. Unless they can finish you with burn spells, the game is over for them. Jade Druid doesn’t have any real weaknesses, apart from incredibly bad draws, but even those are unlikely. 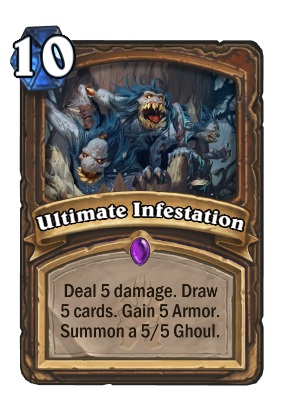 We already mentioned how strong Spreading Plague is against Aggro. Well, Ultimate Infestation is what makes Druid win against everything else. Sure, Jades are good. But sometimes you run out of steam. Not anymore. Now, your entire goal is ramping to ten and playing Ultimate Infestation.

I played a game earlier as a Druid, and my hand at one point was Nourish, Ultimate Infestation, and two random cards, on seven mana. Normally I’d seriously have to think whether I wanted to ramp to ten or draw, and drawing would normally win. Not anymore. Now I slam the Nourish to get me to nine mana, knowing I will play my Ultimate Infestation on turn ten virtually every game I am able to. And it refills everything. Kills a minion, makes a minion, gives you armour, and draws FIVE cards?!? This card would be playable if it only gave the first three bonuses, but the card draws give Ultimate Infestation “imbalanced and broken” status.

Against a deck that runs infinite card draw, what do you do? You stay alive and wait until they run out of steam. Except that Jade Idol makes that impossible. The only downside to Druid’s deck isn’t a downside: you have infinite cards. But wait, you say, isn’t there a counter to Jade Idol? Well, sort of. Skulking Geist, one of the cards included in Knights of the Frozen Throne, destroys all one mana cards in both hands and decks. This is a neat effect, but he costs too much mana, and it’s only good in one matchup, but even then he’s not that good, because Druid rarely runs out of steam. 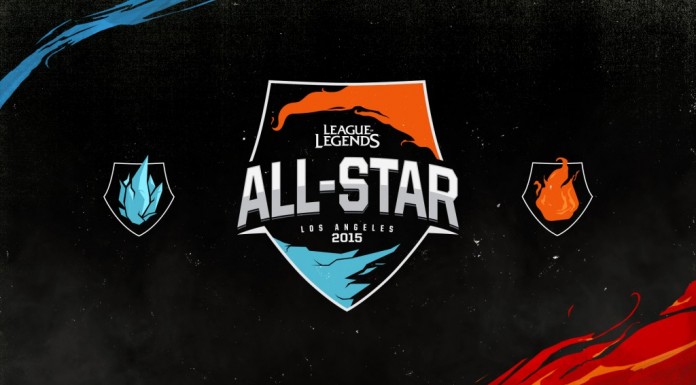 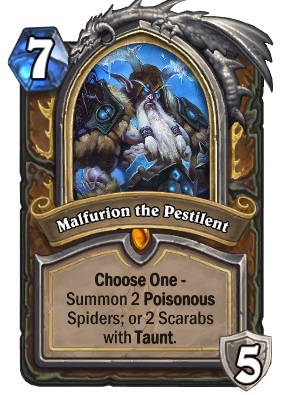 The Druid’s Death Knight is one of the least exciting ones. It doesn’t do anything new, it just makes you harder-better-faster-stronger. That being said, both the Poisonous Scarabs and Scarabs with Taunt are forces to be reckoned with, letting you either force removal or stall a board while you’re upgrading yourself. It’s also one of the cheapest Death Knights, allowing you to fit it into your curve, especially with Innervates. Not to mention the Fandral synergies, with both entry and hero power being helped.

Against Aggro, Malfurion the Pestilent is a pseudo-Spreading Plague, followed by a lot of armor. Against midrange and control, Malfurion creates removal and allows for perfect board control forever. There’s no downside to playing Malfurion, unlike many of the other Death Knights who have to be played situationally. Also, one of the biggest reasons that Jade wasn’t considered incredibly broken previously was that it was in a class that couldn’t stall too effectively. Malfurion the Pestilent gives you an upgraded Warrior Armor Up.

This upgraded Armor Up is rarely used at the moment, because Druid is just so dominant. You mostly use the hero power to control the board and push damage typically. However, there are situations where you’d want to armor up. For example, against Freeze Mage. Suddenly, you are practically unkillable, since you have three armor a turn, and can rely on Feral Rage for more. The Druid Death Knight is the perfect counter to any combo deck except Exodia Mage, taking yet another potential weakness for Druid off the table.

What Does Blizzard Have to Say About Druid?

This is probably the most dominant a class has ever been in Hearthstone. This week. Druid’s popularity hit 51% at rank one. Unfortunately, Blizzard has no interest in doing anything about it, at least from what we’ve seen. In a thread commenting on the popularity of Druid, Hearthstone Designer Iskar chimes in. Rather than acknowledge how ridiculously over the top Druid’s current play rate is, he immediately falls back on the typical response of “not as bad as Huntertaker.” For those who don’t know, Hunter using Undertaker used to be beyond broken, and made up a majority of the ladder.

Iskar goes on to say that it’s “not abnormal” for a class to be this popular just after release. We’re two weeks after the expansion’s launch, so the “just after release” window is closing rapidly, and if you look back at the last few expansions, the decks that were incredibly popular after launch continued to be incredibly popular until they were nerfed. Last expansion, we had Quest Rogue. The one before, it was Pirate Warrior and Aggro Shaman. The three of those combined were not nearly as oppressive as current Druids, who make up an even larger portion of the ladder than Pirate Warrior and Aggro Shaman combined.

Iskar does say they are considering internally if anything needs to be done about Druid. He admits that Spreading Plague is stronger than they expected it to be. However, he does not acknowledge Ultimate Infestation’s power. In fact, according to Iskar, drawing cards isn’t a part of Druid’s identity, which is interesting since Ancient of Lore and Nourish have been day one Druid cards. If we read between the lines, it seems like if Ultimate Infestation is going to be nerfed, the card draw will be the first part to go.

Unfortunately, in this case, Druid needs about three or four huge nerfs before it isn’t top tier. Jade alone would put it in tier one, but Malfurion’s Death Knight pushes it to the top. Both Ultimate Infestation and Spreading Plague would individually make it the best deck in the game. With so many cards that need a nerf, it looks like Druid is just going to sit at the top of the ladder for the next three months. Buckle up, kids. 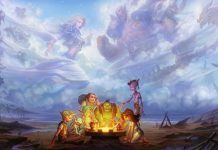