Hearthstone is a multiplayer title, and that’s what the game has always been known for. Historically, the single player side of Hearthstone has ranged from horrendous to “sort of okay.” However, the new expansion, Knights of the Frozen Throne has brought with it an entirely new single player challenge, and it’s surprisingly well made.

Hearthstone Single Player in the Past

When Hearthstone was released, the only option for single player was to play against The Innkeeper, a fancy name given to Hearthstone’s lackluster attempt at AI. The Innkeeper was not very good, and you could easily beat his hardest difficulty with beginner cards.

In the years that followed, Blizzard has added a couple new ways for people to get a single player experience in Hearthstone. First, there was a tutorial added for new players. Not just a one minute tutorial, but a full blown 15+ minute tutorial teaching you the basics of the game. I have to take a minute to comment here, because I played through the tutorial recently when I made an EU account. Hearthstone’s tutorial is absolutely awful. It does teach you some mechanics, but it also makes use of a whole bunch of cards that don’t exist and uses an untargetable hero mechanic that’s also curiously absent in the actual game. Tutorials really aren’t supposed to teach you about a different game.

Blizzard also added Adventures, which were supplemental expansions. They happened between expansions, and had significantly fewer cards. But instead of buying packs, you would buy the Adventure itself and play through “wings” (chapters, basically) to unlock the cards. When Adventures first came out, they were quite good. Blizzard made the fights easy enough that all players could complete them for the new cards. However, they also added a Heroic mode that was extremely difficult. Defeating all bosses in the Heroic version earned you a card back for your troubles. This model was perfect, with newer players and those who didn’t care about solo play flying through the easy fights and getting their cards. Meanwhile those who like a challenge and playing solo could stick with the Heroic side. Unfortunately, Blizzard moved away from this, and Heroic mode became incredibly easy, which takes the fun out of it.

At the start of this year, Blizzard announced that there would be no more Adventures, only expansions. This was significant for many reasons, but the one relevant here is that the solo play aspect of the game was disappearing. Blizzard comforted us by stating that they would put some small adventure in with the expansions, but that was all we knew.

Losing Adventures is a big deal. They provided cards and an enjoyable experience to many players. They were a great jumping off point for players who wanted a good return on a few dollars investment. People were pretty sad when they left. In fact, they were so sad that Blizzard decided to reintroduce them. Now if you want the Adventures you have to buy them directly from the Blizzard store, but you can still access them. The problem now is that all the cards in them are Wild, which means they’re no longer a good investment for players who care about Standard.

What’s Next for Hearthstone?

This brings us to the current state of single player modes in Hearthstone. The newest expansion, Knights of the Frozen Throne, brought with it an entirely new way of doing things. Rather than break up the expansions and Adventures, now the expansions come with a solo aspect which is nearly identical to the Adventures of the past. However, rather than getting a bunch of Adventure cards, the rewards vary based on cards from the new expansion. There are also fewer encounters, but that is to be expected.

The major change, between the current mini-Adventure and the past few Adventures, is the difficulty level. The final boss in Knights of the Frozen Throne’s single player mode is one of the best examples of solo play that I’ve seen in any card game. He’s incredibly difficult, and he interacts with every class differently. For example, if you play a Hunter, then the first card he plays does two damage to you for every minion in your deck. If you play Warlock, he destroys your hero if you have any duplicates in your deck. It’s not only an incredibly difficult fight, it forces you to adapt your decks constantly. A lot of challenges in the past have forced players to make new decks to beat them optimally. But this is the first time players have been forced to make at least nine different decks one until now have forced a player to make nine different decks, and still have trouble with them.

Oh, and did I mention that this final boss gives you a pack for beating him once, as well as an alternate hero for beating him with every class? Perfect for giving even experienced players a challenge, but providing an incredibly difficult fight for those who want it. And all of that with only one change for each class. A lot of potential was uncovered here, and I hope Blizzard continues to explore it. For those of you who want a little something extra, here are 19 Easter Eggs in the Lich King fight. 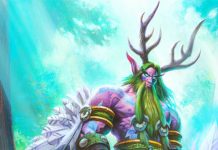