Nerfs are officially coming to Hearthstone. After the past month of Druid dominating ladder, Blizzard finally decided to do something about it. But it’s not just Druid who’s getting some tweaks. Several staple cards have been hit by Blizzard’s nerf hammer, across three classes and one neutral minion. All of the cards touched except one are from the classic card pool, meaning these changes will be relevant forever. And the cards they hit are fairly core across the board.

The Druid nerfs weren’t the ones people were expected. Most people were expecting a nerf to Ultimate Infestation, and hoping that Jades would get a rework. Neither of these happened. Blizzard did, however, nerf Druid as a whole by replacing Innervate with a Counterfeit Coin. That’s right, Innervate now only gives one mana, not two. This is a massive change to virtually every Druid deck in existence. Innervate is the card that fuels Ramp Druid, makes Jade Druid so impressive, and gives Aggro Druid ways to win on turn four. Changing Innervate is such a big change to the class that, honestly, I don’t know what the repercussions will be. I would expect that it will still be played in Ramp Druid and potentially Jade. Aggro will likely drop Innervate entirely. It will definitely make the game slower. 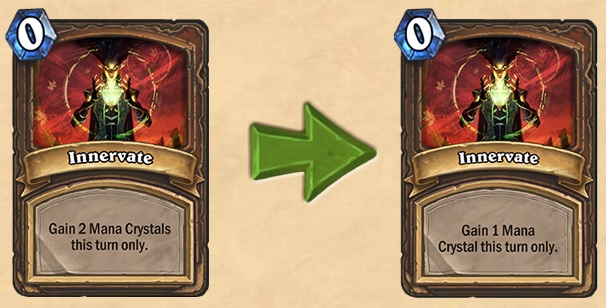 The other change is to Spreading Plague. This card definitely needed it, and Blizzard commented in their notes that it was so strong they considered nerfing it harder. They settled here because of the Innervate nerf at the same time. Spreading Plague has had its mana cost increased by one, making it now cost six mana. By and large, this doesn’t effect that much. There will be some games where the Druid will lose on turn five because they couldn’t get their wall up in time. Mostly, they will just play it slightly differently. It’s a decent nerf that I don’t think will be overly impactful. I won’t expect anyone to cut Spreading Plague if they were already running it.

These changes, particularly the Innervate change, were welcome nerfs to Druid. Will it make the class not tier one? Definitely not. Will it make Druid a little more manageable? Probably. There won’t be as many turn 5/6 Ultimate Infestations, at the very least. Maybe that will be enough to rein the class back a bit. I still would have liked to see a nerf to Ultimate Infestation, but maybe Blizzard is right and the Innervate nerf is enough. Time will tell. But as long as Jade Idol is in Standard, we know Jades will be a problem. Wasted opportunity that they didn’t change it. I suppose they are just waiting for it to rotate out in a few months.

Fiery War Axe, commonly referred to as “Fiery Win Axe” has been a staple of Warrior since the beginning. Much like Innervate, games are won and lost on the back of this card daily. Literally every single Warrior deck that has ever been made has Fiery War Axe in it. The card is just too efficient not to include. Well, all that has changed. Now Fiery War Axe is just a worse version of King’s Defender. You may be asking, “what’s a King’s Defender?” Well, it’s the card that’s now better than Fiery War Axe. After all, they are both 3/2 weapons, and now, they both cost three mana. That’s right, Fiery War Axe had its mana cost increased by one as well.

This is a change that surprises me, because Fiery War Axe isn’t too out of control in Control versions of Warrior. In fact, it’s one of their few lines of defense against aggressive decks. Clearly this nerf was aimed at bringing Pirate Warrior down a few pegs. So I’m a bit surprised they didn’t nerf something like Frothing Berserker. That being said, Fiery War Axe has been the best weapon in the game for a long time. Ever since Spirit Claws was nerfed, it reclaimed the number one spot. Maybe the nerf was a bit cruel to Control Warrior variants, but it wasn’t uncalled for. We’ll see if it still makes an appearance in the future, however, my gut feeling is not before the season reset.

Hex is another iconic Hearthstone card, much like Fiery War Axe. Let’s be honest. Hex has always been too strong. Back when it was first launched, it was understandable why it cost one less mana than Polymorph. You still had to attack it, and it was annoying. Nowadays with Shaman running Maelstrom and lots of tokens, the frog is even less of an issue than a sheep would be. Bringing Hex on par with Polymorph is something I would have liked to see last year, when Shaman dominated the meta.

Now is a weird time for this change, since Shaman is sub-par at best. Blizzard actually comments on this in their explanation of the nerf. They begin the explanation by saying “We’re not making the change to Hex due to a current power-level problem”. They go on to explain that they have their eye on cards that “indirectly work as a silence”. It’s clear that Blizzard isn’t a fan of Silence effects, with all the nerfs in the past. They also moved Sylvanas to the Hall of Fame, making Silence a bit less necessary. Personally, I’m fine with Hex and Polymorph being nerfed into oblivion, playing a ten cost card and having it transform into a tiny harmless animal feels awful. Good riddance, I say.

The final nerf is to Murloc Warleader. Unlike most of the other changes, Blizzard hasn’t touched the mana cost. Instead, now the Warleader only gives other Murlocs two attack, rather than two attack and one health. For the most part, this will just keep Murloc decks from spiraling out of control. Now you’ll still be able to Consecrate them, or Maelstrom Portal some. Murloc decks will still be very strong, they just won’t be as oppressive if they go first with a perfect hand. 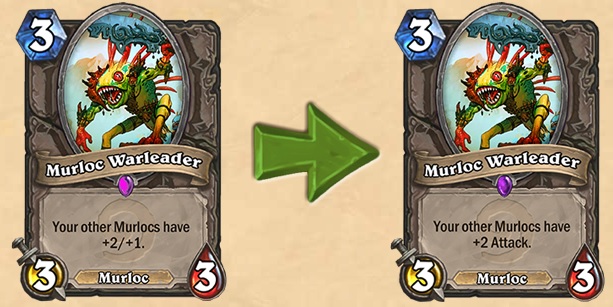 Personally, I like these changes for a different reason. Hearthstone, in my opinion, orders card effects wrong. When you do damage to the entire board, and that damage kills Warleader, the damage is applied, then their maximum health is decreased by one. Effectively, they all take one less damage than they should. For example, imagine you have a Warleader and a 1/1 Murloc in play. The 1/1 Murloc would become a 3/2 because of Warleader. Your opponent Swipes the Warleader, doing four damage to it and one damage to your other minions. The Warleader dies, but the other Murloc, who is now a 1/1 because the buff from Warleader isn’t there anymore, doesn’t die. It has a maximum health of one, and just took one damage, but stays alive due to ordering. I’m glad Warleader is getting nerfed. 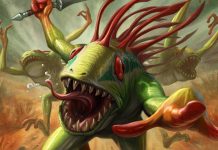