General Stephen Draper -
-6.8k
Path of Exile Shaping Before you start shaping your Path of Exile Atlas, we suggest you read our introduction to the Atlas. Once you have...
Featured image captured in-game.

The Twin-Headed Dragon finally got a makeover. That’s right, Jakiro’s remodel is here.

In addition to being perpetually out-of-meta, Jakiro has had to make do with an ugly, polygon-riddled model with crappy textures.

CyborgMatt uncovered some inklings that Jakiro’s remodel was in progress last month:

A remodel for Jakiro is most likely in the works as he just got a new set of particles that are not for his current existing model. pic.twitter.com/L6vrzDpzxG

Jakiro’s devoted legion of fans have been clamoring for buffs, both in-game and to his image, for years.

This is Jakiro’s old model. Basically, he’s covered in black mud from the neck(s) down. The skin texture on the ice head looks like the water texture in the original Tomb Raider game for PC (yeah, you know what I’m talking about).

Now, this is Outworld Devourer. He gets cool green lightning skin that reminds me of one of those plasma plate Borg recharge station things. OD looks like he belongs in a game with crisp scenery and realistic river textures. Old Jakiro looks like I should be playing him on a CRT monitor while sporting acne and braces.

There are a lot of heroes that could use a little touchup in the texture area, but none quite as much as Jakiro. Over the past few years, Valve has reworked the models for Faceless Void and Zeus, as well as more recently Enigma, Viper, and Slardar. All these guys just got 100% more badass.

But Valve finally took pity on Jakiro players. The new Jakiro is spruced up with textures to rival Winter Wyvern and a much more ferocious appearance.

DotaCinema has a short video clip of the model in action.

I like that you can see the boundary between fire and ice on Jakiro’s back. His face spikes also got a bit of a trim and the color scheme is updated to fit in better with the existing palette. Overall, he actually looks like he belongs in the club with OD and updated Slardar.

Our First Look at Path of Exile’s Synthesis League

Jakiro’s remodel has already made him more popular, too.

However, if you’re planning on downloading a replay with Jakiro in it, be warned: replays with his old model are crashing.

In one update, Valve gave us the long-overdue Juggernaut Arcana and the long-awaited remodel for Jakiro? What’s next, Half-Life 3? 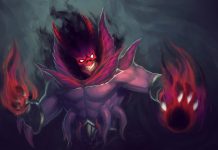