Hitbox disparities are commonly cited as an important issue. If Overwatch expects to be a top eSport, some problems need to be addressed.

Should we have hitbox disparities?

Developers make decisions based off of their game-design philosophy. Nintendo’s Super Smash Brothers explains the idea.

Unexpected hitboxes are inherent to every game. Some Super Smash Brothers Melee hitboxes extend well beyond their character models. Instead of seeing that as a weakness, competitors welcome the feature because it raises the skill ceiling of their game. They know how the hitboxes differ from their visual representations. It gives them an edge.

The opposite approach is to adjust the distance. For example, the newest Smash Brother uses rolling updates. Some of these address hitbox disparities. Game-designers cater to casual players when they make these changes. It makes the game more attractive to new players.

Force Gaming made a video showing that head hitboxes are larger than their corresponding avatars. He calls the concept “hitbox generosity”. You can see how Blizzard simplifies the game to attract new players.

Mercy’s wings don’t take damage. Her wings cause a visual deception. Maybe the wing’s aren’t meant to be solid objects. Even so, new players and competitors both suffer from the annoyance of shooting through Mercy’s wings.

Widowmaker has a skin with feathers on her head. With the feathers in the way, the top of the head is much harder to discern. Landing headshots on the opponent Widowmaker becomes complicated. So, this skin gives you a slight competitive advantage. Some might argue that Blizzard unwillingly introduced pay-to-win elements to the game.

Genji’s ultimate hitbox is counter intuitive. It is said to be shaped like a cone and extends almost twice as far as it is visually represented. Below you can see a demonstration of the problem.

This discussion boils down to opinion.

I don’t think that accurate representation is necessary. Certain tweaks should be made for balance.

The problem is that Blizzard’s largest audience are casual players. In my opinion, hitboxes should be matched to avatars. Oversimplification reduces strategic depth. I think that it’s more fun to watch complicated games.

It seems fair to say that new players are more sensitive. People who take advantage of hitbox viewmodel disparities would play the game anyway. Given that competitive play isn’t significantly affected, Blizzard should seek to accommodate casual players. Rewarding casual players is the best way to popularize a new game.

Previous articleWidowmaker Nerfed: What to Expect on the Battlefield
Next articleOverwatch Quick Play on 20 Tick. What’s the Deal? 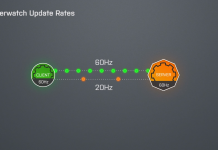