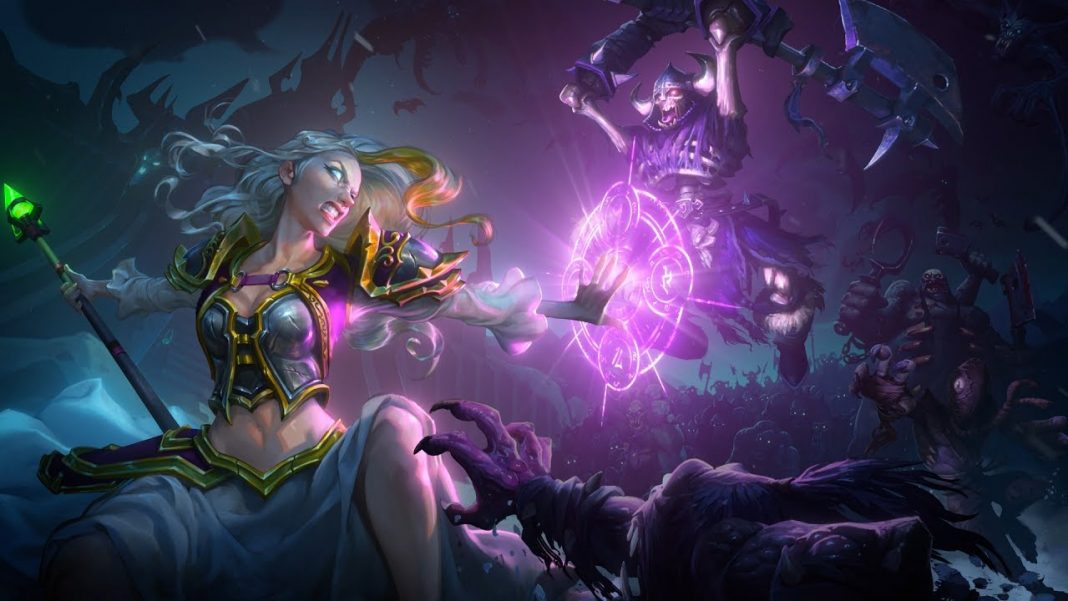 As far as reveals go, we now know all nine Death Knights. We’ve already covered some of them–you can read about them here–and today we’re going to be covering the new Death Knights that we think have the most potential.

The new Warlock Death Knight is Bloodreaver Gul’Dan. He is the only Death Knight that costs ten mana. His Battlecry summons every friendly Demon that died this game. This has lots of potential by itself, and he also changes your hero power to Siphon Life, which deals three damage and hits with Lifesteal. This is most likely the strongest new hero power we’ve seen in the expansion, and it might be the strongest hero power in the game. Juraxxus is the only hero power that can compete, and that’s also a Warlock card! 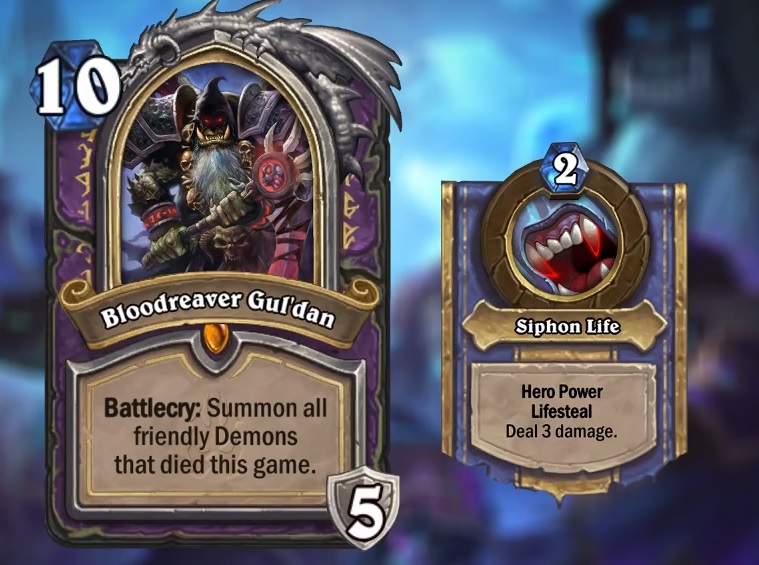 After theorycrafting, most people agree that Bloodreaver Gul’Dan is insane, but most of the card’s power is only unleashed in Wild format games. The issue in Standard is Reno is missing. This Death Knight rounds out a Reno Demonlock deck perfectly. In Standard, the Demons just aren’t very strong. Ideally you’ll want a Taunt or Charge minion to come into play with this Gul’Dan. But the strongest Taunt and Charge minions require you to lose mana crystals or discard cards. Both effects get you further from or potentially losing Gul’Dan. Unless you can rely on using Krul, which realistically you can’t, the Battlecry aspect of Gul’Dan’s Death Knight is fairly neutered. You can still easily fill a board, but you’ll be hard pressed to do that on turn ten and not just die in response.

All that said, if you can get this Death Knight in play he is insane. The hero power alone is nearly game winning. Three damage and healing for three every turn, for two mana? Three damage alone is worth two mana and an actual card. Healing for three on top of it is beyond insane. This is easily better than the deal eight random damage hero power, in my opinion, since you can target it and it allows for defense as well. Even with Demons being as lackluster as they are, I can’t imagine this card not seeing play, it is just too strong.

The new Priest Death Knight is Shadowreaper Anduin. He costs eight mana, and when he comes into play he destroys all minions with five or more attack. His new hero power becomes Voidform. It is similar to Shadowform, unfortunately. Deal two damage, after you play a card, refresh this. This Death Knight is pretty tame compared to many of the others, but there are some distinct possibilities with him. 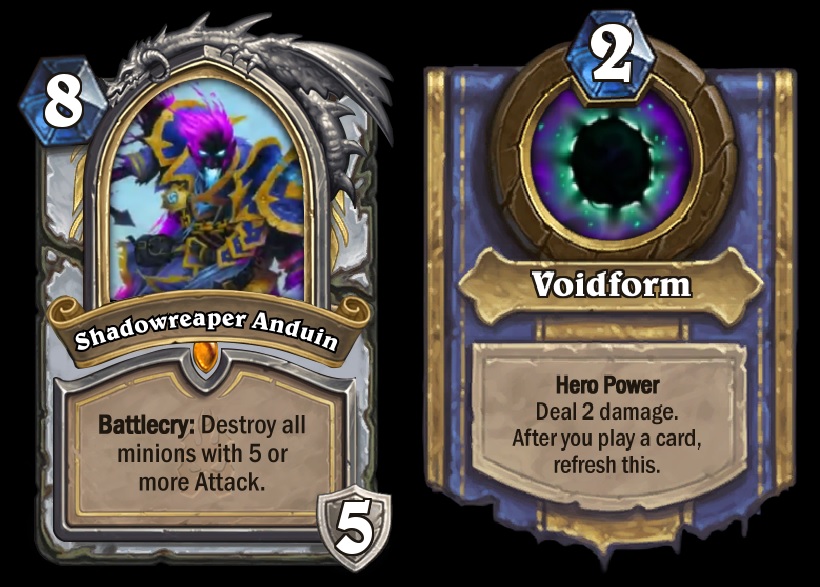 There are a few incredible synergies with this card. Raza the Unchained is the most obvious one. Play him and suddenly, you can deal two damage once per turn, with an additional two every time you play any card. And Priest can create a whole lot of cards. This is a very basic interaction, but that doesn’t mean it’s not an incredibly strong one. There were a couple decks last expansion that made use of Auctionmaster Beardo to refresh hero powers, alongside Spawn of Shadows for extra damage. Now you don’t have to play Auctionmaster at all, and your base damage starts higher.

Which of course brings us to the second incredible synergy, which is Spawn of Shadows. Imagine a game where you’ve played Raza the Unchained and Shadowreaper Anduin. Hit your opponent in the face, then play Spawn of Shadows and hit them again. You’ve now done ten damage for four mana. And each card you play after that does another seven, for free, as long as you can take the four damage yourself, which can easily be mitigated with cards like Binding Heal. A few low cost cards and this is an easy lethal combo. 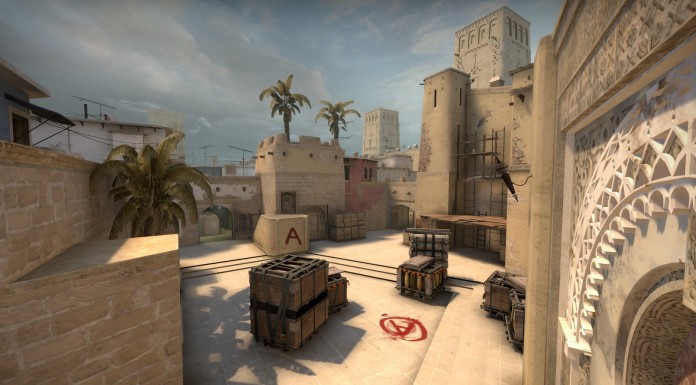 The last synergy is Lyra the Sunshard, and potentially a Radiant Elemental. As it turns out, Lyra is a perfect way to play a whole bunch of really cheap spells in a row. If you can play Raza then Lyra plus Radiant Elemental, combo-ing seven more spells is actually fairly easy. If you can pull off Lyra, Radiant, and seven spells, that’s 30 damage with hero power alone. Shadowreaper Anduin is one of the most boring Death Knight cards, by himself, in my opinion. But the combo potentials that he enables are insane, and I’m quire sure he will see play, at the very least in fun decks.

The new Paladin Death Knight is Uther of the Ebon Blade. He costs nine mana and when he comes into play he brings a 5/3 weapon with Lifesteal with him. His hero power change is…interesting. The Four Horsemen summons a 2/2 Horseman, and if you control four of the Horsemen at the same time, you destroy the enemy hero. Instantaneous win. That’s a pretty strong effect, go figure. But actually getting all four horsemen out will really take some doing. 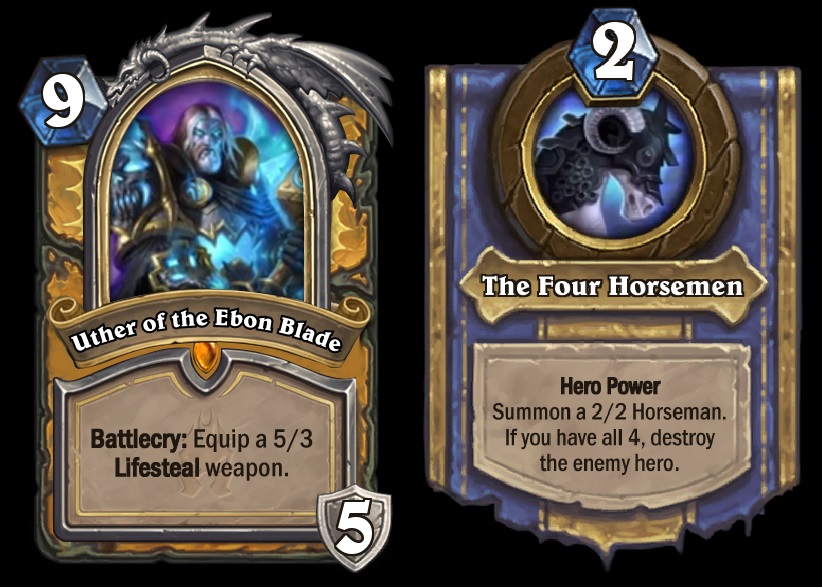 I’ve been thinking about this for a while, and I don’t really see a way to make Uther of the Ebon Blade work in Standard. Auctionmaster Beardo can get maybe three out if you have a coin. Bouncing them to your hand is way too slow, and they summon randomly like Shaman totems, so it’s ineffective. All this after you’ve stalled enough to actually play a nine mana stall more hero. Potentially this could just be used to have your hero power make 2/2s, but that’s just… bad. Justicar was rarely run in Paladin for a very similar effect, and the Horsemen don’t interact as Silverhand Recruits. So it’s not overly worth it, unless you’re in Arena.

However, people have worked out a decent-ish strategy for this in Wild. After you’ve played Uther, this is a two turn combo. Play Garrison Commander and use your hero power twice. The Horsemen are guaranteed to not repeat if they are in play, so you’ll get two different ones. Bounce them both with two Youthful Brewmasters, for a total of 10 mana. Next turn play the two Horsemen from your hand so you don’t get them again. Then play the other Garrison Commander and hero power twice more. It takes four cards and two turns, but your opponent is forced to kill you between the turns. Since it’s an auto win, there’s no playing around the combo, if you’re not threatening lethal.

Honestly I don’t see Uther seeing much play outside of meme decks. That being said, his effect was too interesting not to include. And honestly, a nine mana 5/3 weapon with Lifesteal, not to mention a stronger hero power, and five armor isn’t the worst thing in the world, especially in Arena. 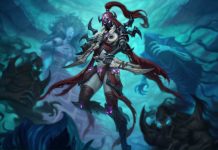