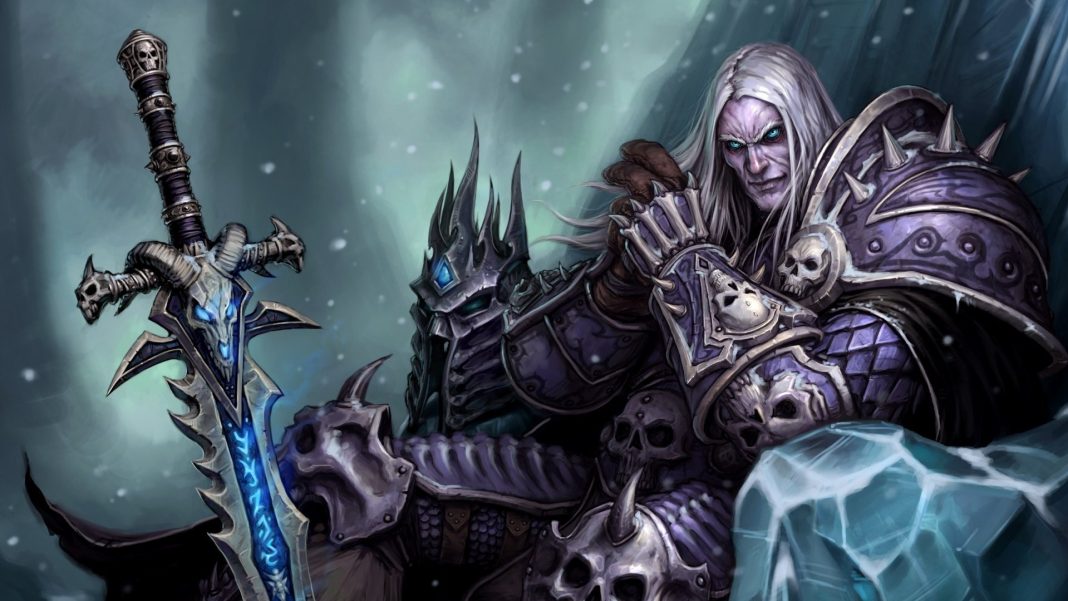 In the past few weeks, we’ve had our first Hearthstone cards reveals for Knights of the Frozen Throne. Now that the official reveal season has started, it’s time to start covering the cards for real. With the first batch of reveals we didn’t learn too much, except how Death Knights will work, but that was pretty awesome. We also have another legendary to show, which is always cool.

Prince Keleseth has a very interesting ability, and I’m willing to bet he will never see play. He is a two mana 2/2 that says if you have no other cards in your deck that cost two mana, all minions in your deck get +1/+1. While giving all minions in your deck +1/+1 is cool, losing the game because you lost tempo isn’t. The real issue with him is that he specifies ‘cards,’ and not ‘minions.’ If his ability triggered when you had no other two mana minions, it would definitely see play. Just have a spell based deck with a bunch of high drops. Control Warrior–old Control Warrior–would have loved this guy. 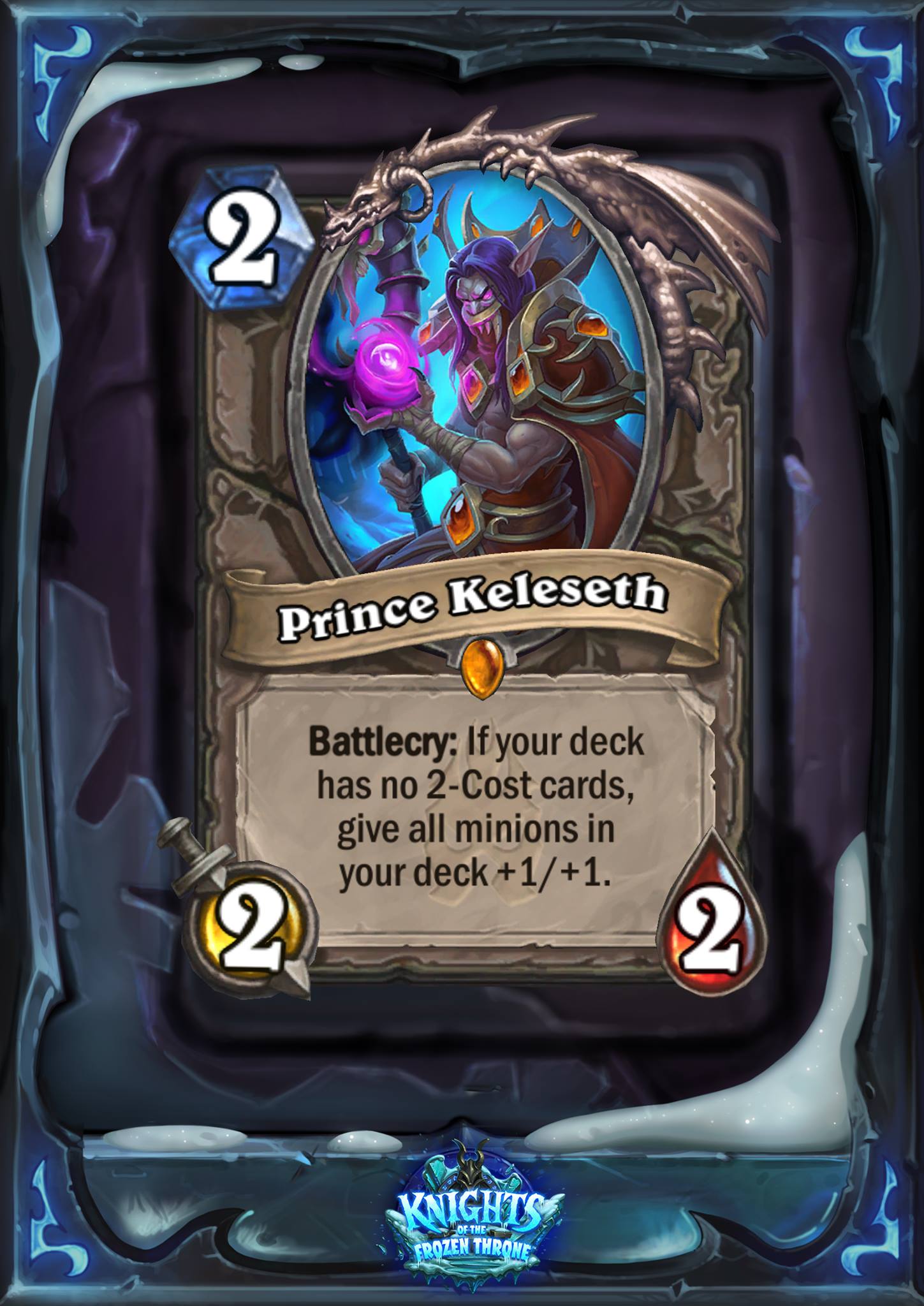 Unfortunately, since it says cards, Control Warrior also couldn’t play Execute and Prince Kaleseth. Mage can’t play Frostbolt, Priest can’t play Shadow Word: Pain. Prince Kaleseth is only good in slower decks, since you can’t have any other two drops. Except all of those decks have cards in the two slot anyway. The two mana slot is easily the most important in the game. Having only one two drop in your deck is a death sentence. Maybe if Prince Kaleseth started in your opening hand he would be good. Even then, I’m not entirely sure he would see play. Too many important spells to lose, even if you were guaranteed toget him out on the board early.

The only time I see the Prince seeing play is from cards that create legendaries. For example, in Wild, the Golden Monkey could create him. Then you’d likely have no other two mana cards left in your deck, and you could give your legendaries +1/+1. Sort of. Except that it only works on the ones still in your deck, which there usually aren’t many. Honestly I’m not really seeing an upside here. This card is just a worse Mistcaller. A worse version of a card that never sees play. Not sure what would have to change for the Prince to see play, but he’s awful.

Luckily, the Hunter’s Death Knight card is better than Prince Kaleseth. Not likely to be playable, but definitely an improvement. More importantly, it gives us insight into how the future Death Knight cards might function. But regardless, the Hunter’s Death Knight is called Deathstalker Rexxar. It costs six mana, and when it comes into play, it gives your hero five armor and deals two damage to all enemy minions. Plus it changes your hero power, and makes them look all badass and undead. 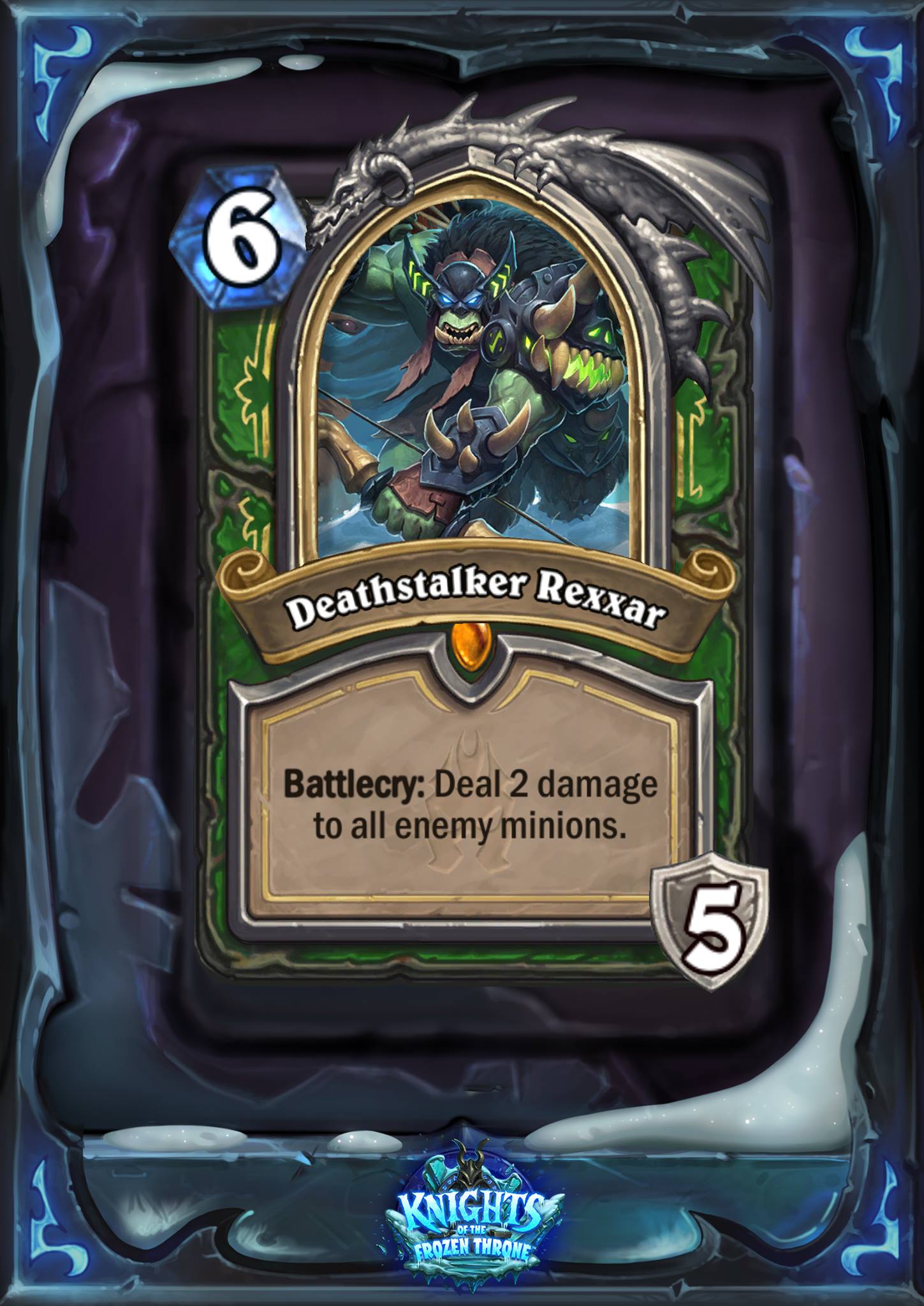 The new hero power, obviously, is the interesting part. Rexxar’s new hero power is ‘Build-A-Beast.’ Two mana, craft a custom Zombeast. The wording Zombeast there is irrelevant, since it’s just flavor to make it tie into the undead theme. To craft a beast, three options are presented to you, exactly like Discover. You choose one, then three more are presented. Choose again, and the two beasts you have chosen are combined. To combine them, it literally mashes all their numbers and text together. The new mana cost is a combination of the two mana costs, the new attack and health are both cards combined. The creation will have both minion’s abilities as well.

The real issue with this card is speed, of course. If the meta is the same speed as the current one, or faster, this Death Knight is just too slow. The board clear does help, but it’s not enough if you’re about to lose. And the Hero Power won’t do anything to help you the next turn either, if you’re floundering. But if the meta slows down at all, this Death Knight can be insane. Particularly if other defensive Hunter cards are released. The more I think about it the more I want Deathstalker Rexxar to become a viable deck choice. There are just so many options!

Obviously the creation ability leads to a ton of really interesting possibilities. One thing to note is that your creations cannot exceed ten mana, and none of the options will be above five mana. This still allows a lot of potential, although it does remove some of the massive plays. Also, since you are discovering, you can only have choices from the Hunter and Neutral classes. Unfortunately, there won’t be any Druid shenanigans. Not yet, at least.

I think Stonetusk Boar is actually one of the best possibilities to get. You can combine it with Poison beasts for a cheap kill spell. Or with high stat minions for quick plays on board. Hell, combine it with Duskboar and you have a three mana 5/2 with Charge. Seems pretty good! Or, if you’re really into hitting hard, you can put it with Bittertide Hydra. Six mana 9/9 Charge? Move over King Krush! Same goes for King Mukla. Who cares if your opponent gets two bananas? You just hit them in the face for 6! Stonetusk Boar will probably be my pick every time I see him first.

Vicious Fledgeling is another really interesting choice. Combine it with a Charge minion for the fast attack and hope for Windfury. Or combine it with a Stealth minion to keep it in play until it can attack. Everyone’s least favourite Arena card can potentially be making a play for the big leagues!

But the best card of all, the truly massive pick is… Angry Chicken. That’s right, you can have a high health minion with Enrage +5 Attack for only one extra mana. That’s only half a joke. Oasis Snapjaw becomes a five mana 3/8 with Enrage +5. Which is obviously pretty insane. There are also a handful of high health Taunt minions that could benefit as well.

There are a ton of options, and I’m looking forward for the rest of the Knights of the Frozen Throne reveals! 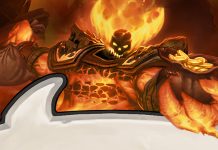