You’ve probably heard that there’s a nerf coming to Hearthstone. I know, big news! Our bi-yearly nerf! This time, it’s Quest Rogue decks that are on the receiving end of Blizzard’s nerf hammer. As far as nerfs go, this seems like the least necessary, but that might bode well for our chances of seeing more regular balance patches in the future. We’ve got more good news for Hearthstone players: Wild packs are going to be available for purchase again. Let’s dive in.

Caverns Below is the Rogue Quest card. It activates once you’ve played a card with the same name four times. Once activated, it turns all your minions into 5/5s, permanently, including the ones in your hand and deck. Obviously this effect is extremely powerful, particularly if combined with low cost minions. But how reliable is it? 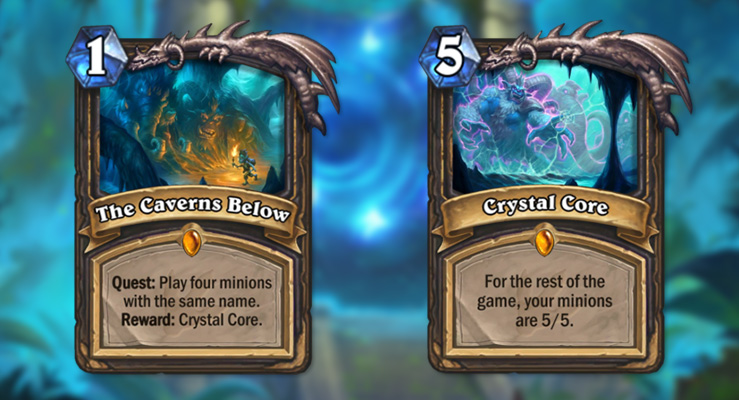 Turns out it’s an incredibly reliable setup. Making use of Youthful Brewmaster, Shadowstep, and Gadgetzan Ferryman allowed players to bounce cards extremely quickly with relative ease. Throw in Swashburgler and Novice Engineer for value bounces, and you’ve got a pretty nice deck on your hands. After a while, Fire Fly and Igneous Elemental were added, since the 1/2 elemental turned out to be so good to bounce. Long story short, it ended up that players were reliably finishing the quest by turn five. Then they would play Crystal Core on turn five or six, or even use Preparation to get it out for only two mana. After this, they would use a bunch of one mana 5/5 chargers to finish the game.

Was Rogue’s Quest unbeatable? No, not at all. Because their first three to five turns were spent bouncing their own cards, the deck was incredibly vulnerable to other aggressive decks. Additionally, if you get off to a bad start with Rogue’s Quest deck, it would usually get steamrolled by most other decks. Even control decks that were able to put up their defences can usually handle one 5/5 a turn if the Rogue is stuck top decking. The problem mostly boiled down to inconsistency. A turn three quest finish with Prep in hand is a massive difference from a turn five finish. In other words, is it reliable? Yes. But it’s definitely not consistent.

As I said, this is arguably one of the least warranted nerfs in the history of Hearthstone’s nerfs. Sure, Quest Rogue can be extremely annoying, and when it works it’s very strong. But based on Blizzard’s history, decks usually have to be running 60%+ win rates in tournaments before any nerfs come through. At the same time, I’m really happy about the design choice in a more general sense, since it shows Blizzard is getting a little bit less stingy with nerfs. My optimism is cautious, but hopefully we’ll see balance patches getting shipped on a more frequent basis moving forward.

So what changed? Now instead of needing to play four minions with the same name, you need to play five. Is this a big deal? Yes. This is a massive change, and I’d be shocked if the card sees much play after this. In its pre-nerf state, the deck is good, but that’s because it wins early by using a certain collection of specific cards. Now, one of those specific cards also needs to be put towards another bounce. In the best case scenario, players lose 5 damage since they can’t charge another Boar in–that bounce needs to be used for the quest. Worst case scenario? They never get to finish the quest at all. We won’t be seeing any turn three quests, and few turn fives. This almost entirely destroys the viability of Rogue’s Quest against aggressive decks and, it’s worth noting, provides a nice buff to control decks.

I’m not disappointed with the change, even if it is arguably unwarranted. The real issue with the Rogue Quest deck was that, ultimately, your success or failure was determined by luck. Either you drew the cards you needed in the first few draws, or you didn’t. If Hearthstone doesn’t to be a coin flip simulator, then cards that rely on RNG and luck need to get the boot. There wasn’t any planning or real skill involved in Rogue’s Quest, and such a low skill deck should never be at the top of any tier list. I’m assuming this is the reason Blizzard chose to nerf it as well. The Quest has a neat concept behind it, but I’m not going to be upset if I don’t see it at high ranks anymore.

Wild Cards Return to the Store

When Standard launched, Blizzard decided to remove Wild cards from the store. This means you were unable to buy packs from any set that wasn’t in the current Standard rotation. You were also unable to purchase adventures that were out of Standard.

Understandably, players were upset. Crafting commons and rares for dust is extremely expensive and ineffective, so by removing these packs from the store, it effectively upped the price of Wild cards by quite a bit. This, obviously, made it difficult for people to play Wild if they didn’t already have the cards.

This week, Blizzard announced that Wild packs will be returning to Blizzard’s digital storefront. As of today, they’ve only provided us with a link to the store on their site, which means that right now it appears (but remains unconfirmed) that Wild packs will only be available for purchase using real-world money. It’s a big step in the right direction. This decision was likely made because of all the talk about making Wild great this year. We haven’t seen any real attempts to make Wild a more attractive format, but Blizzard talked a decent amount about improving the format. Many people assumed that this meant official tournaments, and I’ve got my fingers crossed that letting players purchase Wild packs again is only the first step.

In case you’re wondering, Blizzard still hasn’t provided us with information about pricing. I’m assuming this means they’ll be coming back at the same price as they were on release — if you want to buy Wild packs, you can anticipate shelling out $3 (USD) for one pack, $70 for 60 packs, and $20 for an expansion. All in USD, as that is what the shop prices are in, as seen here. Hopefully we will see them in game for gold as well, but that is currently unreleased information. We’ll keep you posted. 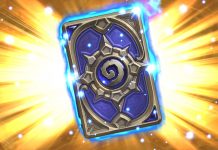 How Does Hearthstone's Pity Timer Work?