Dota 2 Eugene Torubalko -
-441
What to Expect for the Spring 2021 Dota Plus Update Dota Plus is a premium monthly subscription service in Dota 2. It comes with many...
The Rain Man will no longer be streaming League of Legends

Less than half an hour after a reddit post calling out The Rain Man’s toxicity on stream, he was swiftly banned on his main League of Legends account, followed by a cumulative ban on all of his other existing accounts. Before the matter could escalate into a Tyler1 situation, Riot blew out any possible flames. But his name wasn’t always renowned for toxicity; in fact, it had hardly been mentioned of late. That being said, there was a time when The Rain Man meant much more to the League community.

Before names like Darshan “Darshan” Upadhyaha, Seong “Huni” Hoon Heo, and Jang “Looper” Hyeong-seok ruled the top lane, we had incredible carries such as Yoon “MakNooN” Ha-woon and Morten “Zorozero” Rosenquist tantalizing fans with their unrelenting aggression. But even before that, professional League of Legends, still in its infancy, saw the true old guard; of those, two players stood out in the top lane more than any: George “HotshotGG” Georgallidis and Christian “The Rain Man” Kahmann (TRM).

These two retirees, while similar in perception at their peak, took quite differing paths after their primes. Hotshot was known for his disgusting split-pushing Nidalee, always applying a ridiculous amount of pressure while being nearly invincible due to his slippery mechanics. After dominating the top lane for a couple of years, Georgallidis transitioned into the jungle, then a short stint in the midlane, before finally stepping back into a management role. Counter Logic Gaming continues to build its gaming empire with HotshotGG at the helm, expanding into CS:GO, Super Smash Bros’ Melee, and other titles.

The Rain Man had a similar champion mastery, except using Teemo instead. Choosing an equally, if not more, annoying character, he also learned to split-push extremely effectively, playing as part of the original Team SoloMid roster that competed in a slew of international tournaments, even capturing first place at MLG Providence in 2011. Neither of these players were only one-trick-ponies though. Contrarily, both were able to play most of the viable roster with fair proficiency.

Season 2 brought a divide between TRM and the rest of the TSM team, but the issue was not about his skill. The former rank 1 player could not find value in the practice regime that owner and captain Andy “Reginald” Dinh wanted to instill. Beyond a disconnect in personalities, differing core visions and values separated The Rain Man from the rest of his squad.

After IEM Hanover in 2012, the team was distraught by their losses to Curse Gaming, Moscow 5, and SK Gaming. The era of proper strategy and communication was yet to come over North American League of Legends, and The Rain Man was one of the last players to prevent its arrival. He believed in the primacy of individual skill to carry games; he was a solo queue player that landed on a professional team, and his attitude never changed. Ironically, players’ refusal to play solo queue in the years following would lead to team departures from other players, due to lack of mechanical skill.

But Christian did not have the same sustainable career that Hotshot managed to forge himself after retiring as a player. His departure from TSM was riddled with controversy and he was never able to return to the professional scene. His one legitimate bid to make it back into the LCS was ended when his jungler XJ9 was permanently banned from the game due to his antics and arguably inhumane treatment of friends.

He continued streaming after leaving the ‘Baylife’ squad, but as his relevance to the pro scene slowly dissipated, his numbers began to dwindle. From averaging over 15,000 concurrent viewers on Twitch.tv, to dropping below a hundred in 2016, was definitely a huge step down for the top laner.

This is the End

His skill, which once marked the paragon of League of Legends, had dulled to the point where he struggled to even make it into the Diamond leagues. His personality was not as endearing as other retirees who were able to carve out a unique social space. His brash and carefree character had translated into arrogance and toxicity, before finally resulting in his banning from the game and community.

It is sad to see one of the longtime veterans who competed in the first League of Legends World Championship at Dreamhack fall so far from grace. When success stories from cherished superstars like Yiliang “Doublelift” Peng and Bora “Yellowstar” Kim dominate the headlines, it’s tough to swallow the irrelevance that some players end up having to the scene. Whereas some personal brands have seen incredible success, others have been completely dissolved. With this action, Riot reminds us again that there is no place for toxicity in a community that is attempting to grow into the mainstream. When the last ditch attempts come to revive a career, they are often washed away; The Rain Main has finally fallen. 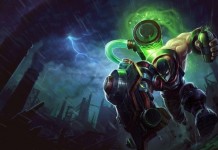