Dota 2 Eugene Torubalko -
-441
What to Expect for the Spring 2021 Dota Plus Update Dota Plus is a premium monthly subscription service in Dota 2. It comes with many...
By hitting the free agent market a bit late, kaSing has just a few weeks to hop onto a roster in time for the 2017 EU LCS Spring Split.

Following their inaugural season in the European League of Legends Championship Series, Team Vitality has cut ties with support player Raymond “KaSing” Tsang in favor of Ha “Hachani” Seung-chan, formerly of KT Rolster. The move was reported by L’Equipe on December 1.

“After a difficult Summer Split however, we decided to explore different options for the upcoming 2017 season,” they wrote in their press release. “Despite being aware of the situation, kaSing has remained exemplary throughout the entire offseason process, driven by the professionalism he has accustomed us to during our year of collaboration.”

kaSing was one of the first to ink a deal with Vitality as they entered the LCS space a year ago, leading the team to the first round of the Spring Spit playoffs before dropping to seventh in this Summer. However, when the team signed AD carry Pierre “Steelback” Medjaldi in September, the pair often shared their experience duo queueing with one another on social media, giving the impression the two would play together in 2017.

The team, however, had other plans, announcing Hachani’s acquisition on Saturday as part of the organization’s second revamp in less than a year. Following their playoff appearance in the spring, the team tried swapping incumbents jungler Ilyas “Shook” Hartsema and AD carry Petter “Hjärnan” Freyschuss for Kim “Mightybear” Min-su and Park “Police” Hyeong-gi, which seemingly backfired.

Hachani joins Steelback in the bottom lane, as well as top laner Lucas “Cabochard” Simon-Meslet and Erlend “Nukeduck” Holm, who were both recently confirmed to be staying with Vitality. 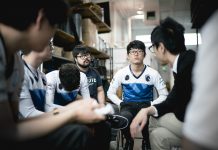