General Stephen Draper -
-6.8k
Path of Exile Shaping Before you start shaping your Path of Exile Atlas, we suggest you read our introduction to the Atlas. Once you have...
OPL caster team. Photo via Riot Games.

Everyone has biases – probably the most prominent emergence of this was in Montecristo’s Worlds adventures where he fervently supported the ‘Korean Hype Train‘, and yet, I didn’t really take too much issue with his actual casting, despite the pregame banter. The International Wildcard Allstars have shown me a completely different story though – one that has constantly irked me: the casters are racist.

Before we go any further, just watch this video.

Now I implore you to ask a couple of questions, just for a start:

From my own anecdote, I’ve felt that the casting is heavily skewed towards non-Asian regions, especially non-Korean regions. In this showmatch between OPL and GPL, the majority of casting was done from the POV of Oceania. Even though Monte was heavily biased in his pregame at Worlds, he tended to present a fairly balanced casting style, focused on individual actions rather than players. One nuance to notice is his mixed and deliberate use of player names and champion names.

Jump to 13:00 in, and this could not be more evident. Actually, watch the entire Carbon vs QTV match, and you’ll definitely see this emerge. But even throughout all of the series (aside from the one-for-all fiestas), these casters strongly showed their racist bias against Southeast Asia. A similar pattern has definitely emerged even at the non-fringe events, like Worlds. The LMS and LPL tend to be casted from an adversarial perspective, whereas NA and EU tend to receive heavy favor.

Does this hold water? Does it even matter?

The first question is simply a starting point for a rigorous ‘discourse analysis’ and/or ‘content analysis’ to follow. A pseudo-quantitative analysis counting the percentage of time spent from the POV of each player (kind of like possession time in soccer/futbol) would probably be the most interesting and illuminating study to begin with.

Secondly, yes, it does matter. If I can even noticed these biases while I’m trying to finish a series of research papers and proposals, the casting has proven to be an inhibition to game digestion, rather than a complement to the action. It’s entirely possible that I’m completely biased and wrong, but I don’t really watch the GPL, nor care for any of its players.

I actually might look into conducting a rigorous research paper on this topic, but I’m not sure of the value outside of the superficial private sector value, which really doesn’t interest me that much. However, Riot and/or other companies may want to consider who they are employing to take their casting positions.

One of the biggest social media complaints about local NBA broadcasts is the ridiculous biases of casters from some teams: Boston, I’m looking at you. When it verges on racist tendencies though, the issue becomes more salient, and with greater implications for equity, equality, and opportunity.

If Riot wants to own every aspect of its game, including the broadcast, they better make sure they’ve got a balanced and non-discriminatory team. When the wildcard casters take the stage, the biases speak louder than the words themselves. 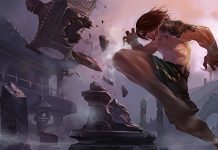 And This Patch's Most Popular Champion Is...