General Stephen Draper -
-6.8k
Path of Exile Shaping Before you start shaping your Path of Exile Atlas, we suggest you read our introduction to the Atlas. Once you have...
Featured image via wallpaperplay.com

Ivern has exploded as a powerful jungle pick during the third week of the LCS. After being picked eight times in the first two weeks of EU play, this supportive jungler became 100% pick ban in the EU LCS this weekend. NA has been a little slower to adopt the pick, with the first lock-ins happening only in week three. Ivern’s popularity can be explained in part by patch 7.2, which caused buffs to spawn three seconds later and laners to consequently be stingier with their leashes. The “Green Father” doesn’t need leashes, and he doesn’t suffer from this change whatsoever.

Why are people locking in Ivern?

Rather than thrashing you for kills like a Kha’Zix or Rengar, Ivern uses his shields, heals, and crowd control to provide utility for his team and nullify enemy aggression. He’s a horrendous champion to engage onto; Daisy [R] acts an additional frontliner and knock-up bot, while Rootcaller [Q] is much easier to land on advancing targets. Rootcaller can be used to get picks and provide up to TWO seconds of root duration, thus allowing a Maokai or Shen a free gap-close and additional guaranteed CC. Ivern is not a true tank, but his spells are such long range that he can be useful even after he limps out of a fight.

If you noticed a lot of Daisy vs Kha’Zix games this weekend, it wasn’t just a coincidence. Ivern is an acceptable pick into this matchup because Daisy removes isolation from a Kha’Zix 1v1. Still, Kha’Zix can punish Ivern early if he catches him waiting for his long cooldowns.

Ivern has fantastic neutral objective control. Familiarize yourself with his Friend of the Forest passive at the Lol Wiki if you need to, but basically, Ivern can three buff enemy junglers if he “groves” his starting buff, runs to to the enemy buff and one-shots it with smite, then returns to his jungle to collect his matured grove(s), and his finally his third buff (if it hasn’t been counter-stolen already). It’s a risky play for sure – a gangly level one tree ambling into darkness to channel in front of a camp – but very high reward. You better not miss your root if you get caught!

The ability to create your own brush has a multitude of uses, but the strongest use of Brushmaker [W] is to place a bush directly under Dragon or Baron and rush the objective. If you use your control wards correctly, the enemy will have to facecheck the brush to check the monster’s health, and facechecking is never a strong play. Smitefights are a lot harder to win when you have to guess when to go in. Imagine facechecking one of Ivern’s Dragon brushes but discovering you went in way too soon. Check out how TSM used Ivern’s protection and Azir’s zoning to control late game objectives.

The time you save by not fighting camps gives you more time to be on the map warding and interacting with other players. Unlike most Junglers, Ivern can rush Redemption and contribute to fights from extreme range. His Triggerseed [E] and Locket shields can also ensure high kill participation, similar to how Janna picks up a lot of “gimme” assists with her shields.

Ivern doesn’t have carry-level damage and isn’t a mechanically demanding champion. Instead, finesse and strategy will win you games on Ivern. Junglers with strong macro sense will use Friend of the Forest to farm efficiently and look for opportunities to interact with their team and opponents. I posit that good players should use the Ivern pick to force interactions early and often with bad players who will inevitably make more mistakes than them.

Speaking of which, why hasn’t Korea picked Ivern yet? 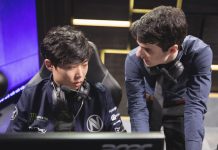