Reviews Elizabeth DiCesare -
-314
ROCCAT Vulcan 120 AIMO Are you in the market for a new gaming keyboard? If so, I recommend checking out the ROCCAT Vulcan 120...
(Featured image via Blizzard.)

Cubelock is the newest variant of Warlock, and it revolves around two new cards, one of which the deck gets its name from. Carnivorous Cube has a lot of potential, but it’s incredibly powerful when it’s consuming a massive Demon that creates more Demons. That’s right, the other key component of this Hearthstone deck is Voidlord. The interactions between these two cards are strong enough to base an entire deck around.

This is a strong Cubelock decklist, courtesy of TempoStorm, and the only things I would consider changing would be the Mountain Giants and Prince Taldaram. They don’t really suit the theme of the deck, but at the same time, they’re solid cards, so feel free to keep them. If you add cards, however, be sure not to add any other Demons, because you want to be using Recruit to pull Doomguards and Voidlords exclusively.

The playstyle of this Hearthstone deck is similar to other slow control decks, and has a decent amount in common with the Big Priest archetype that’s been in vogue lately.

You postpone the game and draw as many cards as possible since you want to get Possessed Lackey and Skull of the Man’ari quickly. Ideally, you’ll have one of these cards by turn five and will be able to immediately play it and begin your shenanigans. 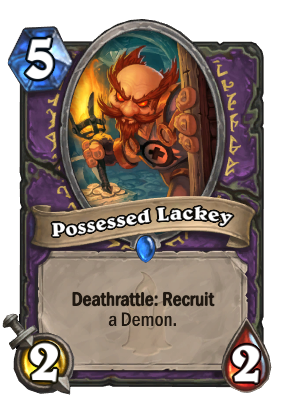 If you have Possessed Lackey by turn five, play it, and make sure he dies quickly. If you have Skull of Man’ari instead, you want to save the card for when you know it’s only going to hit either Doomguard or Voidlord. Because your deck only has those two Demons, when Possessed Lackey dies, he will bring one of them into play.

This is where the real fun starts. Both Doomguard and Voidlord are incredibly powerful minions, especially when you don’t have to spend any of your mana to summon them. The icing on the cake is that the Battlecry doesn’t trigger for Doomguard with Recruit, which means you don’t have to discard any cards.

In most cases, you’ll want to follow this up with one of your Carnivorous Cubes. Once you’ve played your Cube and targeted a friendly Demon—ideally one of your Voidlords—you have two options. 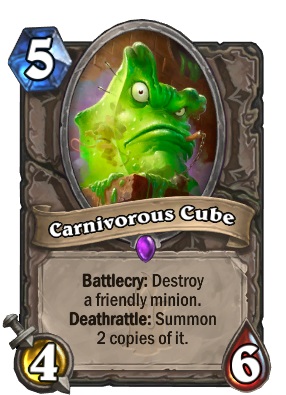 If you’re in a comfortable position and the opponent’s deck doesn’t have any silence effects (this includes Hex and Polymorph), then just play normally, get your Cube killed off, and summon two copies of the Demon you destroyed with its Battlecry.

If your opponent does have silence effects to remove the Cube’s Deathrattle or you’re in a bad spot, kill off the Cube as soon as possible.

This is where Dark Pact comes in, since it’s a completely viable move to target your own Cube with Dark Pact on the same turn you summoned it.

Here’s an example of how this can play out. Let’s say you have a Voidlord in play, then you bring out your Cube and Dark Pact it immediately. In this situation, you will have played two cards for six mana and end up with two Voidlords and three Voidwalkers on the board. This is a near impenetrable wall, especially since the Voidlords will create even more Voidwalkers when they die. 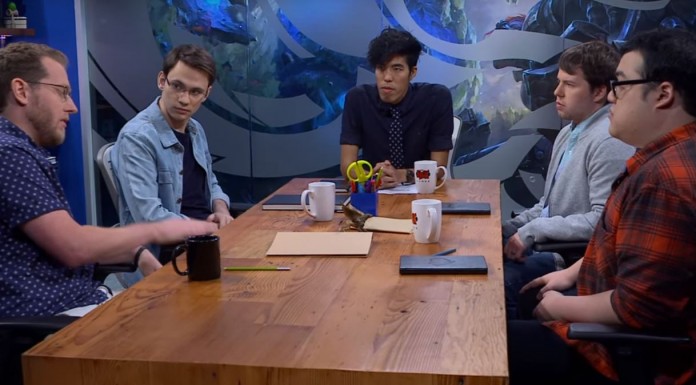 If your opponent somehow manages to break through all of that nonsense, you hit them with Bloodreaver Gul’dan. Boom, every Demon that died this game comes back into play. (You can only bring back up to seven minions with Bloodreaver Gul’dan.) Be aware that the 1/3 Voidwalkers are Demons, so you might potentially end up with more of them than you would have liked, but that’s a risk you’re probably okay taking. Bringing back seven 1/3 Taunt minions isn’t the worst thing in the world.

Cubelock is quite strong against most aggressive decks, and this is where the deck truly shines. If you create a million walls, then the aggro decks just can’t push through for the win. The best decks in the current Hearthstone meta include Tempo Rogue and Aggro Paladin, so this is a very important matchup to keep in mind. 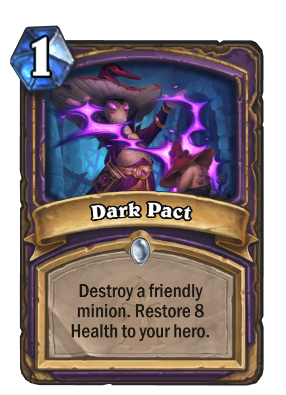 You’d have to get a pretty bad hand in order to not survive by using Defile and Hellfire, and you’ve got some smaller minions you can use to stall. Even Dark Pact can be used for a burst of health in bad situations.

It’s possible to be overrun by aggro decks if you end up with a hand full of high cost cards, but that’s a risk you always take with these sorts of decks. For the most part, aggro decks aren’t a huge problem.

However, control decks are a different story. Cubelock puts up a great wall, but unless you hit a perfect Doomguard into Cube, your aggressive potential isn’t incredibly high.

Other slow decks have far more defined win conditions, and enough time to implement them against Cubelock. Jade Druid, Exodia Mage, and, most importantly, Priest decks of all kinds are incredibly hard matchups for Cubelock.

Priest has enough removal and stall to play their massive value cards, and they’ll slowly chip away at you over the course of an incredibly long game. The Big Priest deck is similar to Cubelock, and relies on playing big minions early and reviving them when necessary. But Priest’s minions are undeniably stronger in drawn out games, and Cubelock simply can’t compete.

When you’re playing against control decks, Cubelock’s biggest weakness is that you don’t have the potential to go aggressive. Despite the interesting interactions that make Cubelock work, the playstyle of the deck is remarkably straightforward. Play big minions early, create lots of them, and laugh at your opponent from behind the wall. It’s a fun deck, but it leaves something to be desired in terms of dynamic gameplay. When you’re forced to try and adapt in order to beat other control decks, you don’t have much in the way of backup plans.

If you’re frustrated with all the aggro decks on ladder, play Cubelock and wreck them hard. But if you’re frustrated with Priest, steer far clear of Cubelock, and build an Aggro Paladin deck instead. If you like big Demons, reviving minions over and over again, and annoying the hell out of your opponent, then Cubelock is the right Hearthstone deck for you. 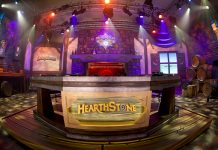 The State of Hearthstone Esports: What's Next?