Dota 2 Craig Linscott -
-996
Silencer Here is a Hero that can silence entire stadiums of screaming fans. A fun trend that is going around in the larger LAN tournaments...
If Quas can return to his 2014-2015 form, Tempo Storm could be the favorite to win the NA CS this spring.

The organization’s newest recruits will join the European duo of Aleš “Freeze” Kněžínek and Jørgen “Hatrixx” Elgåen, who signed on Dec. 8 to compete in the upcoming 2017 North American Challenger Series Spring Split. With the additions, Tempo Storm appears to have formed the most competitive lineup in a circuit that has been stacked with talent this offseason.

Quas, one of the region’s best top laners during Seasons 4 and 5, returned to the professional scene this summer with NRG Esports. His re-entry LCS was a disappointment however, ranking ninth in starting top laners with a 1.9 KDA leaving NRG with a 4-14 record and eventual relegation.

“After my underwhelming last showing in LCS, I’m looking to get back on top form and compete to the best of my ability,” he wrote in the announcement. “I like my chances of qualifying back into the LCS with Tempo Storm, and I’m excited to see how much I can contribute to the growth of this newly-formed line-up.”

Sheep, the team’s support player was last seen on Cloud9 Tempest in 2015 before quietly retiring for a year. His previous LCS experiences stems from his brief time on Team Coast.

The team’s jungler, Zentinel, made his rookie debut with P1 this summer in substitution for Rami “Inori” Charagh. His time on stage was quite underwhelming, holding a 2-12 overall game record with P1 while ranking near the bottom of most statistically categories for junglers, per Oracle’s Elixer. 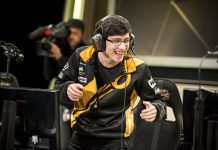