As anyone who has played ranked in the past month can tell you, Hearthstone is in an incredibly fast meta at the moment. In fact, this may be the fastest meta that Hearthstone has ever experienced post-beta. Why is this the case? And what are the repercussions of this? The reason the meta is so fast at the moment has a lot to do with two cards, Warsong Commander and Mysterious Challenger.

Warsong Commander used to be part of the notorious Grim Patron deck, renowned as one of the most overpowered decks in the game. It was enough of an issue that Blizzard eventually nerfed the deck by practically deleting Warsong Commander, one of the key pieces of the deck. Since Grim was such a dominant deck, the whole meta had shaped around it, so understandably the meta was shaken up quite a bit when it was deleted, or at least removed from its tier one status.

How does this cause the rise of aggressive decks? Well Grim Patron may have been overpowered, but it was also the absolute best deck for taking out really fast decks, such as Face Hunter. It had a lot of low cost cards with board clear included, and ran with the warrior hero power, which gave survivability. Because it was so prolific, the fact that Grim Patron existed kept these incredibly aggressive decks out of the meta almost entirely. Now that it is gone, a void has appeared from which spawned hundreds of aggressive decks. 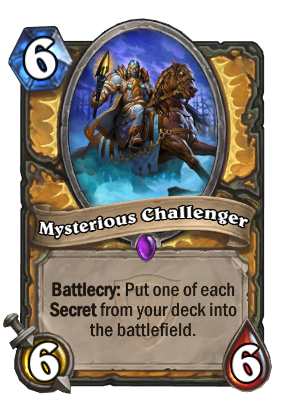 Which brings us to the second card currently shaping the meta: Mysterious Challenger. As anyone who has played against can tell you, Mysterious Challenger is a force to be reckoned with, and widely regarded to be the strongest card in the game at the moment. It provides a huge late game burst to aggressive Paladin decks who would have normally petered off late game, and birthed a deck all of its own, Secret Paladin, the newest tier one deck since the disappearance of Grim Patron.

The issues that Secret Paladin present are largely based around the strength of each of their cards individually. Paladin already has the best two and three drops in the game in the form of Shielded Minibot and Muster for Battle. They curve outwards into a myriad of strong four drops, and then on turn six they play Mysterious Challenger, sealing the game around the time when most control decks are starting to get their legs under them. Even if the midrange or control decks are able to survive such a huge turn six, the Secret Paladin decks typically also run Dr. Boom, the strongest seven drop, and Tirion, the strongest eight drop. And because Mysterious Challenger thinned out the Paladin’s deck so much, the odds of them hitting these powerhouse cards is much higher than a typical deck could expect.

But all decks have a downside, so what is Secret Paladin’s? Well, if Secret Paladin loses the board, it has a difficult time recovering it. So the way to beat it is to be faster. This spawned new decks such as Aggro Druid, and rebirthed older decks such as Face Hunter and Tempo Mage, all designed around keeping control of the board during the early turns and pushing through so much damage that their opponent simply can’t retaliate.

Every meta is shaped by the strongest deck, as everyone is trying to beat it. When the strongest deck was Grim Patron, there were many different ways to beat it, and people could play anything from Aggro to Control, as long as they knew how to play against the deck (and had some luck). Now that the strongest deck is Secret Paladin, the only way to counter is by playing other extremely aggressive decks, creating an incredibly fast meta and almost entirely edging out control decks.

What many players have complained about here is the lack of skill that this meta promotes. There isn’t a way to play around turn one Leper Gnome turn two Knife Juggler other than simply having a fast start yourself. Which means that you either play an aggressive deck yourself, or hope for your early answers in your opening hand. As many players have stated: “oh, no two drop? Guess I lose.”

Firebat, a professional Hearthstone player and 2014 World Champion, came out yesterday and said “The thing that upsets me is the fact that Hearthstone became a game where the best possible play is playing the best step for step minion on curve”. This has been a common complaint, as slower decks simply cannot find a place in this meta. Kripparrian, a huge voice in the Hearhstone community and one of the biggest content creators/streamers, put out a video a few days ago asking “How fast is too fast?”

So, is the meta too fast? Most players seem to think so. Will Blizzard leave it where it is, or attempt to change it? Will the next expansion include many defensive cards to combat this extreme aggression? Or will we see turns five to seven as expected lethal turns for some time to come?

Previous articleAre You Ready for BlizzCon?
Next articleTempo Mage Guide