The Kobolds and Catacombs reveal season is in full swing, and Blizzard is pumping out details about the new Hearthstone expansion. One of the features players will get to see in Kobolds and Catacombs is a new mechanic called Recruit, and it’s certainly going to be interesting to see how players make the most out of it.

How Does The Recruit Mechanic Work?

When Recruit goes off, it pulls a minion out of your deck and puts it into the battlefield. The minion does not activate its Battlecry (if it has one). You might be thinking you’ve heard this before, and you’re right. Barnes, who was introduced in League of Explorers, had a very similar ability.

The difference is that in Kobolds and Catacombs, Recruit will often be attached to additional keywords and/or restrictions. 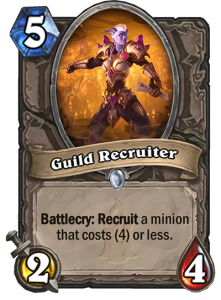 For example, Guild Recruiter’s card text tells you to “Recruit a minion that costs 4 or less,” which means you can’t pull off any Y’Shaarj shenanigans with him. And Kathrena Winterwisp, one of the new cards we’ll be covering in tomorrow’s article, has card text that clarifies that the Recruited minion must be a Beast.

Out of the new cards we’ve seen so far, Blizzard has only included one instance where the Recruited minion doesn’t have to meet certain criteria. and that’s a card called Gather Your Party, a six mana Warrior spell that simply Recruits a minion.

(In case there’s any confusion, Recruit doesn’t let you choose the card that gets brought into play. The minion you Recruit is selected randomly out of all the minions in your deck that match whatever specifications are listed on the card that has Recruit.)

Unlike the ability used by Barnes, the minions summoned by Recruit will retain their original statlines. You won’t have to deal with 1/1 Sylvanases, you’ll be dealing with 5/5s. However, you should keep in mind that with Recruit, the minion you bring into play will actually be removed from your deck. This means that N’Zoth won’t be summoning multiple Sylvanas or Cairnes because you managed a lucky Recruit. It’s a much more balanced way of designing an ability that has high potential for unbalanced results.

Check back tomorrow for an in-depth look at three of the new cards from Kobolds and Catacombs: Kathrena Winterwisp, The Runespear, and Duskbreaker. 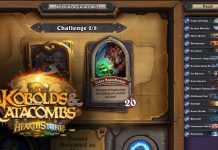