Blizzard is still releasing details about the upcoming Kobolds and Catacombs expansion. We’ve taken a look at the upcoming Dungeon Run mode, and analyzed the new Recruit mechanic. Today, we’re taking a close look at Kathrena Winterwisp, The Runespear, and Duskbreaker.

Kathrena Winterwisp is a new Hunter Legendary, and the card is a good example of how powerful the new Recruit mechanic can be in the right deck. She is an eight mana 6/6 Hunter legendary, and her card text reads: “Battlecry and Deathrattle: Recruit a Beast.” You might assume that limiting the cards you can Recruit would be bad, but this card really shows the potential of Recruit. 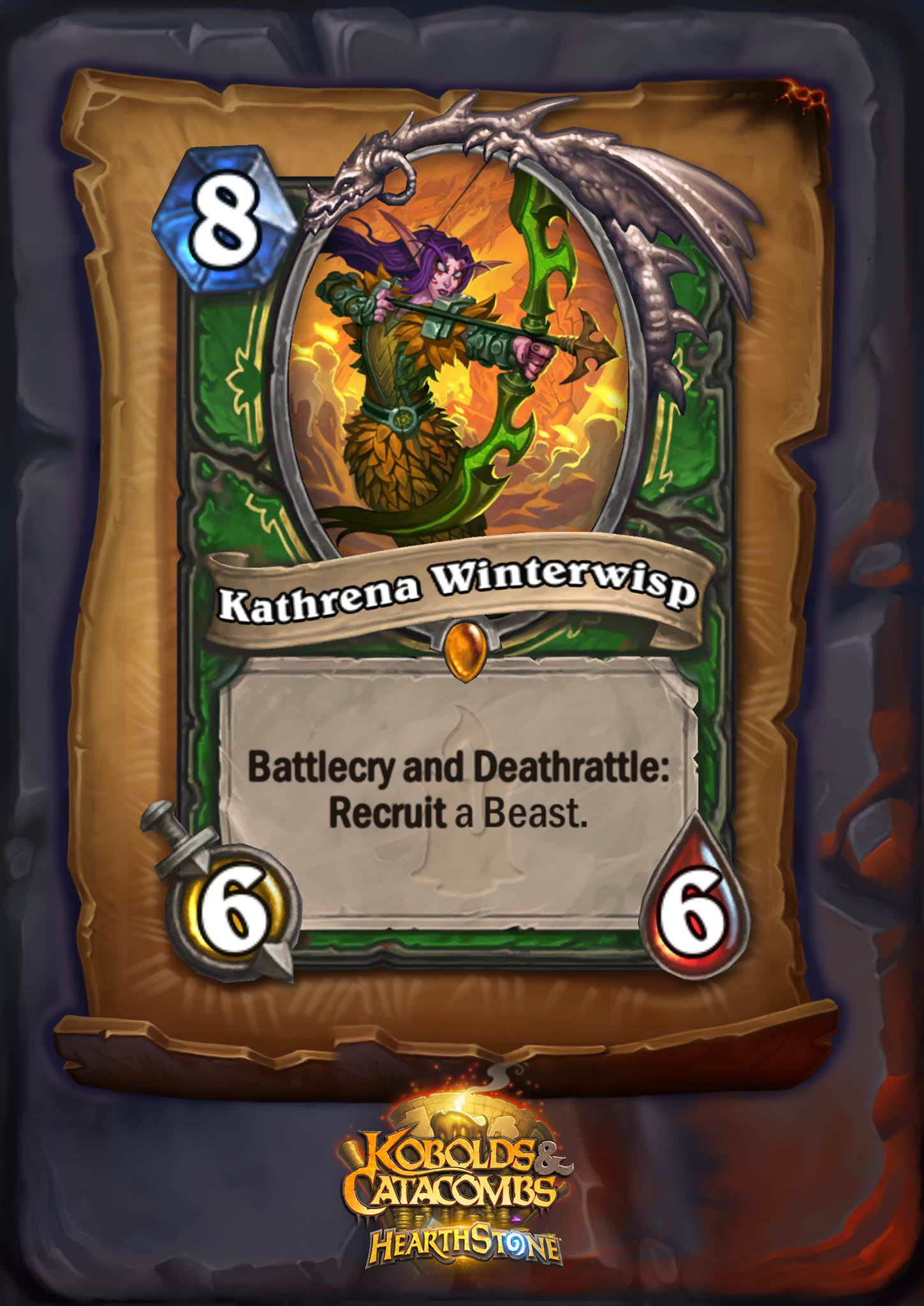 Because Kathrena can only Recruit Beasts, you can create a Hunter deck that has very few Beasts in it. That certainly can be difficult, but achievable. The only Beasts you’d put in the deck would be ones you specifically want to pull with Kathrena’s Recruit. Good choices for Beasts in a deck built around Kathrena include King Krush, an 8/8 with Charge, or Charged Devilsaur, a 7/7 with Charge. The great part about Charged Devilsaur is that summoning it with Kathrena’s Recruit means you’re available to avoid activating the Battlecry—“Can’t attack heroes this turn—and deal damage to your opponent immediately. If you’re playing a slower deck with Kathrena in it, you can even run cards like Giant Mastodon for a massive Taunt.

And because Kathrena only pulls Beasts, you can decide exactly what she’s going to bby leaving it as the only Beast in your deck. The only downside here is that you can draw the Beast card you put in before you draw Kathrena, which is sub-optimal. To be on the safe side, you’ll want to keep a couple other strong Beast cards in your decks to make sure you get the most out of her Recruit.

There’s a lot of potential here, if a strong enough Hunter deck can be made that doesn’t use the early Beast package. You can even throw in Abominable Bowman, who brings back dead Beasts.

All in all, Kathrena is an 8 mana 6/6 that can bring a 7/7 minion with Charge on to the board when she enters and when she exits. That’s insane. Kathrena can even be paired with cards like Play Dead to give you a board full of Chargers or Taunts. However, I don’t think the card is strong enough to feature in professional play, but Kathrena Winterwisp will definitely make some great montages.

The Runespear is a new legendary weapon for Shaman. It’s an eight mana 3/3 weapon, and the card text reads: “After your hero attacks, Discover a spell and cast it with random targets.” 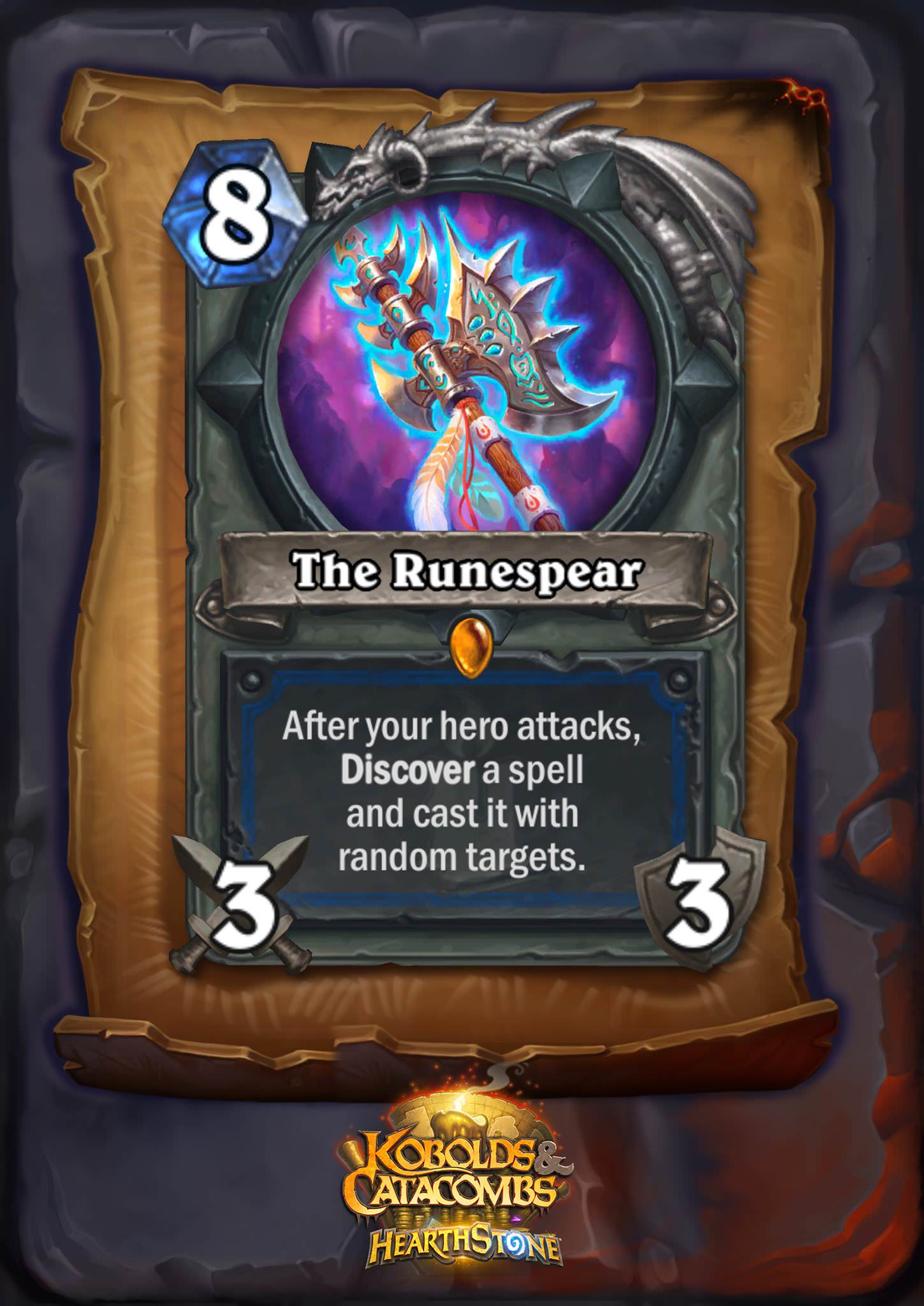 In all seriousness, this card is garbage. Shaman spells tend to be low cost, so you’re unlikely to pull off something incredible with the weapon.  Add in the fact that the spell is targeted randomly, and it’s clear that The Runespear is a terrible, gimmicky card.

If Shaman had a strong control deck, Runespear might be viable. Maybe. If you have no minions in play, grabbing Hex or Stormcrack with Discover means these spells would only target your opponent’s minion.

Volcano would be a nice spell to pull using Runespear. But most Shaman spells that do anything significant have the potential to hurt you. There are a decent number of Shaman spells that buff minions, and you obviously don’t want to give your opponents a free damage boost.

Basically this card has nearly as much potential to hurt you as help you. There are only a handful of spells that are good all the time (Maelstrom Portal, Devolve, Call in the Finishers), and they aren’t even close to worth the cost attached to this card. A 3/3 weapon is worth around three mana, so you have to get five mana of value out of the spells, except it’s spread over three turns, so you should be getting much more value at this late in the game. Oh, and all of this is assuming the Overload doesn’t affect you, which it very well might. Bottom line: garbage card, please don’t let me ever open it, if this makes it into competitive I’ll eat my shoe or something.

Duskbreaker is a new Priest rare minion. It’s a four mana 3/3 Dragon with card text that reads: “Battlecry: If you’re holding a Dragon, deal 3 damage to all other minions.” The reason I included a rare minion here is that Duskbreaker might be strongest card from Kobolds and Catacombs that Blizzard has revealed thus far. 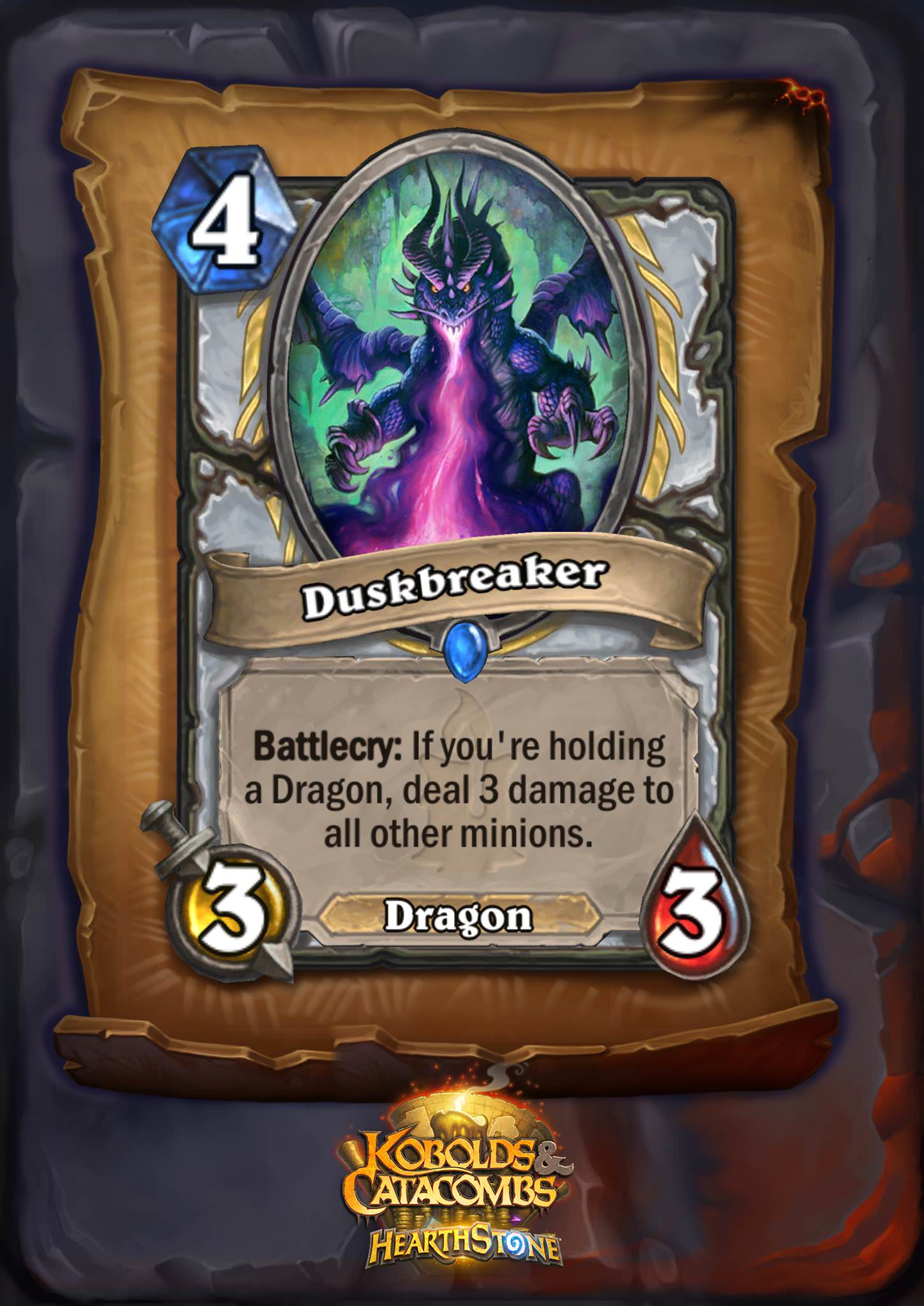 Dragon Priest has been strong for a long time, and until Drakonid Operative leaves in four months, there’s no reason to expect Dragon Priest decks to go away before that happens. Most Dragon Priest decks use the Control Priest package and rely on Dragons to close out the game. This new Dragon fits in with that approach perfectly. It bears repeating that Duskbreaker is a four mana minion that deals 3 damage to all other minions when it enters play. In other words, Duskbreaker is literally an Excavated Evil, except it costs one less mana and has a not-too-shabby 3/3 statline. Anyone who thinks this card isn’t amazing is off their rocker.

However, Duskbreaker does have some drawbacks. You must have a Dragon in your hand for the effect to go off. Currently, the most popular Dragon Priest decklist has six Dragons in it. If we take out two other cards from that decklist to add two Duskbreakers, then that deck now has eight dragons. The earliest you can play Duskbreaker is turn three with coin, and turn four without coin. By that point, you will have drawn seven cards – six not including the Duskbreaker itself. Let’s assume you draw Duskbreaker in your opening hand. If we include mulligans, this means that you’ll have between six and ten attempts before turn three/turn four to draw one of the other seven dragons left in your deck. (This is assuming, of course, you’re going to bring Duskbreaker into play as soon as possible.)

Here’s how the math works when you have Duskbreaker in your opening hand.

Will you be able to get the Dragons you need every time? Definitely not. Will you be able to utilize Duskbreaker’s Battlecry most of the time on turn four? Probably. Just like every Dragon deck ever, the success rate of these decks relies on players holding onto their Dragons until the time is right, and a little bit of luck. We’ve seen very strong Dragon Priest decks in both the past and present, and Duskbreaker is going to be a powerful addition.

Previous articleHearthstone’s New Druid, Rogue, and Neutral Legendaries
Next articleKobolds and Catacombs: How Does the Recruit Mechanic Work? 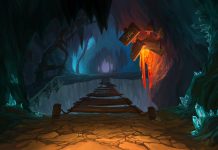