The release date for Kobolds and Catacombs is right around the corner, and it’s time to take a closer look at three of the new legendaries from the upcoming Hearthstone expansion: Twig of the World Tree, Sonya Shadowdancer, and King Togwaggle.

Twig of the World Tree is a four mana 1/5 Druid Weapon. The card text reads “Deathrattle: Gain 10 mana crystals.” Obviously this effect is extremely powerful, but you’re going to have to play around with it a bit to make it work. If you just play the card and attack every turn, the effect will go off on turn eight, and that doesn’t quite justify your initial four mana investment. But if you can double Innervate it out, you’ll get ten mana crystals on turn six. Still, that’s not exactly worth it, since you use three cards to do this, and you have to actually survive until turn six.

But there are definitely ways to combine Twig of the World Tree with other cards. All you have to do to destroy it is equip another weapon. Unfortunately, Druid has no other weapons, so this is a bit tricky. The best way to get around this is by adding Blingtron to your deck. As luck would have it, Blingtron is a five mana card, which means you can curve perfectly into this two card combo. Turn four Twig, turn five Blingtron. Getting ten mana on turn five is pretty damn nice, in case you were wondering.

The best part about Druid’s new legendary is that when Twig of the World Tree’s Deathrattle goes off, your mana is totally refreshed, and that means you can play two big cards in one turn. For example, if you play Medivh, it kills off the Twig and you’ll gain 10 mana, and you can play another ten mana card immediately. The ability to bring out multiple high-cost cards in a single turn is this card’s saving grace. In most scenarios, Twig of the World Tree isn’t great, but the potential combos allows it to stray into the realm of “interesting.” At the very least, we can expect plenty of amusing montages to come out of this card.

Sonya Shadowdancer is a three mana 2/2 Rogue minion. The card text reads: “After a friendly minion dies, add a 1/1 copy of it to your hand. It costs (1).”

This is the best Rogue card ever printed. And Sonya Shadowdancer has one of the strongest abilities–on any card–that we’ve ever seen in Hearthstone. The fact that it synergizes perfectly with Rogue only makes it stronger. In fact, I can’t think of a single Rogue deck that wouldn’t want to run this card.

To prove this point, let’s take a quick look at the current Rogue decks. With Tempo Rogue, you could use Sonya’s ability on any of the following minions and be happy: Fire Fly, Swashburgler, Prince Keleseth (utterly ridiculous), Edwin VanCleef, SI:7 Agent, Vilsepin Slayer (crazy), Bonemare (haha). I’m skipping a couple other notable mentions here, but it’s fairly obvious that nearly every card in a Tempo Rogue deck works well with Sonya Shadowdancer. Pirate Rogue offers most of the same options as Tempo Rogue, and so does Miracle Rogue, although the latter also includes Auctioneer, Questing Adventurer, Xaril, and Bloodmage Thalnos.

You get the idea.

What makes Sonya Shadowdancer insane is that you can play the card on your turn and instantly make use of her ability through trading. Once Sonya is in the game, every player’s goal against Rogue will be to keep their board clear at all times. Once Kobolds and Catacombs comes out, the default strategy against Rogue will mostly involve leaving good-but-not-amazing minions on your opponent’s board to bait out Sonya. And if you’re able to deal with her, you can play a normal game of Hearthstone. She’s going to change absolutely everything about the Rogue matchup, and Sonya Shadowdancer is one of the best Hearthstone cards printed in a long time.

It’s only fitting that we go from the best of the three new Hearthstone legendaries, Sonya Shadowdancer, to the worst, King Togwaggle. King Togwaggle is an annoyingly named eight mana 5/5 neutral minion. It reads “Battlecry: Swap decks with your opponent. Give them a Ransom spell to swap back.” The Ransom card you give them is a five mana spell that simply reads “Swap decks with your opponent.”

King Togwaggle does open the door for some intriguing combos. Reddit user ToMcAt67 has taken the time to point out many of them, so I’ll just leave his comment linked here.

Here’s what you need to know: King Togwaggle has no real potential. This is because of the fact that it comes down to your opponent to use the Ransom card. If you do something to mess up their deck, they can Ransom and grab yours. And if you run a bad deck on purpose with King Togwaggle to screw them up, they can take their original deck back.

There are a few ways you can make King Togwaggle work. You can play a Mage and use Counterspell. If you hit the Ransom card, you can mess up their combo.

Boom. You just took your opponent’s deck and left them with zero cards. You pass the turn, they try to draw, and start taking Fatigue damage. Now they have to play a five mana card to get themselves out of Fatigue, and they also have to deal with the 5/5 and 6/6 you just brought out.

Unfortunately, after they swap back using the Random card, you’re basically screwed. If you have a Lorewalker Cho on the board, or can use Brewmasters to play Togwaggle again, you can force them to take more Fatigue. But if they’re able to play the five mana Ransom spell, your combo grinds to a screeching halt, and you lose the game. King Togwaggle is kind of amusing, but it’s definitely not a good card. 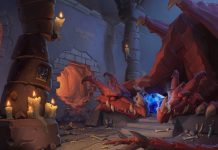