This guide will be a bit different than usual, mostly because Jade Druid is a very easy deck to play, for the most part. Rather than discussing more advanced options, we’ll do an overview of the basics, then discuss tech cards and reasons to play the deck. Jade Druid is somewhere between midrange and control, based on what opener you get. However, because of Jade Druid’s simplicity, most matchups are decided based on class choice. We’ll go into that below.

This is a basic decklist that Kolento created on one of the first days after Mean Streets launched. Since then, Jade Druid has undergone practically no changes. The changes you’ll see are mostly tech cards, with a few slightly different lists. We’ll talk about tech cards below as their own section.

A lot of the Jade Druid playstyle is around playing on curve. We weren’t lying–this really is a very easy deck to pilot. Your hardest decisions will be built around Innervate and Nourish, typically. Innervate is often a very straightforward card. You want it in your opening, and you want to use it to make big things early.

The big exception is knowing when to Innvervate, or Coin, for more ramp, rather than minions. Basically you want to look at what you can do in following turns with the extra mana. If you have a play that perfectly fits the next two turns because you coined out Wild Growth, do it. If not, realize that waiting a turn and playing the Wild Growth then will allow you to keep the coin. The decisions tend to be fairly simple, except when you’re against aggressive decks. Then you have to decide if you want to coin Wild Growth or coin Wrath, etcetera.

Nourish, on the other hand, you have to decide if you want more ramp or more cards. It will often depend on the matchup, as well as your current hand size. Innervating out Nourish for ramp is often a great play to get the edge. Imagine you simply played two Wild Growths on turn three, as well as being able to hero power.

When Should I Play Jade Druid?

Since a lot of the deck simply plays itself, much of the win rate variance comes from reading the meta. Jade Druid has a lot of matchups that are skewed highly in both ways. They are extremely bad against aggressive decks. If your current meta is filled with Aggro Shamans and Pirate Warriors, do not play Jade Druid. You don’t have the removal or the sustain to ever get your golems rolling. Obviously you’ll eek out a few wins, but this matchup is highly skewed in their favour.

On the other side, if you play against a lot of Reno decks, or control in general, Jade Druid is perfect. If they don’t have a gameplan to kill you before turn ten, you can likely overpower them. Simply playing a progressively bigger minion every turn will quickly take up all their removal. Then you simply have to keep yourself alive while pumping out golems. If you ever get to the point where you have the board, you tend to win. If you see a lot of control, play Jade Druid.

This is the other place where the decks vary. The gameplan doesn’t really change, the tech cards are simply in it to help you survive. You’ll always be the biggest kid on the block in fatigue, the goal is to get there. If you’re encountering a lot of aggro, but not enough that you don’t want to play Jade, then you need to tech in cards to help swing the matchup back in your favour. Acidic Swamp Ooze is the biggest one here, for an early play and weapon removal. You’ll also want a second Feral Rage.

If you’re seeing a lot of control, those cards aren’t as necessary. Instead, you’ll want more cycle. The big one here is a second Auctioneer. You’ll be playing for fatigue, and being able to cycle a ton of Jade Idols is a huge play.

In both cases, the card you’ll want to remove will likely be Raven Idol. They are good versatile cards if you don’t know what the meta is. However, if you do know, you’ll typically just want the other, better card to counter it. Obviously play around and remove what you feel is best! Have fun with it!

Previous articleShamanstone: A Dedication
Next articleHearthstone’s Class Balance Is Awful 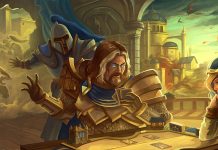