Dota 2 Eugene Torubalko -
-42
How to Build Tinker Effectively This DotA 2 Tinker guide is useful for those of you who want to...
Featured image via Hearthstone Top Decks.

You might be thinking to yourself that Hearthstone has had Elementals for a while. And you’d be right. But also wrong! Elementals have been in the game since release. However, they haven’t ever had their own tribe before. They were Elementals, but in name only. This will change with the release of Journey to Un’Goro. Blizzard will release a host of new cards with the Elemental tag, as well as add the tag to many of the old Elemental cards. These will all be subject to ‘Elemental’ card interactions, just like Mechs, Beasts, and Murlocs. Let’s take a look at which cards will change, and some of the new ones that were revealed.

Most of the cards that are slated to become “true” Elementals in Journey to Un’Goro shouldn’t surprise you–Water Elemental, Fire Elemental, and Unbound Elemental, for example. But there are also a few more unexpected cards that will be joining the Elemental ranks. One of the big ones is Al’Akir the Windlord. His mana cost doesn’t quite fit with the other Elementals we’ve seen so far, but he still gets the tag. I’d be surprised if we don’t see a way to incorporate him into Elemental decks.

One of the ‘new-old’ Elementals who’s potentially being overlooked is Arcane Anomaly. The card is quite good in its own right, even without the Elemental tag. But the low cost is perfect for playing a bunch of Elementals in one turn, which seems to be the intention. You can see the full list of Elementals switching over here.

The new Elementals come along with a new mechanic. It doesn’t have a keyword, but so far it is exclusive to the Elemental tribe. Their abilities get stronger based on how many Elementals you played the previous turn. Only two cards have been released that have this ‘mechanic,’ and the first is Stone Sentinel, a Shaman seven mana 4/4. It summons two 2/3 Elementals with Taunt if you played an elemental the previous turn. This is incredibly strong. It’s essentially Spirit Wolves tacked on to a four mana 4/4, but without the overload. This card alone offers a big incentive to play Shaman Elemental Midrange decks. 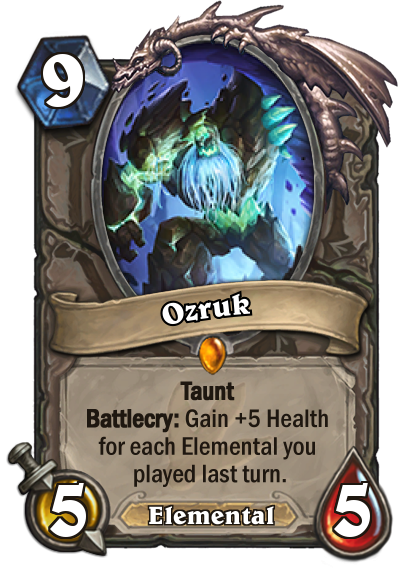 The other card that uses the new mechanic is the Elemental legendary, Ozruk, who is a nine mana 5/5 with Taunt. He gets +5 health for every Elemental played the previous turn. The card sounds really cool, but it’s a bit bland. There’s a reason Soggoth needs to not be targetable to be even remotely decent, and it still doesn’t see play. Even if we end up in a slower Hearthone meta, the most this will ever be is a card that eats a removal spell. Which isn’t inherently bad, it’s just not a strong card when you factor in the nine mana it costs to play Ozruk. That being said, I can see Ozruk working against Jade decks. Druid doesn’t have great removal, so if you can play a 5/15 or 5/20 on turn nine, that could give you the last push you need to win.

There are also a bunch of new small Elemental cards to help this mechanic work. The most notable is Fire Fly, a one mana 1/2 that puts a 1/2 Elemental into your hand. Hopefully more Elementals will be released so that the newest Hearthstone tribe delivers on its promise to shake up the meta. 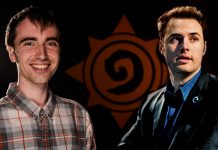