General Stephen Draper -
-6.8k
Path of Exile Shaping Before you start shaping your Path of Exile Atlas, we suggest you read our introduction to the Atlas. Once you have...
Featured photo via U.S. Navy Photographer’s Mate 1st Class Stephen Batiz.

Over the past decade, we’ve seen the rise and fall of many new social media platforms and communication apps. I’m old enough to remember when Facebook came and I remember how quickly people jumped ship from MySpace. Skype replaced MSN Messenger and AIM, Facebook Messenger replaced Skype. And now, slowly but surely, Discord is replacing Facebook Messenger, at least for gamers. In a perfect world, all these ways to communicate would make life more organized, but sometimes I feel like I’m getting lost in the pings–we’re living in the digital age, but nothing beats face-to-face communication, whether you’re in the office or at a PC bang. If you’re part of a gaming community or work remotely in the esports industry, you’ll have encountered programs like Discord and Slack. Are these communication tools actually useful?

It’s hard to recall a time before Discord. The platform was released just over two years ago and has since cemented itself as one of the leading VoIP platforms in the industry. It’s easy to use and accessible from almost any device, smartphones included. It’s hard to find a bad review of Discord, and for good reason. It lets you create online communities where members can communicate effectively and lay the groundwork for larger projects. You’ve got a host of nice features like titles for members, gifs, and standalone voice channels. Discord isn’t just for streamers or teams, it’s for casual users and small communities too. Business professionals can use the app for meetings and interviews and causal users can use it for chatting with friends and gamers across the world in real-time.

There are many aspects of Discord that I adore. I’ve never had it crash while it’s open, I’ve never had delays or missed messages and dropped calls are incredibly rare. That being said, there are a few small complaints I have about the platform. My biggest issue with the app is that while I understand the need for each group to have their own separate group, the number of groups I’m part of keeps growing and, to avoid getting overwhelmed by pings, I end up muting a lot of them. I have a group for cosplaying, Northern Arena, Pro Rivalry League, and many more. It’s tiring to either have to mute the groups or scroll through them to delete notifications. That being said, it’s still my go-to application for causal communication.

Slack has saved me hundreds, if not thousands, of emails over the past two years. All the companies I work for, especially in the esports industry, use Slack as the primary means of communication. Slack is a great way to post schedules, talking about the latest esports news as a group, and for one-on-one conversations when meeting in person or over Skype is inconvenient or logistically difficult. Slack isn’t really designed with causal esports enthusiasts in mind, like Discord, and it functions in a different way. Discord is, at the end of the day, mostly for social use, and Slack is the closest thing we’ve got currently to a digital workplace.

I wanted to love the Twitch Desktop application. I really did. The web platform for Twitch is amazing, and I use it every single day without anything but the most superficial of complaints.

But Twitch Desktop? In its current form, it’s sad and resoundingly half-baked, lacking almost every feature that’s made the in-browser version of the platform so successful. It shares some visual and organizational similarities to Discord. You can add friends, start conversations and call people using voice and video.

What is it missing? Well, for starters, how about the ability to watch streams through the actual application? Twitch chat is as notorious as it is deplorable, and I can understand why they would want to create a platform that’s focused on ‘reforming’ chat. But cannot fathom why the world’s largest streaming service launched a standalone application that doesn’t include streaming functionality. You click on a stream in the Twitch Desktop app, and it opens up your browser and takes you to the page.

If that’s not inefficiency, I don’t know what is.

The thing is, I know exactly what I need from Twitch Desktop. All I want is a piece of software that lets me add my friends into a group, pick a stream, and be able to watch it together and use voice or text chat at the same time. Seems fairly obvious, right?

In its current form, Twitch Desktop is basically a “Discord-lite,” and fails to deliver the experience that you might assume it would. Not really worth a download right now.

Do you agree with my take on these communication tools? Are you the one person who regularly uses Twitch Desktop? Let me know what you think on Twitter.

Previous articleFirst Impressions on Path of Exile: The Fall of Oriath
Next articleStaffordshire University’s Esports Degree: Behind the Scenes 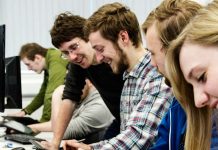